Painting is one of the simplest things you can do to transform the look of a tired, old vintage camper. And from the moment we bought Tilley the Silver Streak, we knew painting her a soft white would do a lot to erase her outdated look while brightening her interior. When we look back at the “before” pictures, she was just sooooo dark! Now she is so light and airy, and we can’t wait until we can finally take her camping! 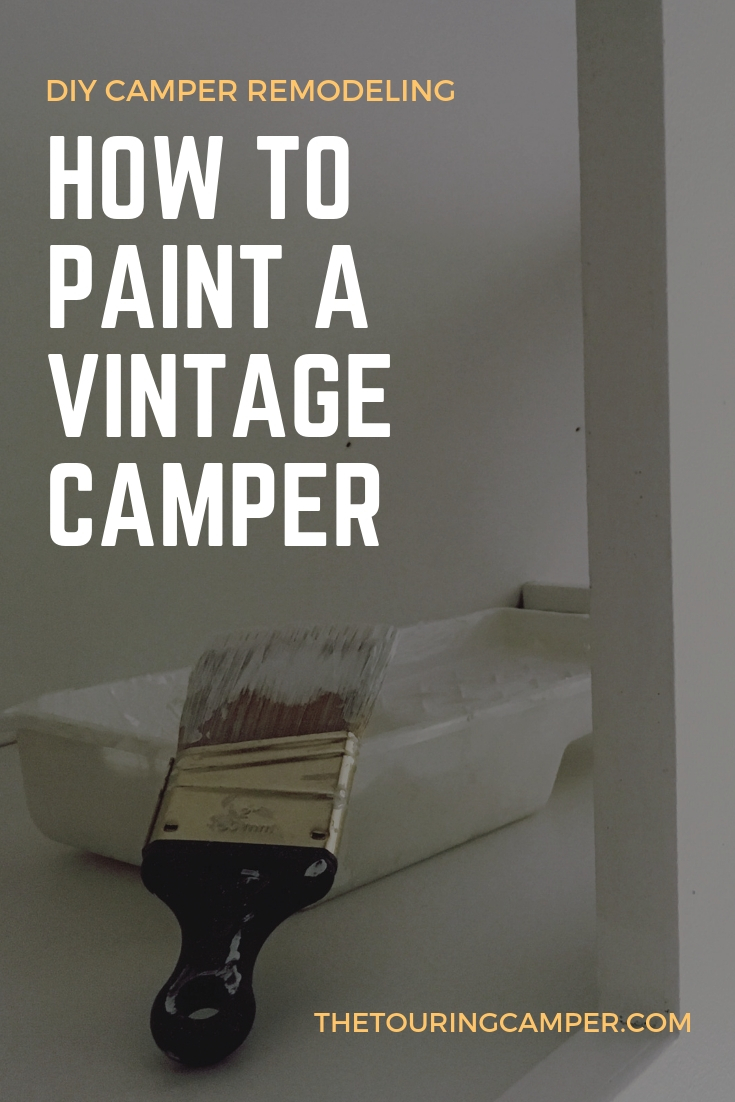 Note: This post contains affiliate links. If you make a purchase through one of the links, we will receive a small commission at no additional cost to you. Thank you for supporting The Touring Camper.

To paint our vintage camper, we started by roughing up the surfaces with fine grit sandpaper. Then after vacuuming up the dust, we used Simple Green to wash down all the surfaces. This was an important step for removing any remaining dust, as well as cutting through the years of greasy grime. Although we had read about using TSP or a deglosser to prep the surfaces for paint, the folks over at Sherwin Williams recommended that we go with Simple Greeen, so we kept things “simple” and followed their advice. 😉

Since most of the camper was getting painted, we didn’t have a lot to cover and protect–just the windows, vents, furnace, and a few other spots needed to be draped or covered in plastic.

The next step was priming. We went with an oil-based primer from Sherwin Williams based upon the recommendation of others who said it would work the best for seamlessly covering all of the various surface types we were dealing with on the walls, ceiling, and cabinets. It is called Extreme Block: Stain Blocking Primer/Sealer. Because it was an oil-based primer, we had to use an airless paint sprayer from Harbor Freight, kind of like this one. Jarrett found that the 10-inch spray tip that came with the sprayer was far too wide to get even passes without excessive overlap (because too much overlap leads to too much paint, which leads to drips–and we don’t want drips!). He bought a 6-inch spray tip that worked much better in the confined spaces of the camper.

Neither Jarrett nor I had ever used a paint sprayer, but thankfully there’s YouTube and lots of great tutorials available. One of the best tips we can offer if you choose to use a paint sprayer for your camper remodel is to start painting in an inconspicuous area. Jarrett began by spraying inside all of the closets and cupboards. This gave him time to get the feel for how the sprayer worked and it helped him learn how fast he needed to move the sprayer to get even coverage without drips. And the fact that there are some paint drips in the closets is of no consequence since they’ll always be hidden. 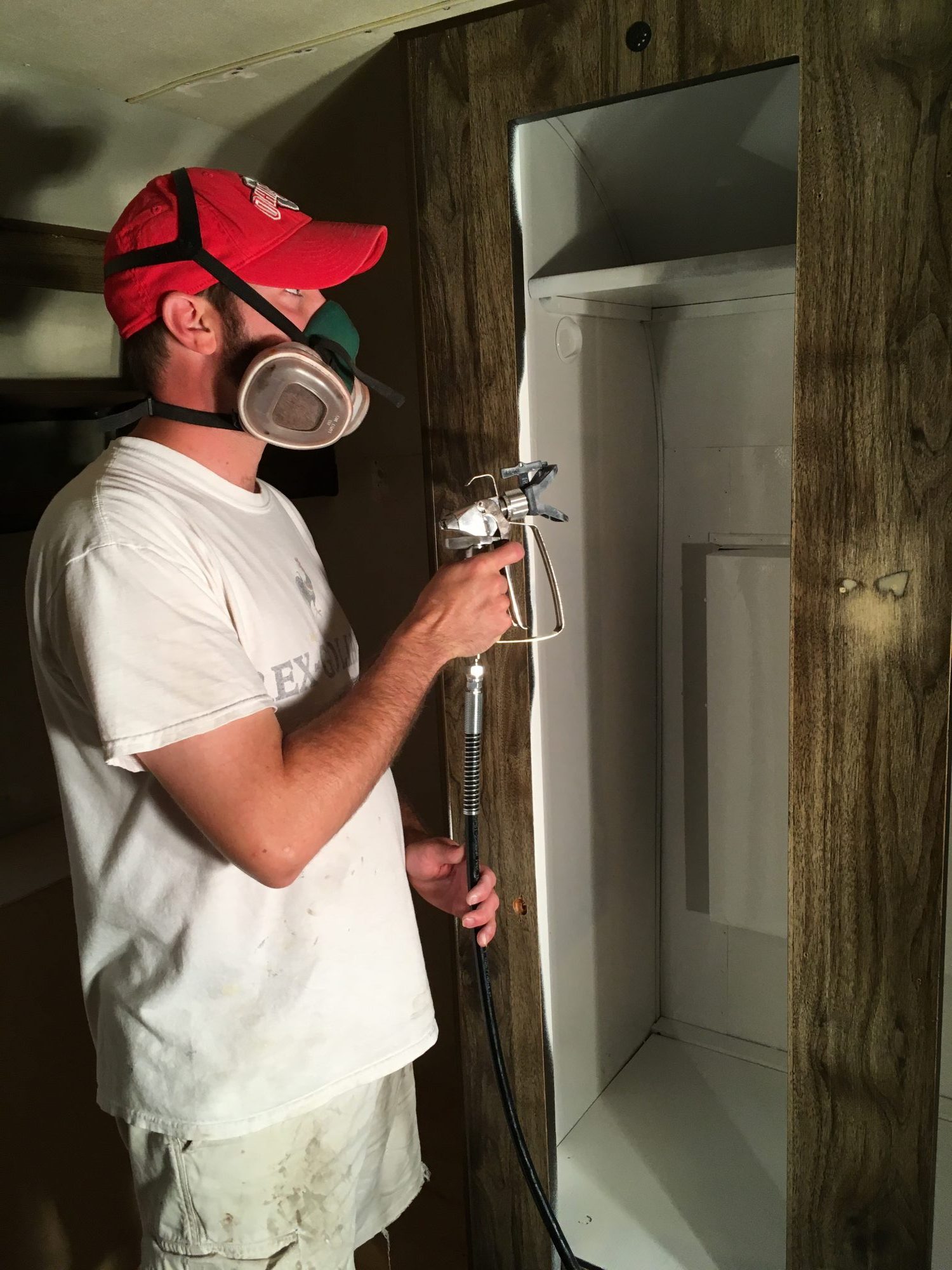 On a side note, it is very challenging trying to take decent pictures when all of the windows are covered and the light fixtures are removed. Ugh! 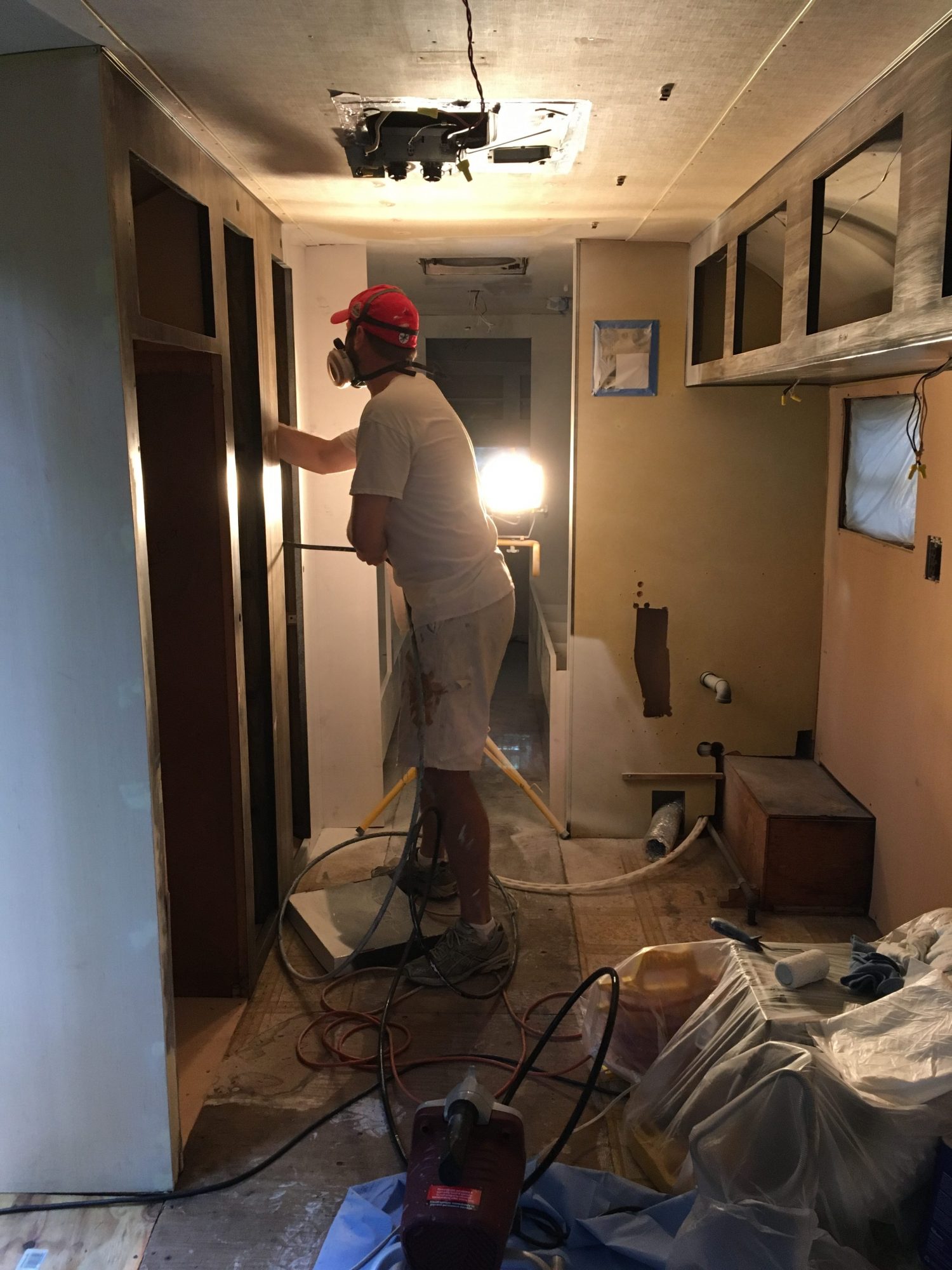 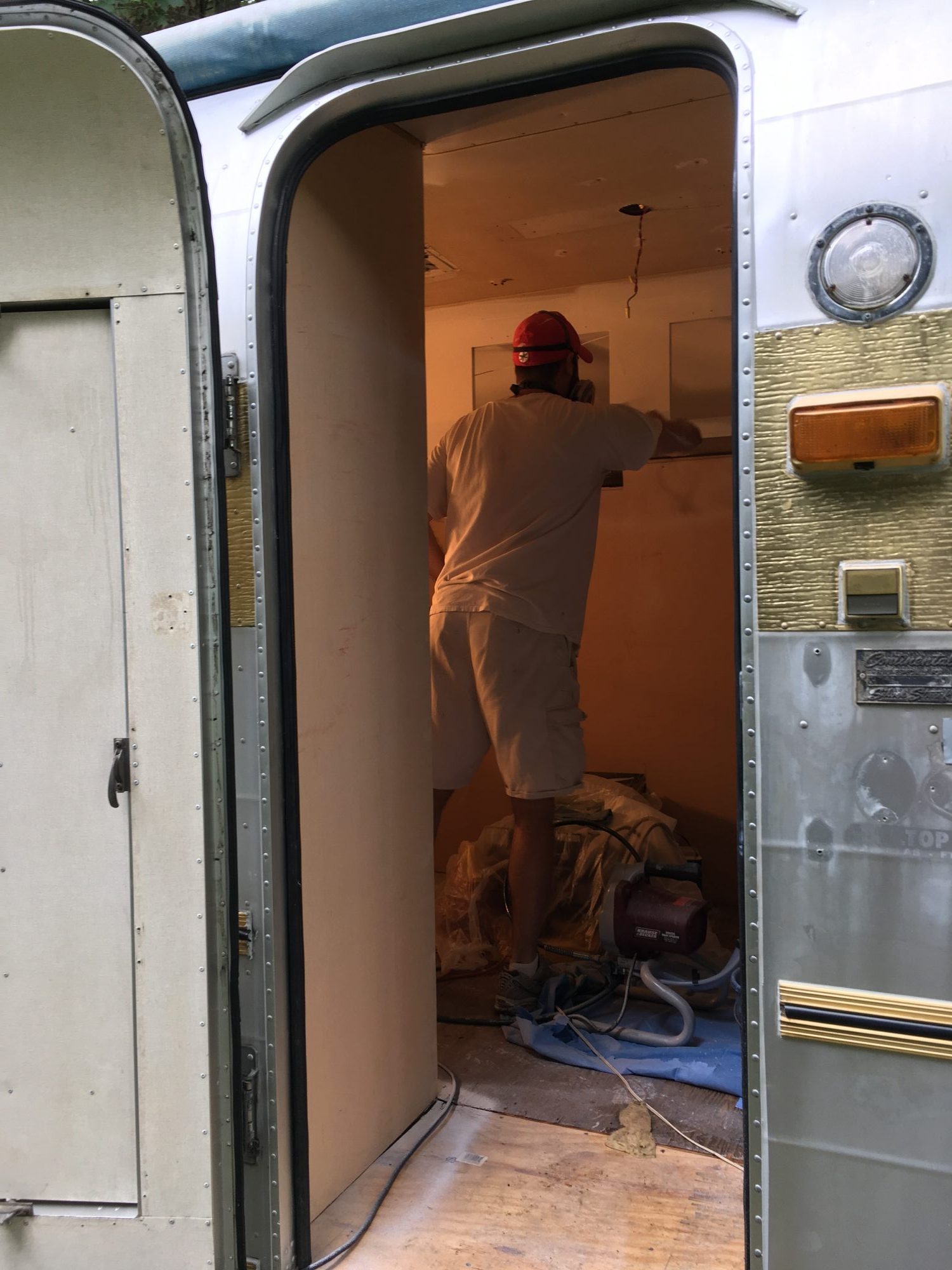 After finishing with the inside of closets and cupboards, it was time to prime the other surfaces. Jarrett found it was a lot easier to keep an even, continuous spray once he was out of the tight areas and into the more open front of the camper. It also went a lot faster! 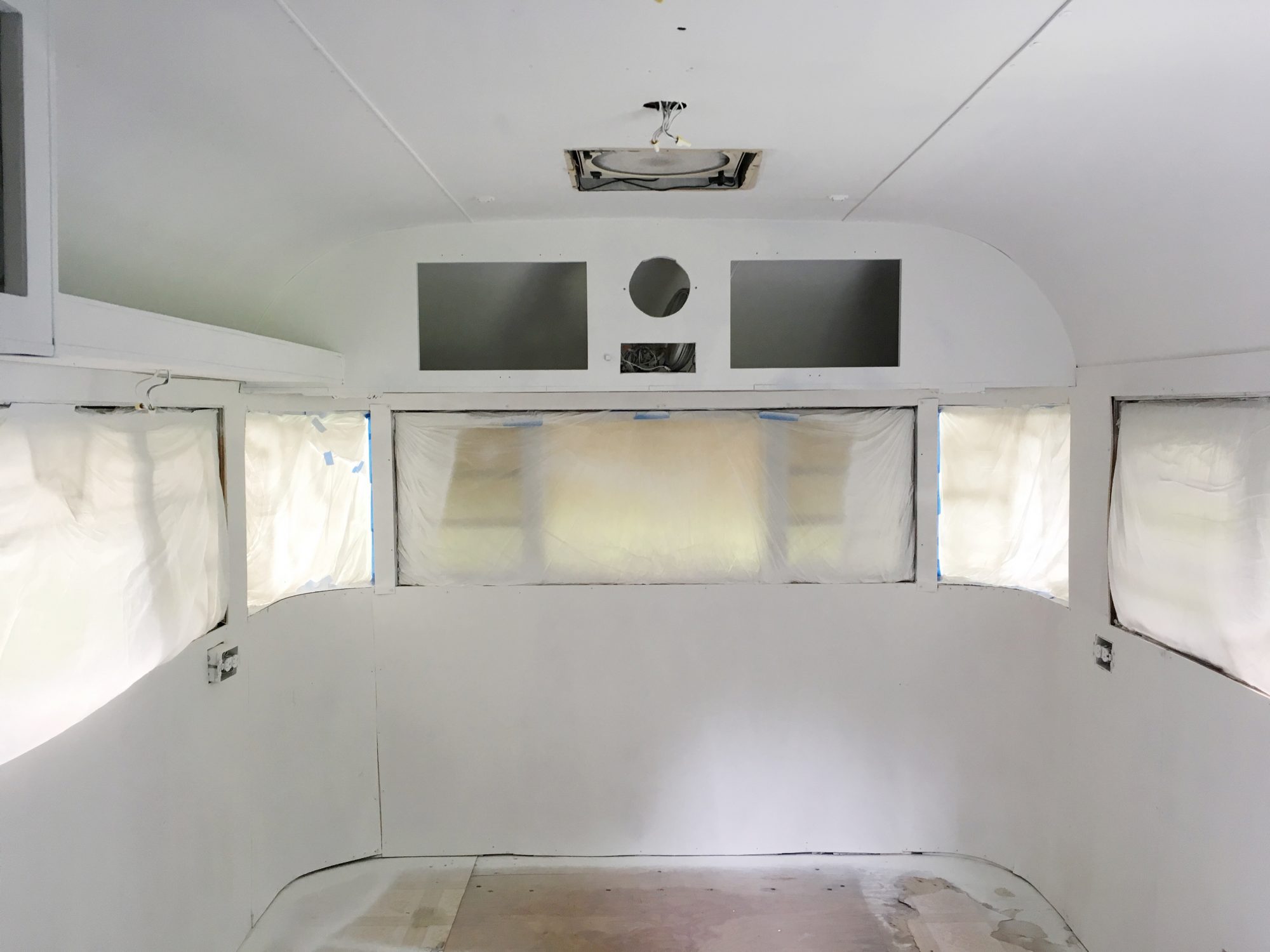 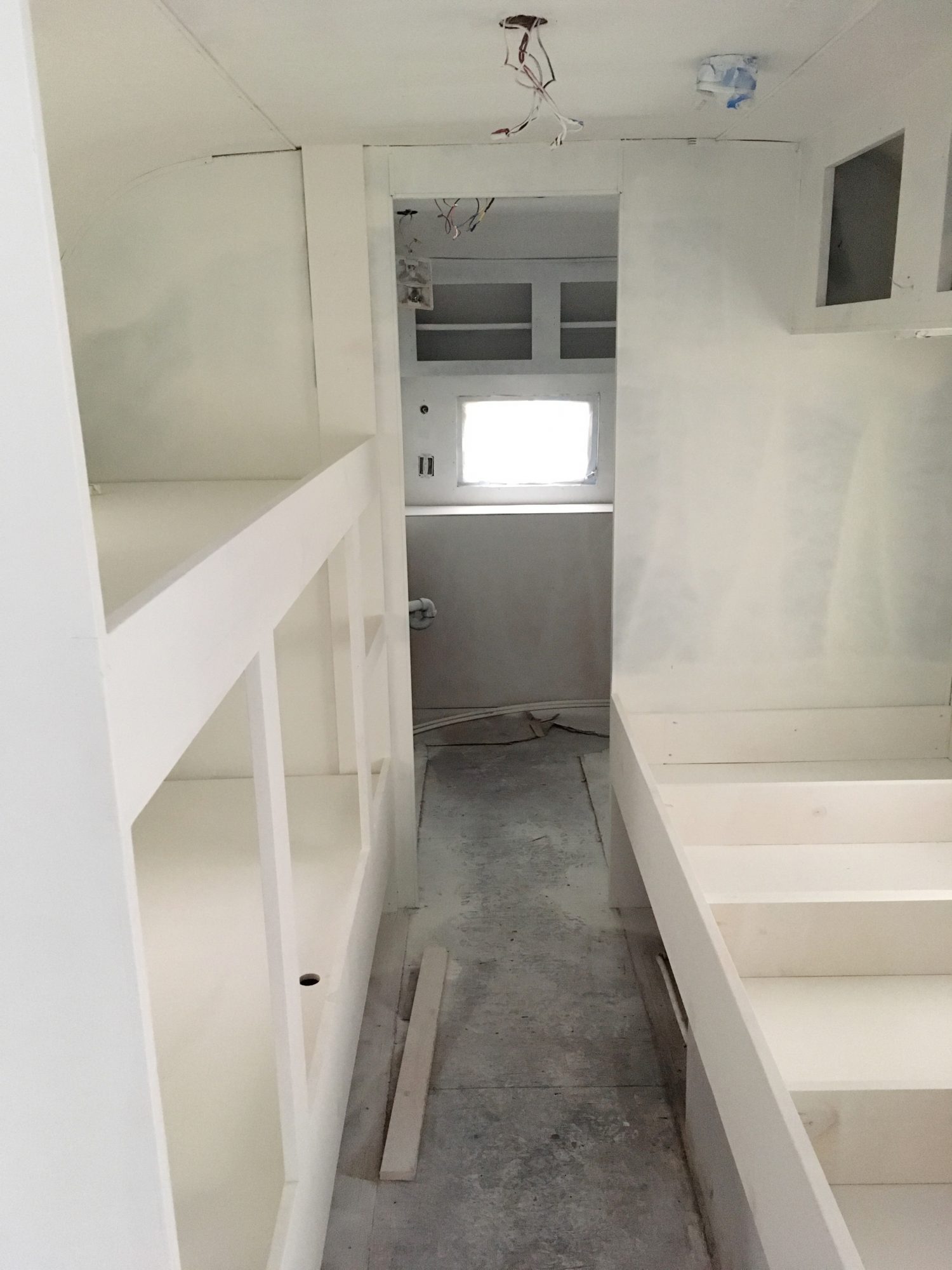 By the time Jarrett was finished with this step, the primer alone had brightened everything up tremendously!

But we weren’t finished. Next came the paint, which we also purchased from Sherwin Williams. Based on recommendations, we went with the Pro Industrial Pre-Catalyzed Waterbased Epoxy (in eg-shel) that we color matched to the Ikea cabinets we are installing. The painting process was the same as with the primer, but we decided to do two coats to ensure a really bullet-proof finish. (I keep saying “we” like I was heavily involved in this painting process, but it was really Jarrett who did most of the work. I was Chief Executive Inspector. 🙂 )

All of the cabinet doors also had to be sanded, primed, and then painted, but due to uncooperative weather, we weren’t able to spray paint them at the same time that Jarrett was painting the camper interior. So I ended up just using a brush and mini roller to paint them one sunny day. 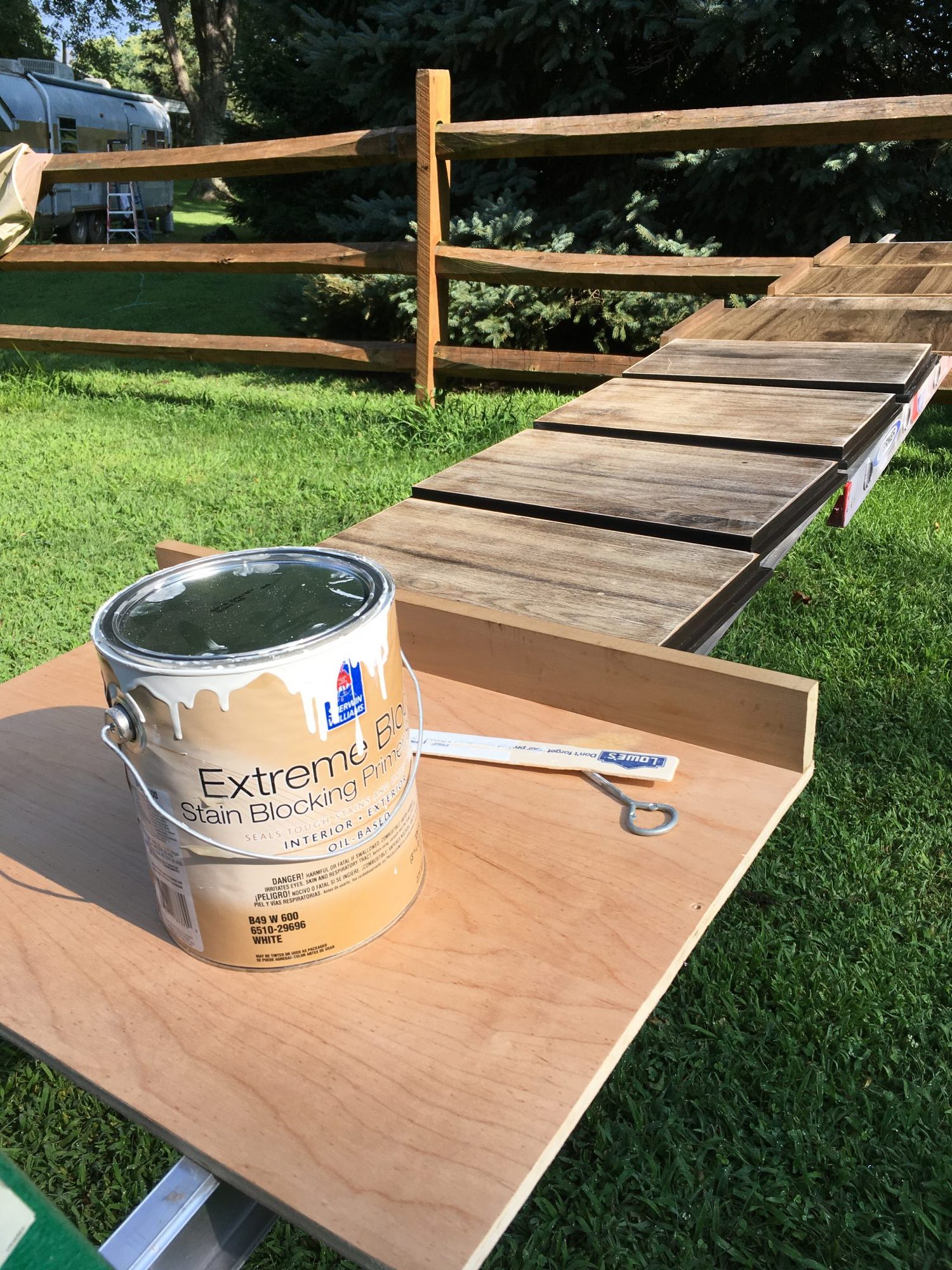 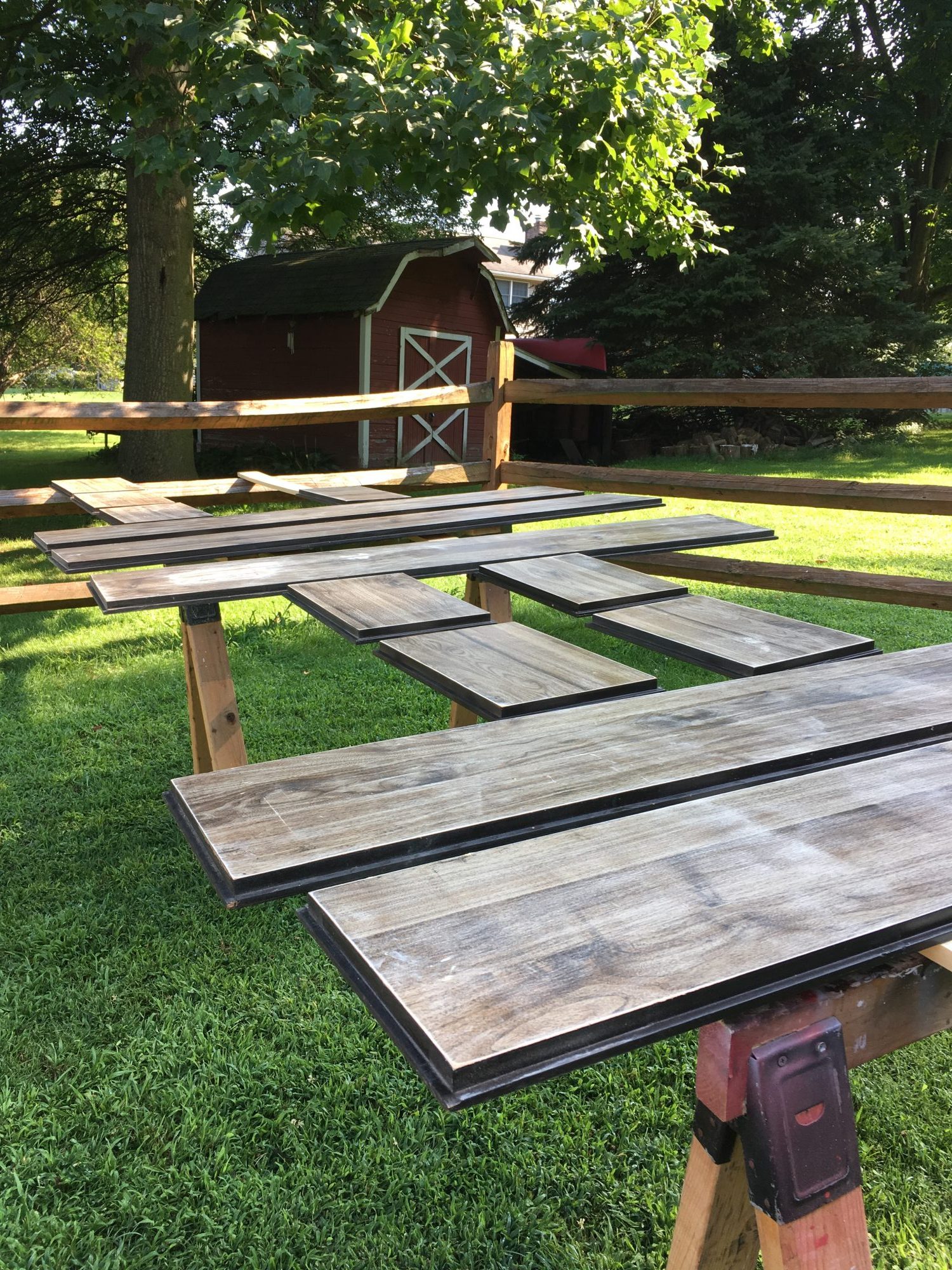 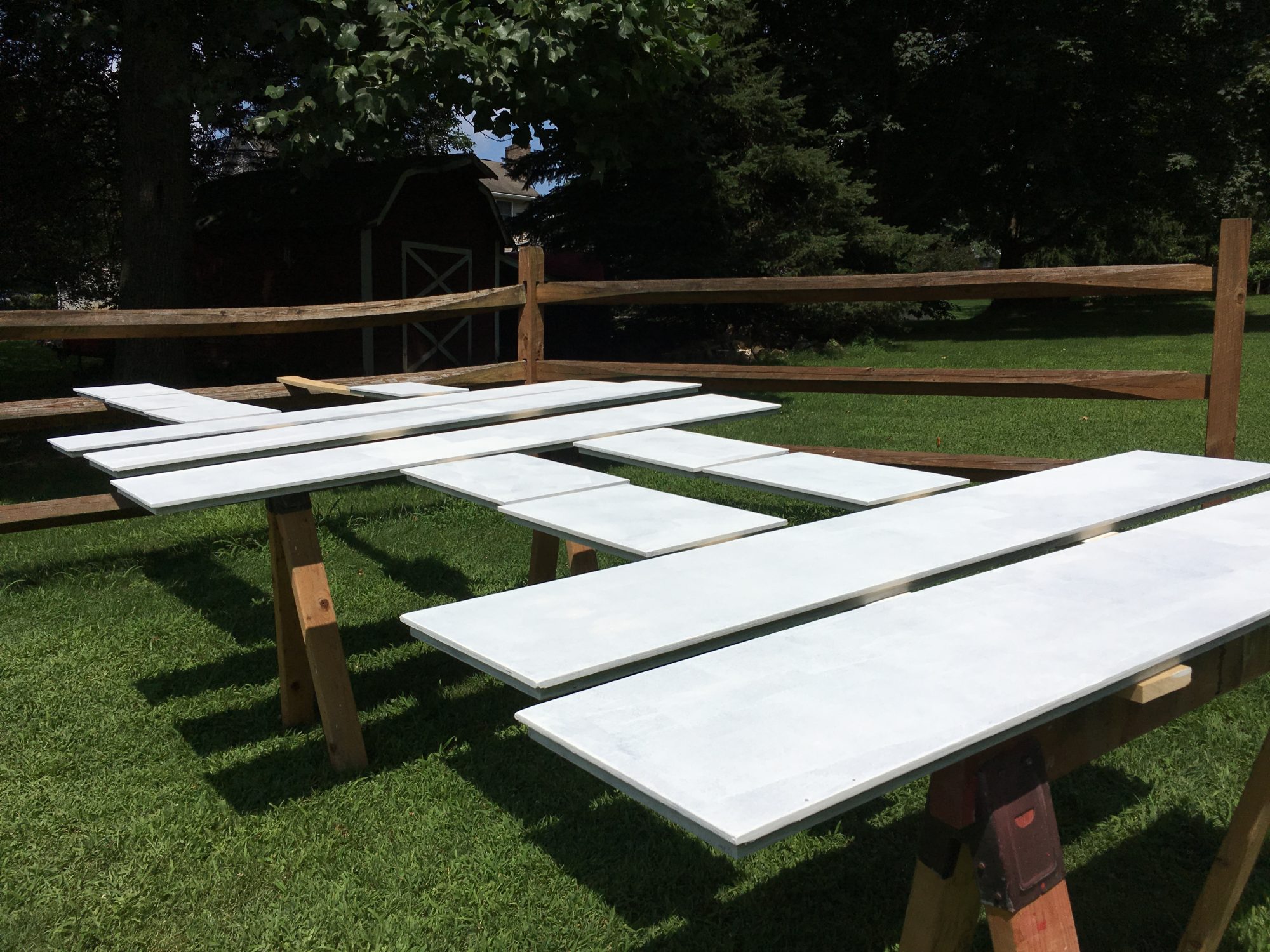 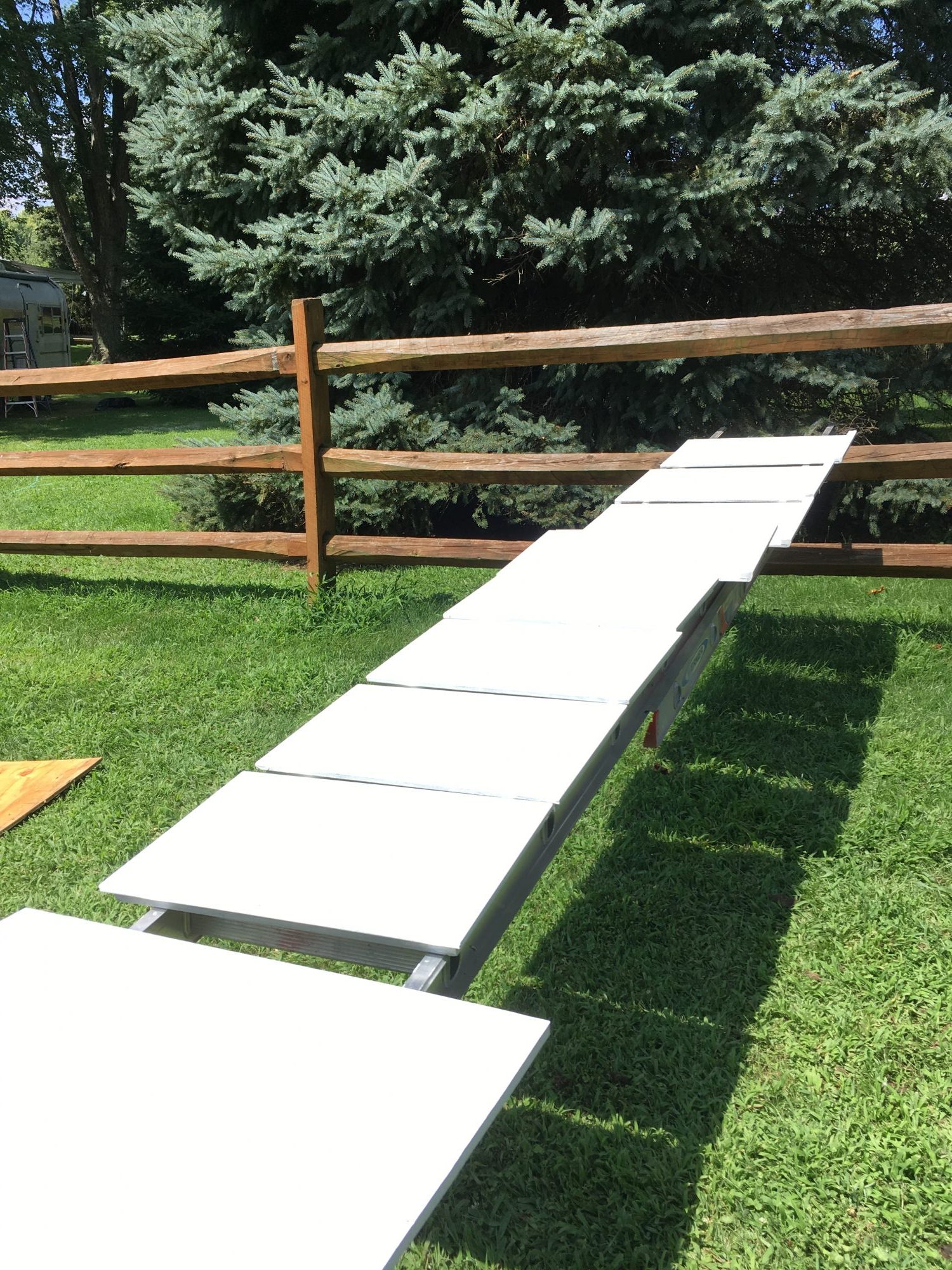 It was a very, very sunny day! I needed sunglasses to paint because the once drab, brown cabinets became a blinding white. 😉

We are really pleased with how the paint job turned out. So let’s compare before and afters! If you want to see the full walk-through of the camper when we first brought her home, check out our YouTube video too:

And here’s the after: 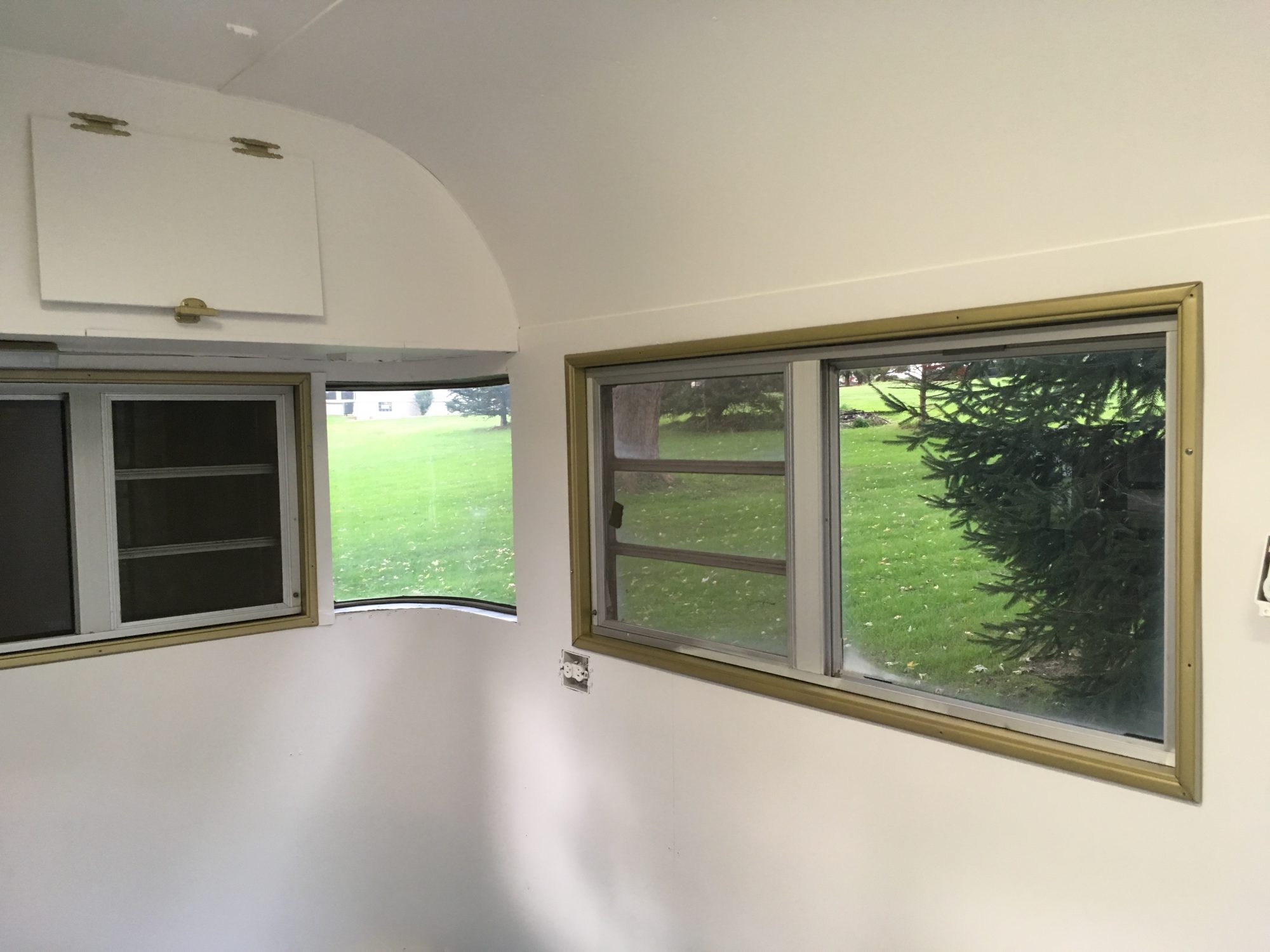 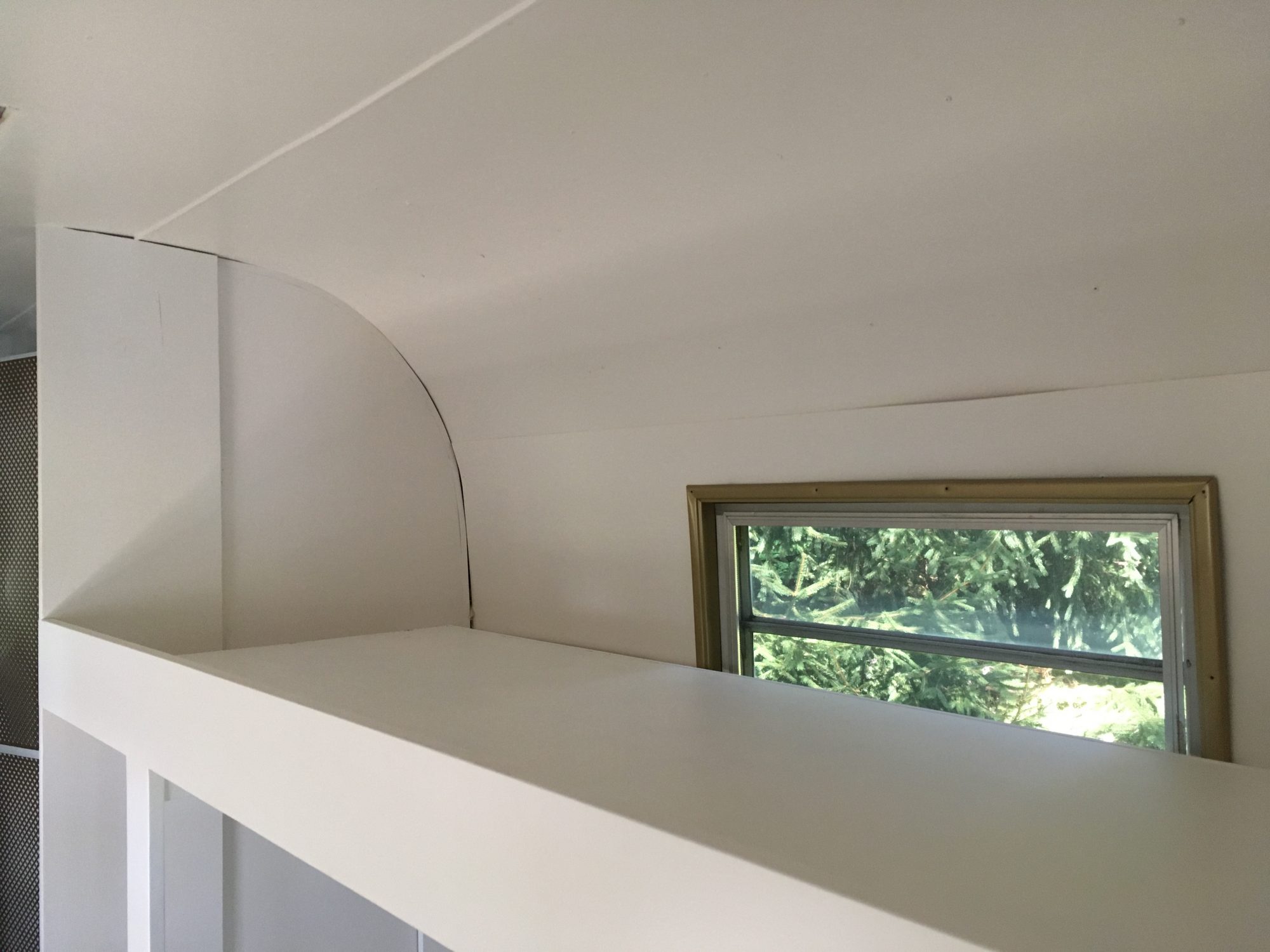 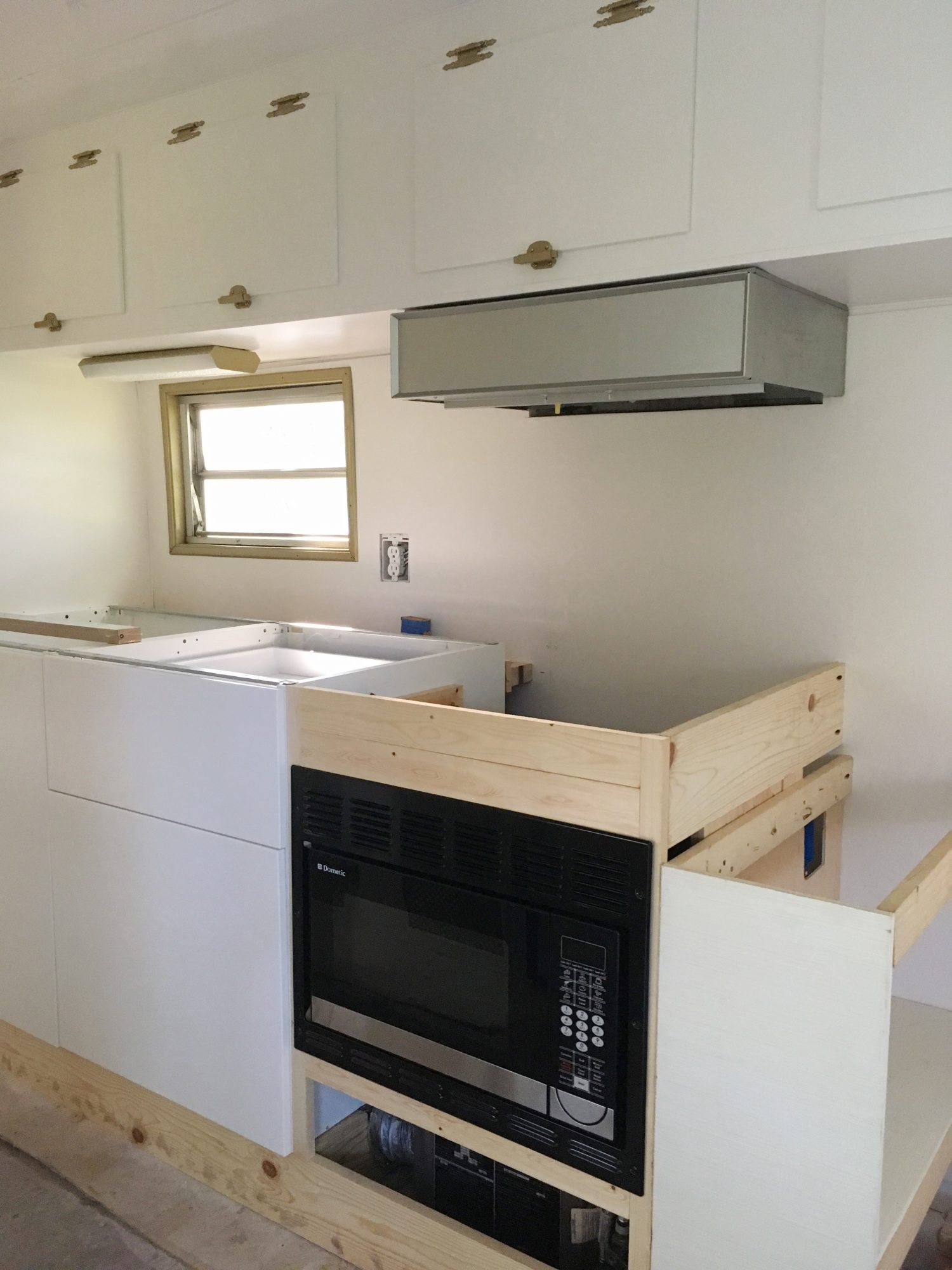 Since we were essentially painting everything in the camper–cabinets, walls, ceilings–and we had a lot of area to cover, it made sense for us to use a paint sprayer. There are a lot of advantages to using the sprayer, but there are also some downsides compared to traditional brush and roller:

Pros to using a paint sprayer:

It’s a lot faster than hand rolling or brushing.

It gives a really beautiful finish coat (as long as you don’t have drips!)

You don’t have to edge anything in, because the sprayer can reach spots that rollers would miss.

Cons to using a paint sprayer:

We ended up using a Harbor Freight 20 percent-off coupon and buying the store’s version of an airless paint sprayer. But it was still a hefty investment.

It is hard to keep a consistent spray-stroke in tight or narrow spaces–something most campers have a lot of!

Whenever Jarrett got to a tight corner or area of the camper, he had to be careful not to stay in one spot too long or else he’d put too much paint on and we’d end up with drips. And sanding out and repainting drips is NO FUN AT ALL. Not to mention time consuming. 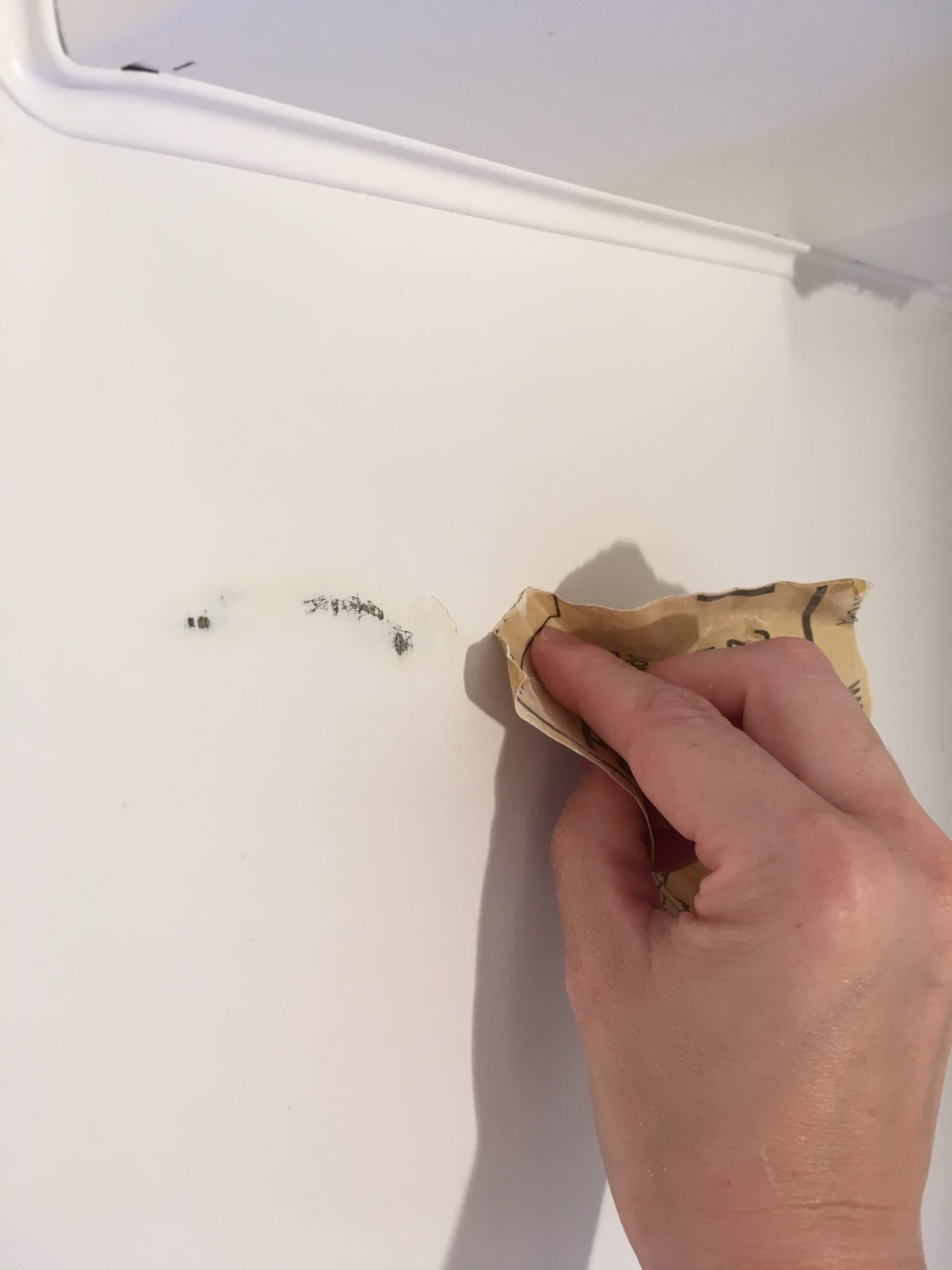 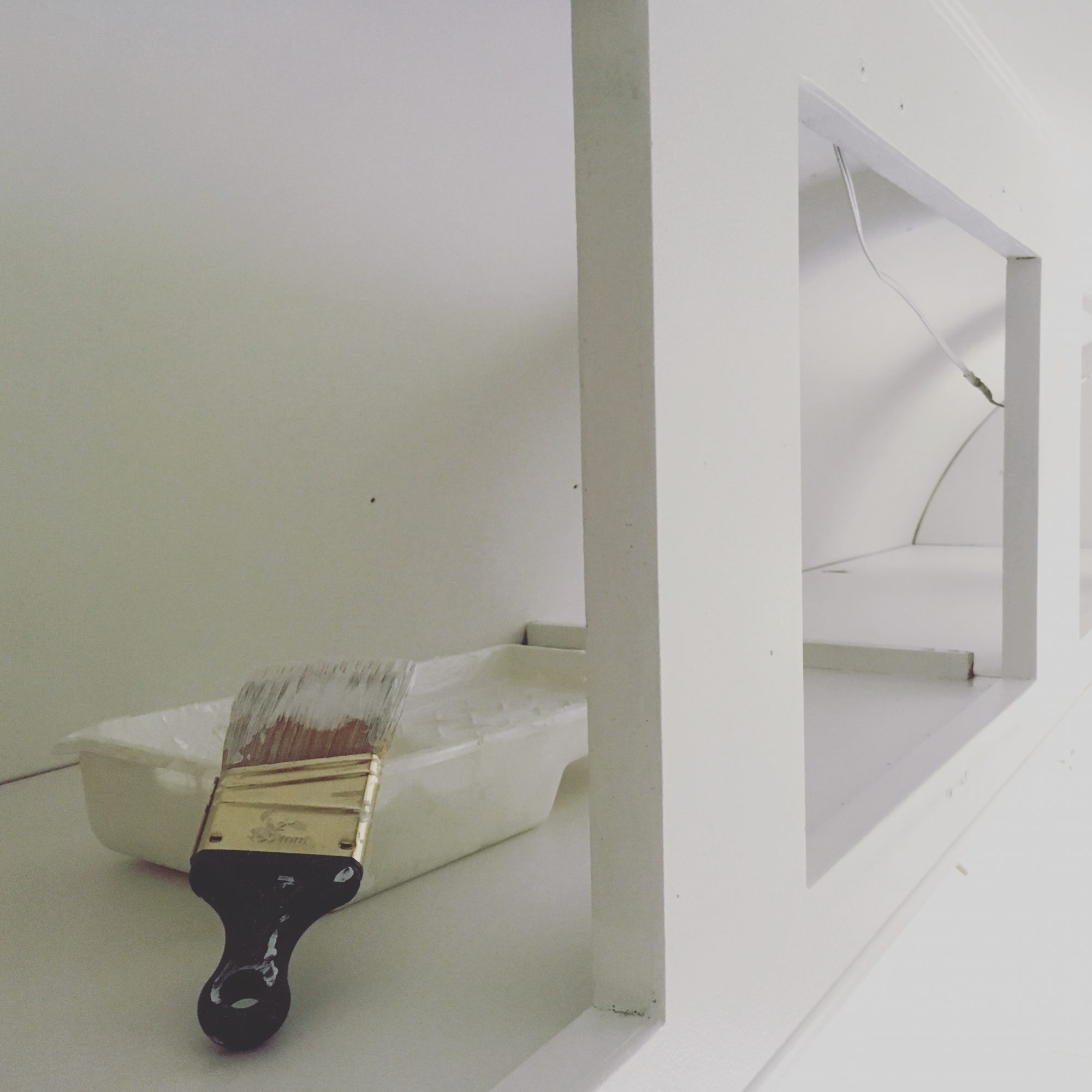 So that’s our camper painting story. Next up … finishing the kitchen nook area so the floor install can begin.

For many families making their rounds of the Utah 5 National Parks, a visit to Bryce Canyon is a highly anticipated stop. With its sweeping vistas and spectacular hikes, Bryce offers something for everyone. But with most of the camping options concentrated immediately around Bryce, families that want to escape the crowds and explore Bryce END_OF_DOCUMENT_TOKEN_TO_BE_REPLACED

For many families planning a trip to the Utah region, their itineraries often center on hitting the high points of iconic stops like Grand Canyon, Zion, Bryce, and Arches. Several lesser-known parks are also worth the stop, though, and for families looking for ways to escape the crowds, Cedar Breaks National Monument should be on END_OF_DOCUMENT_TOKEN_TO_BE_REPLACED