Our visit to Crater of Diamonds State Park in Murfreesboro, Ark., was the first Arkansas State Park that we have camped at and we were very impressed with our first experience. We have heard from Touring Camper readers that several other Arkansas state parks are just as nice, so we will have to visit Arkansas again to check out more. In addition to the great campground, Crater of Diamonds boasts the only diamond-producing area in the world where the public can come and search for diamonds–and keep whatever diamonds they find! We spent a day trying to find those elusive little gemstones and while we had a great time we did not have the keen eyes that other park guests have had in the past year. The day before we arrived, a sixth grader found the largest diamond (2.1 carats) of 2016! 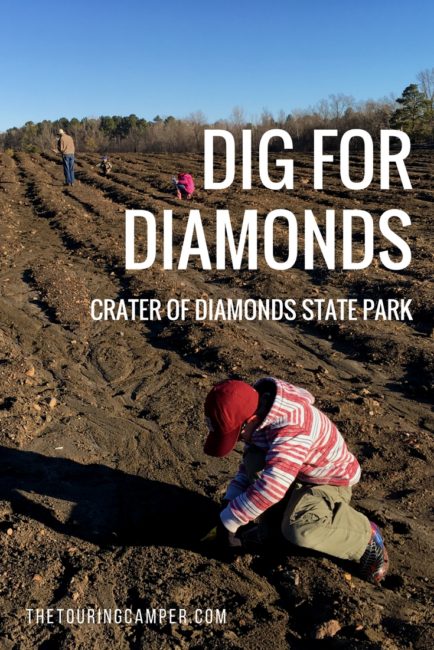 Crater of Diamonds State Park had been on our radar for a few years: We originally planned to visit back in 2015 when we were headed out West with my dad. But when he could no longer go on the trip, we shortened our itinerary and had to eliminate many stops. Ever since then our kiddos have been begging to go look for diamonds. When we learned that we were headed to Texas, we knew at stop in Murfreesboro was in order.

If all Arkansas Sate Parks are as nice as Crater of Diamonds, then this park system may just be be one of the best kept secrets in the South. Even though it was winter and the staff had about half of the campground “closed for winter” there were still a fair number of folks camping, from tents all the way up to a 43-foot diesel pusher. Most of the sites were fairly level asphalt (ours had a lot of slope front to back) with full hook ups. While the sites are not tremendously far apart (~20-30 feet) many have a decent amount of privacy vegetation or were designed so you are not looking directly at your neighbors camper.

Although many Arkansas State Parks use an online reservation system, Crater of Diamonds does not and you must call the park office to make the reservations. When I did so, the staff was extremely helpful picking and reserving a site. Although our site was not my favorite site in the campground, I really did not see a “bad” site.

Since all the sites have full hook up, the bathrooms were not heavily used. In summer months when more tent campers are in the park I would imagine the two bathhouses would see a fair amount of use. The bathrooms were in good shape, although they appeared older.

We were very impressed with the number of amenities this relatively small state park had to offer. The visitor center, which is near the diamond crater area, has a full gift shop, water park (closed in the winter months), picnic area, and interpretative center. The campground had a 1/2 mile PAVED walking trail that went from the campground to the Little Missouri River. Along the path there was a series of interpretive signs and fitness stations. Other features included a small playground in the campground and a very nice laundry room. The campground also had wi-fi hubs on the bathroom buildings. As long as we were near the bathrooms we could connect, but it was too far to connect at our campsite.

The main attraction for this park is the diamond crater where the public can dig for diamonds. While the park does not have an entry fee, there is a fee to go out onto the diamond field (at the time of our visit $8 for adults, $5 for ages 6-12, and free for 5 and under). (Looks like the rates have increased a bit for 2017.) There are additional fees for equipment rental, so our suggestion is to bring a few sand toys (shovel, rake, and bucket) for the kids and you will be good to go. (Garden tools would also work for the adults!) If you decide you want to do screening, then you could rent those from the park for a small fee. We suggest wearing old clothes as you will most likely be sitting on the ground in the dirt (see pictures). Additionally, there is a very wet part of the field where, after a good rainstorm, the mud is thick and slimy (clay based soil). We were very glad that we had packed the kiddos mud boots!

Since it was predicted to rain on our second day visiting the park, looking for diamonds didn’t seem like much fun, so instead we drove about 75 minutes north to Hot Springs National Park. We were very glad we did as it was an incredibly educational and interesting stop. We did not realize that the Hot Springs site was the first federally protected natural resource (set aside in 1832, 40 years before Yellowstone in 1872)! When the National Park Service was founded in 1916 Hot Springs was managed as a unit of Yellowstone until 1921 when it was formed into its own park.

At Hot Springs you can tour the historic Fordyce Bathhouse along Bathhouse Row and visit the National Park gift shop in another of the historic buildings, the Lamar Bathhouse. (You can even experience one of the famed baths by visiting the Buckstaff Bathhouse or the Quapaw Baths and Spa.) Be sure to bring some kind of water jug or water bottles because there is a spigot where you can fill them up with fresh spring water. If you have time, take a stroll along the Grand Promenade or visit the Hot Springs Mountain Tower.

For many families making their rounds of the Utah 5 National Parks, a visit to Bryce Canyon is a highly anticipated stop. With its sweeping vistas and spectacular hikes, Bryce offers something for everyone. But with most of the camping options concentrated immediately around Bryce, families that want to escape the crowds and explore Bryce END_OF_DOCUMENT_TOKEN_TO_BE_REPLACED

For many families planning a trip to the Utah region, their itineraries often center on hitting the high points of iconic stops like Grand Canyon, Zion, Bryce, and Arches. Several lesser-known parks are also worth the stop, though, and for families looking for ways to escape the crowds, Cedar Breaks National Monument should be on END_OF_DOCUMENT_TOKEN_TO_BE_REPLACED