Our Keystone Passport features a great four-person bunk house at the rear of the unit. And although our kids actually look forward to hitting the sack in their own bunk, we had found it was sometimes hard for the kiddos to unwind after a fun day of camping and touring, especially when they were in such close proximity and could whisper back and forth and play flashlight tag. Since we are going to be spending a considerable amount of time in our camper for our West trip, I knew I was going to have to come up with some kind of curtain for each bunk so that the kiddos could be tucked into bed and then partitioned off from the others so they could fall asleep quicker–or at least that’s my hope. 🙂 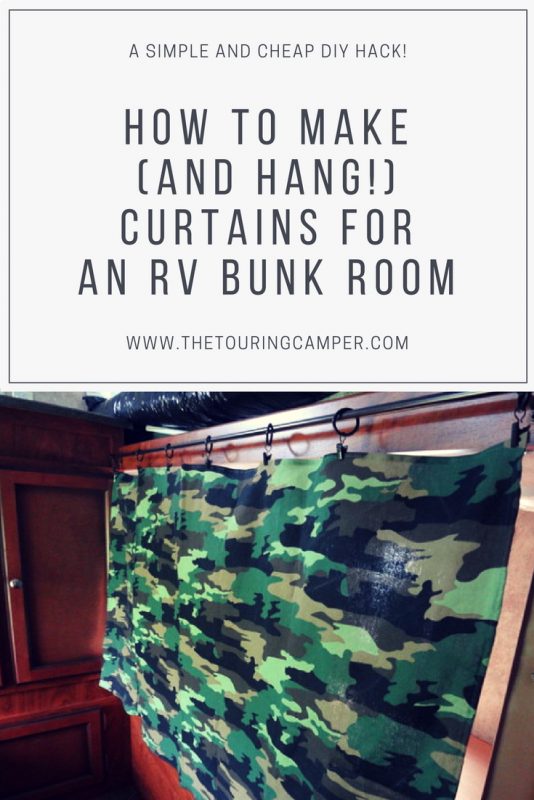 So for our camper bunk curtain project Sweet Pea and I made a trip over to Hobby Lobby and picked up some fabric. My one requirement was that the fabric had to be a dark color since I wasn’t going to take the time to line these bunk curtains. So for Sweet Pea we have Eiffel Towers and the boys are going to be loving some camo. 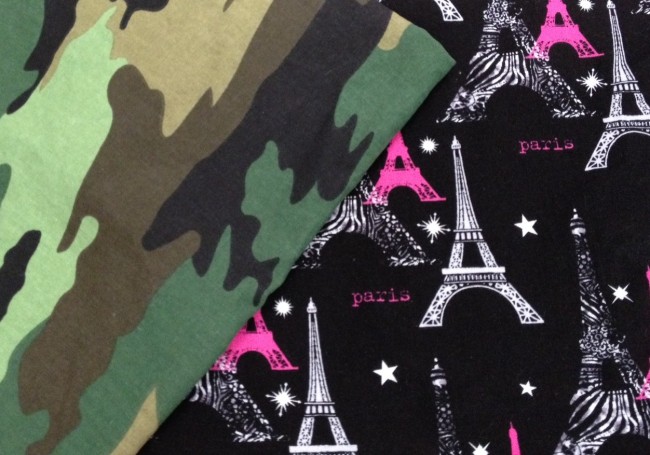 I had to measure the length and width of each bunk where I wanted the curtain to hang. Then it was just a matter of cutting the fabric to size (allowing for seam allowances on each side). I am not a seamstress like my amazingly talented mom, but I know enough to get the job done. So for projects like these, I fold the fabric over to create a 1/4-inch hem, then I fold the edge over 1/4 inch again so that all the raw edges are nicely hidden. If you are new to sewing there are many wonderful tutorials on YouTube–I am not the best person to teach you! 🙂

For the next part Jarrett had to hang curtain hardware in the bunk house area. For the lower bunk this was just a matter of picking up an inexpensive cafe curtain rod at Walmart and screwing the brackets for either end into the wood support of the top bunk. Then I slipped on some curtain clips before positioning the rod and attaching the camo curtain to the clips. I had thought about doing pocket curtains so that I wouldn’t have the extra expense of the curtain clips, but I think the clips will make it easier for us to slide the curtain out of the way when not in use: 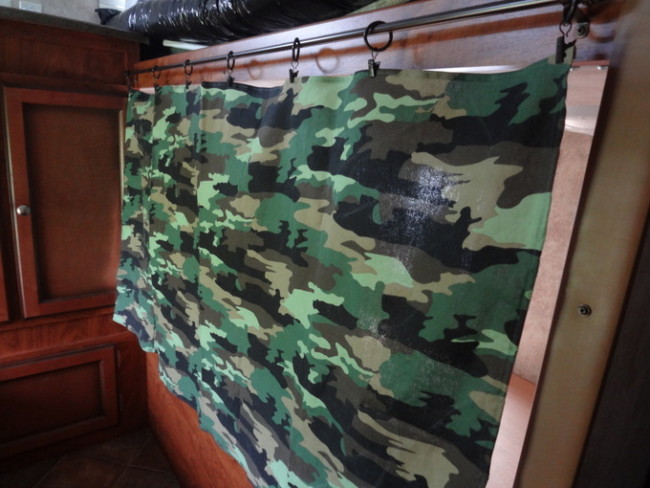 For the top bunks we had to get a bit more creative since the span was longer and the only spot to hang a curtain rod was either on the ceiling or on the walls capping the bunks. We happened to have an Ikea Dignitet kit and we realized that at 197″ in length, we had enough line to go from the start of one bunk end all the way around to the end of the other bunk end–essentially in a giant “U.” 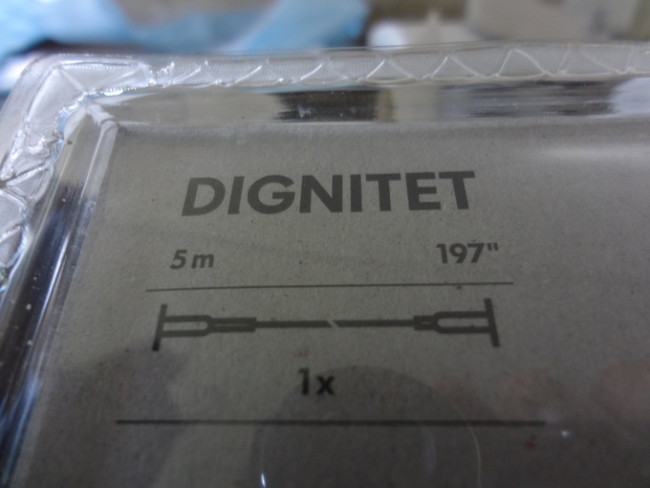 The Dignitet kit offers a lot of flexibility for where you can hang it, especially if you are covering a long area. Jarrett chose to screw the anchor points into the ceiling since it seemed like it was going to stick out too far if he had attached them to the wall instead: 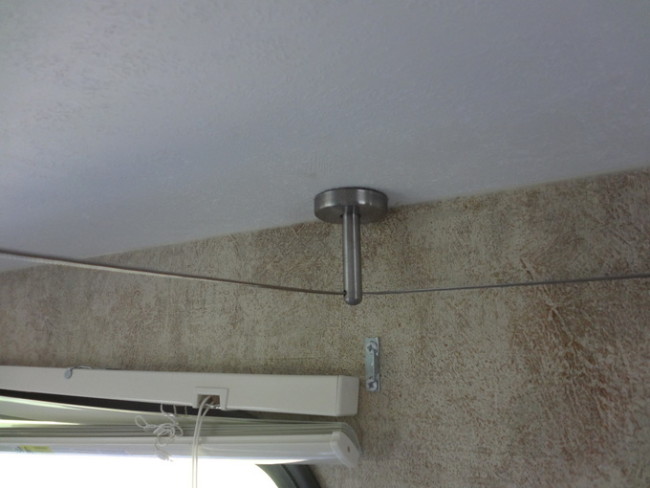 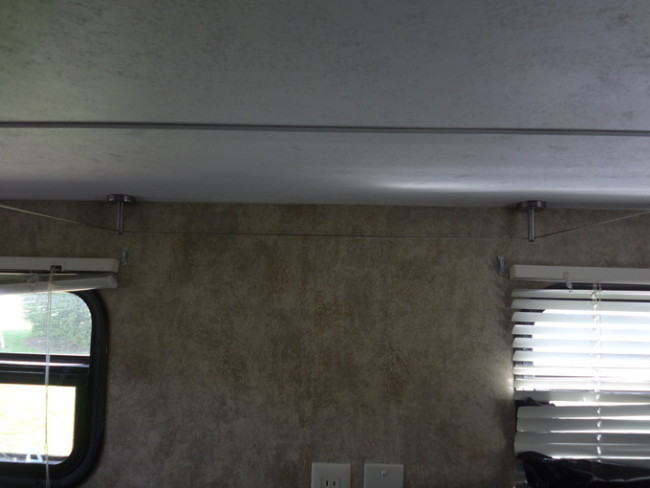 Then with the curtain clips slid on (which you have to do before you finalize the anchor points), it was just a simple matter of clipping the fabric onto the clips. 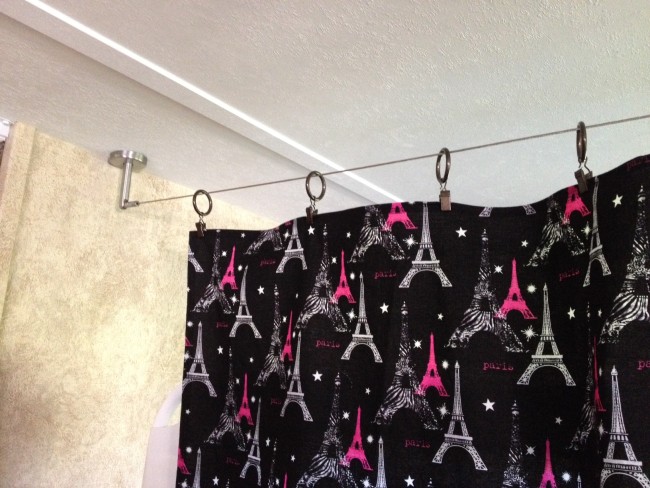 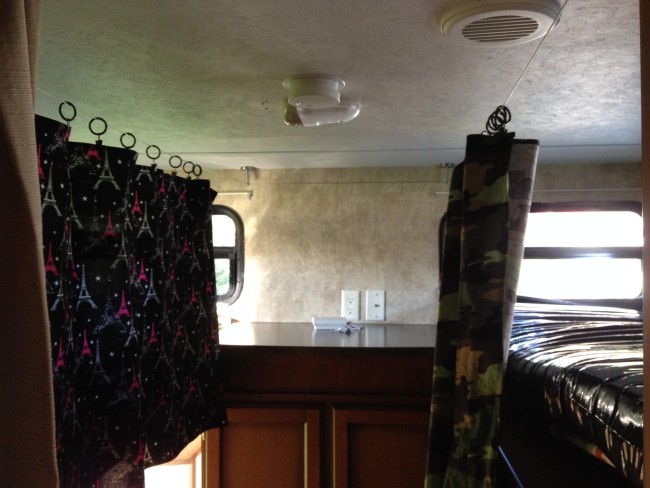 So that’s how we solved that problem. I love Ikea!

You may notice in some of the pictures we still had factory blinds on the bunk windows, but then in the last few pictures they are no longer there. That’s because we were working to replace the blinds with some DIY curtains. For details on our super simple and budget-friendly camper window curtains, head over here.

The content of TheTouringCamper.com is intended for entertainment and information use only and is not to be construed as providing professional advice. Extra precautions, additional expert input, and additional research are always advised.

For many families making their rounds of the Utah 5 National Parks, a visit to Bryce Canyon is a highly anticipated stop. With its sweeping vistas and spectacular hikes, Bryce offers something for everyone. But with most of the camping options concentrated immediately around Bryce, families that want to escape the crowds and explore Bryce END_OF_DOCUMENT_TOKEN_TO_BE_REPLACED

For many families planning a trip to the Utah region, their itineraries often center on hitting the high points of iconic stops like Grand Canyon, Zion, Bryce, and Arches. Several lesser-known parks are also worth the stop, though, and for families looking for ways to escape the crowds, Cedar Breaks National Monument should be on END_OF_DOCUMENT_TOKEN_TO_BE_REPLACED