Malaquite Campground at Padre Island National Seashore is an AMAZING place to camp … if you are prepared with the right equipment. This was our first attempt at boondocking (see our earlier post here) and while we thought we were prepared, we were not! Ha! 🙂 However, this awesome campground now has Kristin and I plotting what changes we can make so that we can take advantage of more amazing camping opportunities like Padre Island National Seashore. 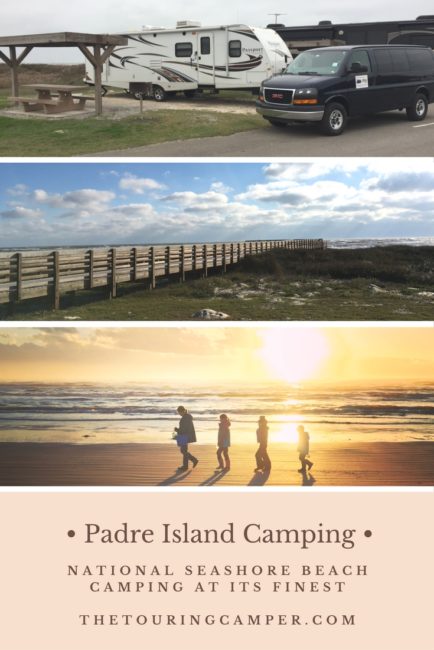 Campground: The campground was nearly full while we were there–even though it was January and the real-feel temperature dipped into the teens! Since the campground is first come, first serve, we would suggest having a back-up plan in case all of the sites are full. That back-up plan could be beach camping, since at this national seashore you can obtain a permit to tow or drive your camper out on the beach and set up most anywhere you like! If only we didn’t have a two-wheel drive van that gets stuck in wet grass. Boo!

The campground itself is very basic with two rows: ocean side and dune side. The ocean side sites back up to the ocean and provide wonderful views and a small shade pavilion–and in the hot Texas summers the wind coming off the ocean would be refreshing. (The “breeze” was just plain freezing while we were there!) The dune side only has fully-asphalted sites (which we think would be rather hot in the summer) and no shade pavilion. Although you can see the ocean, you will be looking at it through other campers.

Generators are permitted and I think we were the only folks without one–that should have been a clue to our epic boondocking fail! Typically the rules say generators cannot be run during night-time quiet hours, but due to the extreme cold during our stay that was not enforced … it’s not like anyone was sitting outside, nor could you really hear them over the howling wind!

Bathrooms: While the bathrooms were clean they are spartan. There is no hot water or electricity and they were quite chilly, thus not many folks were using them during our visit. (The water lines actually froze over night while we were there.)

Amenities: It’s a national seashore so there is not much to report here, but the park itself has some amazing opportunities including:

During our short stay, the kids completed the Junior Ranger program and helped with beach clean-up by picking up trash that had washed ashore. Due to the temperatures we did not get to spend a lot of time on the beach soaking up the sun, but we did bundle up in winter coats and mittens to look for seashells. 🙂

Since it was so cold and we were not prepared for boondocking (and thus our visit was cut short) we did not do any other touring from this campground. Watch for our upcoming review of Mustang Island State Park for things we visited in the area.

Cost: $8 per night; there is also a park entrance fee but since Sweet Pea is a 4th grader we used the special “4th grader in the park pass” to get in.

For many families making their rounds of the Utah 5 National Parks, a visit to Bryce Canyon is a highly anticipated stop. With its sweeping vistas and spectacular hikes, Bryce offers something for everyone. But with most of the camping options concentrated immediately around Bryce, families that want to escape the crowds and explore Bryce END_OF_DOCUMENT_TOKEN_TO_BE_REPLACED

For many families planning a trip to the Utah region, their itineraries often center on hitting the high points of iconic stops like Grand Canyon, Zion, Bryce, and Arches. Several lesser-known parks are also worth the stop, though, and for families looking for ways to escape the crowds, Cedar Breaks National Monument should be on END_OF_DOCUMENT_TOKEN_TO_BE_REPLACED