As we plotted our winter adventure to Texas, the one thing we repeatedly heard and read is that a trip to Texas must include at least some time spent in the Hill Country. Guadalupe River State Park in Spring Branch provided the perfect spot to do some Texas Hill Country camping while exploring the big city (i.e., San Antonio) and passing through hamlets like Luckenbach. We spent four days in the Texas Hill Country–which really isn’t enough!–and packed them full of lots of amazing touring. 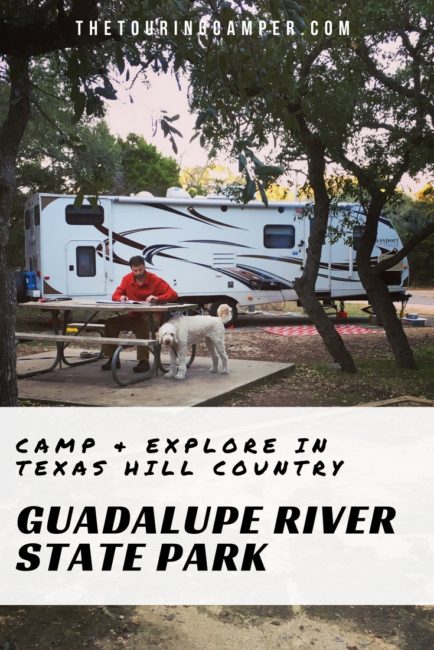 Campground: Guadalupe River State Park is located three miles north of Texas Rt 46 on State Park Road P31. Once you enter the state park you will travel another mile to reach the two campground loops. The Cedar Sage Camping Area to the west (sites 1-37) are all very short sites–the longest site is around 20 feet. The Turkey Sink Camping Area to the east of the main road (sites 38-85) has longer sites, but I would estimate that the longest sites were not much more than 40 feet long. Although there were several large fifth wheels and one motorhome in the campground, they were rather tight on their site pads. There were also a number of trees near some site pads–which would provide awesome shade in the summer but could encroach on camper slide-outs.

The camp sites were all very private and had a good amount of space between them. All of them also had nice tent platforms, fire rings, and picnic tables (which are anchored on a concrete pad and can not be moved). One interesting thing we discovered is that while there are no “official” full hook-up sites we did notice that sites 81, 82, and 84 have a sewer line pipe on site. Perhaps they were once campground host sites?

The bathrooms were clean (albeit a bit mildewy in places) and functional but older, much like McKinney Falls State Park. There was WiFi at the bathhouse.

In addition to a great campground, the main attraction of Guadalupe State Park is the river. We were told that during hot Texas summers there is a steady stream of canoes, kayaks, and tubes floating down the river, especially on the weekends. The park also offers environmental education programs and numerous hiking trails. The park’s guidebook highlights how each of the trails take you through different habitats in the Texas Hill Country.

We spent three days touring the Texas Hill Country and it seemed that around each new bend we found more and more treasures to investigate on a return trip to Texas–places like Luckenbach where you can put on your dancing shoes and catch a live music show, or Fredericksburg where German heritage combines with Texas hospitality. And of course there is the food: Texas is home to lots of great BBQ, like Buzzie’s Bar-B-Q in Kerrville, which featured some pretty awesome brisket. 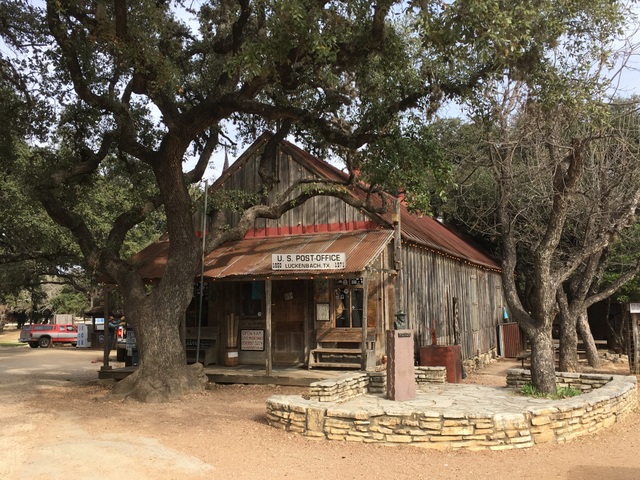 For an exhilarating high and unique rock climbing experience, consider exploring Enchanted Rock State Park just outside of Fredericksburg. The Summit Hike is not for the faint of heart, however, and if you don’t like heights (like Kristin) you might want to stick to the lower Loop Trail. (Pets are not allowed on the Summit Trail, but are permitted along the Loop Trail.) At the top of this giant pink granite dome the kiddos were fascinated with the brine shrimp pools and I loved the sweeping views in every direction. Going up was not so bad … it was actually the trip back down that was a bit more nerve racking (see pictures). It is quite steep!

During peak season, the park will at times close for a few hours until the parking lot empties out. If you are visiting during the summer months or on a weekend, consider going early in the day. The park puts closure updates on its Twitter and Facebook page, and flashing signs on the approach roads will also alert you if the park is closed.

Additionally, there is a $7 entrance fee for anyone 13 years of age or older. With the Texas State Parks pass you can get in for free.

When we made plans to visit the Lyndon B. Johnson National Historic Park in Johnson City, at first we were going to skip a stop at Johnson’s boyhood home. At the last minute we decided to take the (free) boyhood home tour, and it turned out to be a great decision. It set the stage for the rest of our visit to the Johnson Ranch by providing some great historical background. The two home sites are located about 15 miles apart, so you can easily visit both locations in one day.

After we left the boyhood home site, we headed to the LBJ State Park and Historic Site Visitor Center where you have to obtain a free driving permit in order to get onto the LBJ Ranch property. 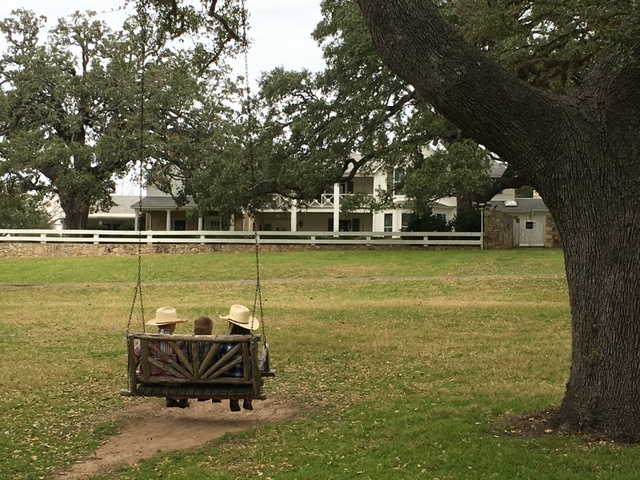 After the death of Lady Bird Johnson in 2007, the NPS began offering tours of the first floor of the Johnson Ranch, which was dubbed the Texas White House during Johnson’s presidential term. The tour tickets cost only $3 per adult, and children 17 and under are free. Since Kristin and I love touring historic homes, this was one of the highlights of the trip. The majority of the rooms on the tour were restored to how they would have looked during LBJ’s presidential term. The NPS ranger who gave the tour even kept the kiddos engaged by tasking them with finding the phone in EVERY room of the house (for a grand total of 15 on the first floor). And of course, this NPS site also offered a Junior Ranger program.

We spent a day in San Antonio visiting the Alamo, the San Antonio Missions NPS, and the river walk. For our visit to the Alamo we found public parking in an open air lot about two blocks away (located behind the Alamo)–and since we arrived before 10 a.m. we secured the cheaper $5 parking. There’s a lot of hype surrounding the Alamo because of its rather epic history, so some people find their visit to be a bit of a letdown when they discover it is not very large. But the site is free to tour and it is THE Alamo after all! Would any visit to Texas be complete without at least a stop? 🙂 We probably only spent an hour and a half at the site, but we took time to watch the short film about the Alamo’s history, and this was helpful for explaining its significance to the kiddos. 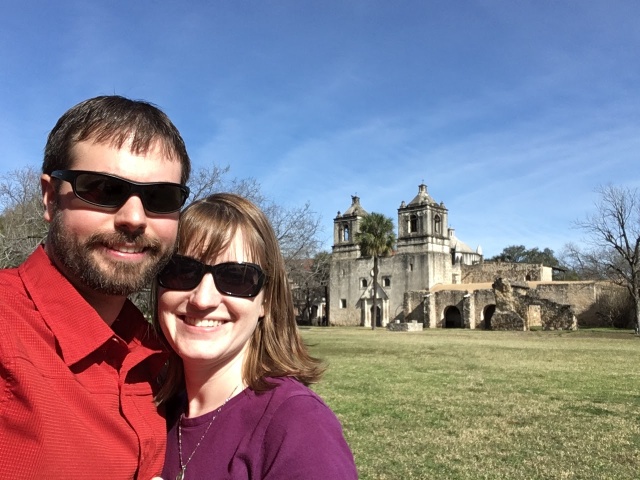 From there we headed over to the National Park Service’s San Antonio Missions site. We did not know much about the history surrounding the four missions located along the San Antonio River, so it was fascinating to learn more about the role the sites played in early Texas history. (And of course the kids worked on another Junior Ranger Badge.) The architecture and layout of each mission site is very different, so if you have time to visit all four sites, it is well worth it. Our personal favorite was probably the smallest, Mission Espada because of its unique architecture and the intimate atmosphere of the chapel.

Before we left San Antonio for the day, we made a quick stop to check out the River Walk–because if you are in San Antonio, it’s the thing to do! Kristin and I have determined, though, that this is one of those stops we’d appreciate (and enjoy) more sans kiddos. The River Walk, with its various hotel and dining options, would be a fun place for a couple’s getaway weekend–but dragging a 9, 7, and 5-year-old through the winding and crowded streets was not our idea of a grand time. So we’ve added that to the “when we return as empty-nesters” list. 😉

Cost of stay: $24 per night, but we did get half price on the second night due to having the Texas State Park Pass; thus it was $84 for four nights.

On the road with special needs kids
Camper Pit Stops

For many families making their rounds of the Utah 5 National Parks, a visit to Bryce Canyon is a highly anticipated stop. With its sweeping vistas and spectacular hikes, Bryce offers something for everyone. But with most of the camping options concentrated immediately around Bryce, families that want to escape the crowds and explore Bryce END_OF_DOCUMENT_TOKEN_TO_BE_REPLACED

For many families planning a trip to the Utah region, their itineraries often center on hitting the high points of iconic stops like Grand Canyon, Zion, Bryce, and Arches. Several lesser-known parks are also worth the stop, though, and for families looking for ways to escape the crowds, Cedar Breaks National Monument should be on END_OF_DOCUMENT_TOKEN_TO_BE_REPLACED