In between getting ready for the holidays and our winter travels, we’ve been using every spare moment to tackle projects in Tilley. We were blessed with some unseasonably warm days in November and early December, and we tried to take advantage of as many as we could before the frigid temperatures were upon us. The latest project was demo day! In the midst of the gut job, we discovered a few surprises (any remodel project wouldn’t be complete without a few!) that slowed us down a bit, but I feel like we are finally making some progress toward rehabbing her into our family’s next camper. 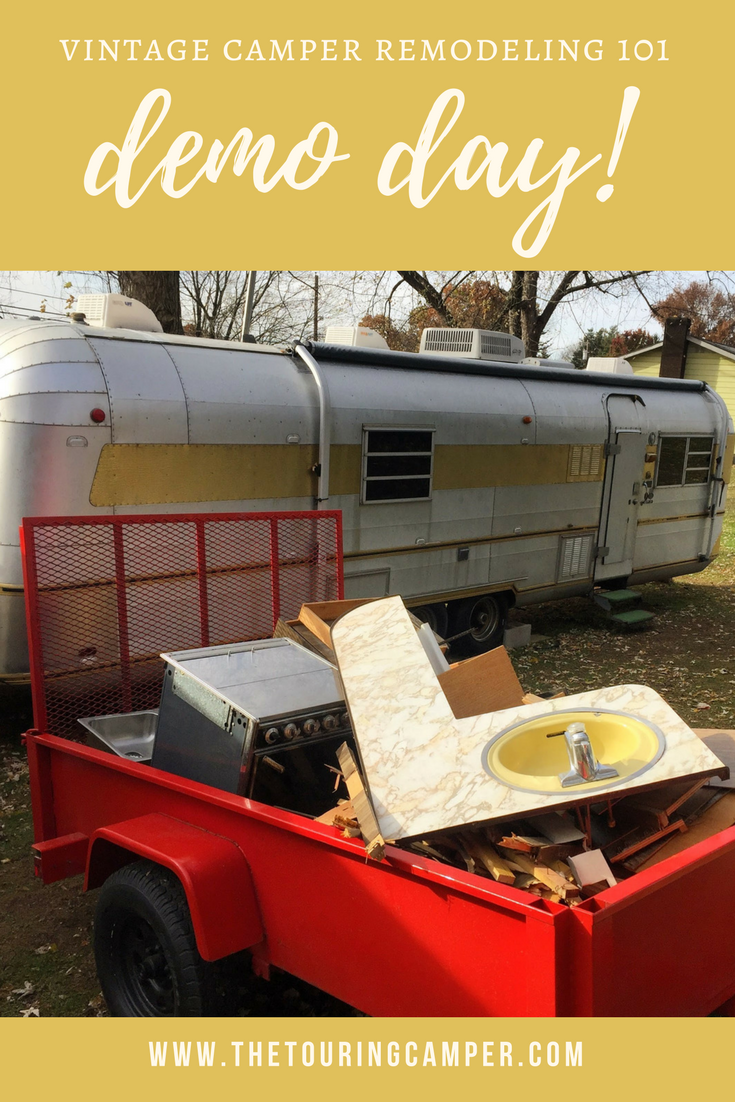 Since bringing Tilley home we’ve had to tackle a roof resealing project and then we needed to test out the holding tanks. Gutting the camper of everything we didn’t want was the next big project. We will not be taking Tilley all the way down to studs, so to speak. We’ve gone back and forth on this quite a bit, and although we may be blissfully naive, here’s a bit of our rationale for why we aren’t redoing everything:

Although demo day wasn’t an entire gut job, I still tore out quite a bit. This is just one load of what was taken out! 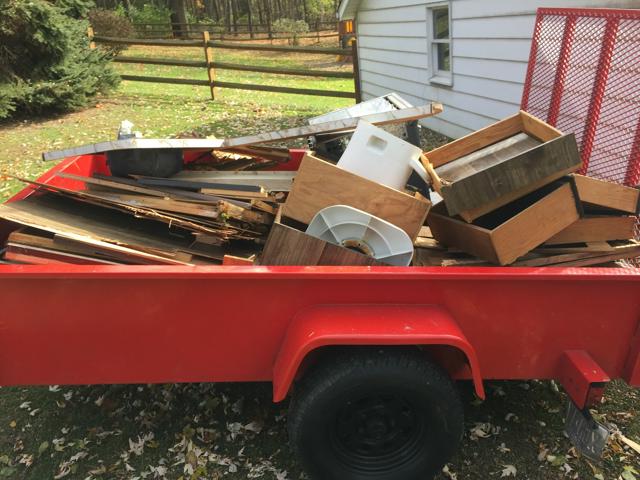 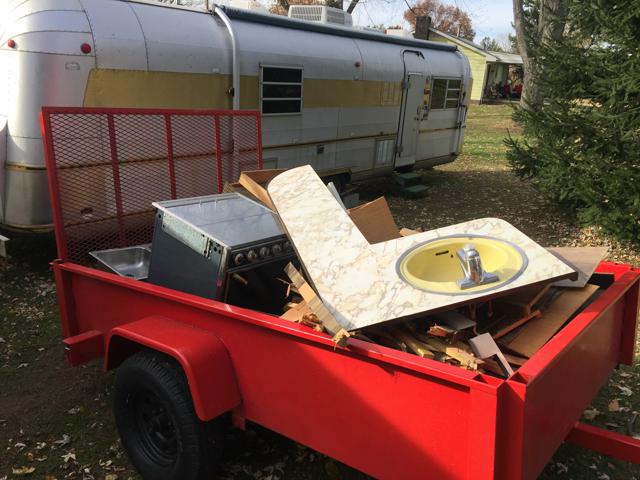 Here’s a tour and time lapse video I put together of demo day in Tilley!

And here are a few pictures of before and after, starting with the kids’ bunk room: 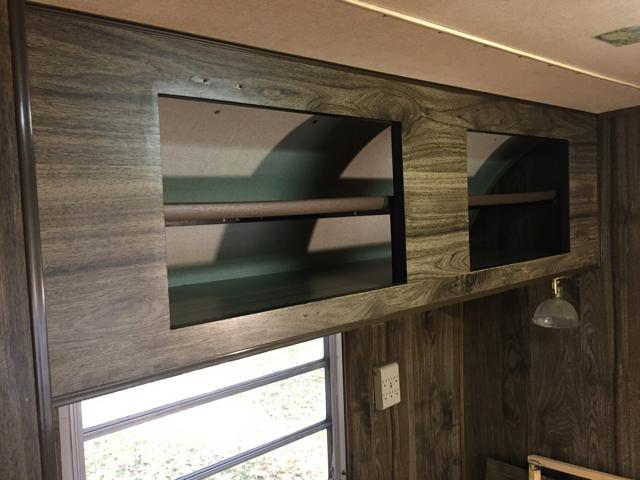 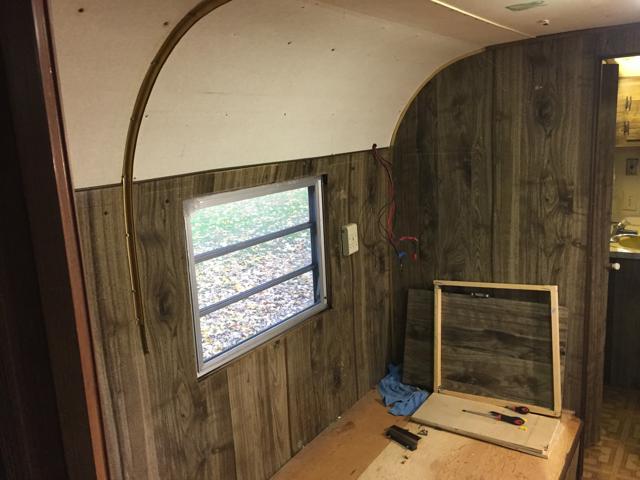 I did save some of the upper cabinets from the left side (where we are adding a bunk) in case we need them for the other side where there will not be a bunk. 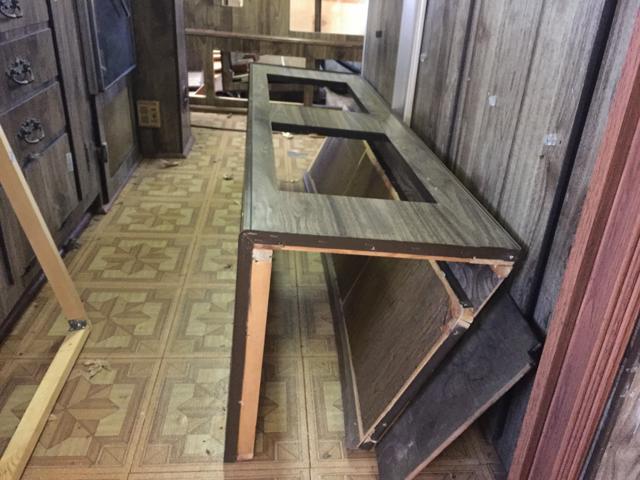 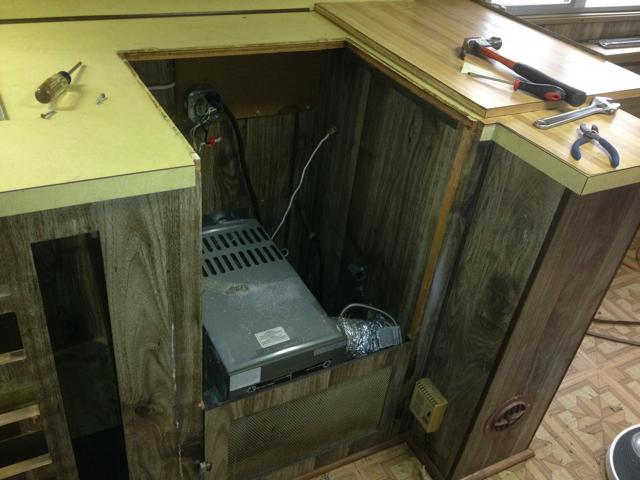 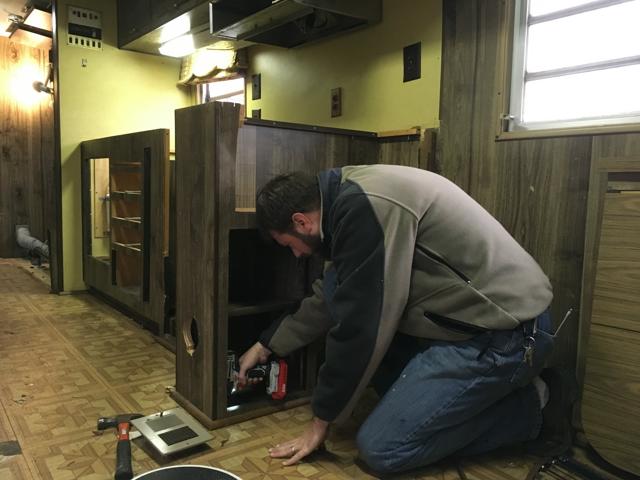 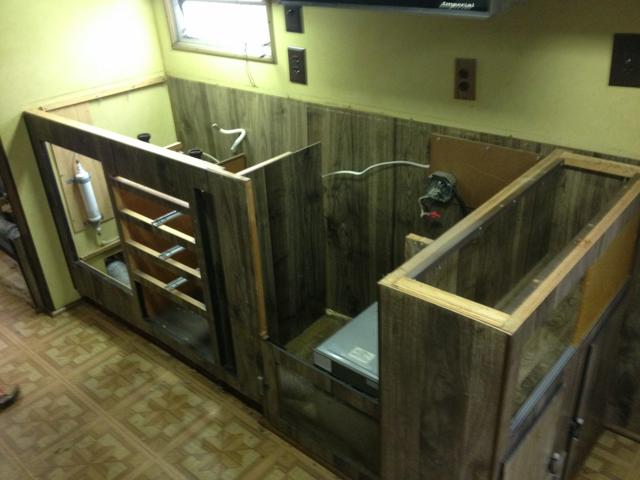 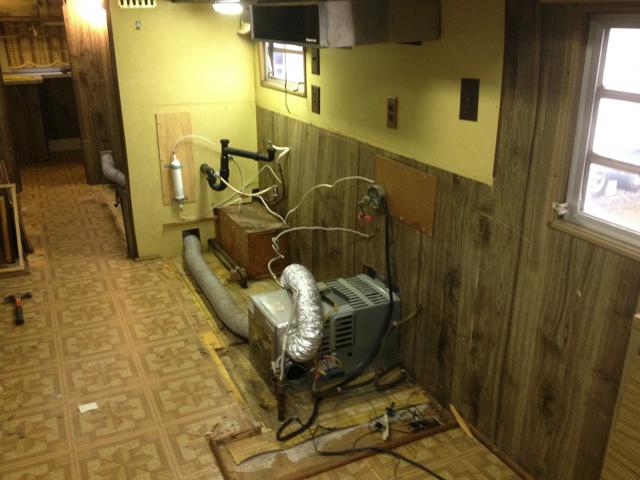 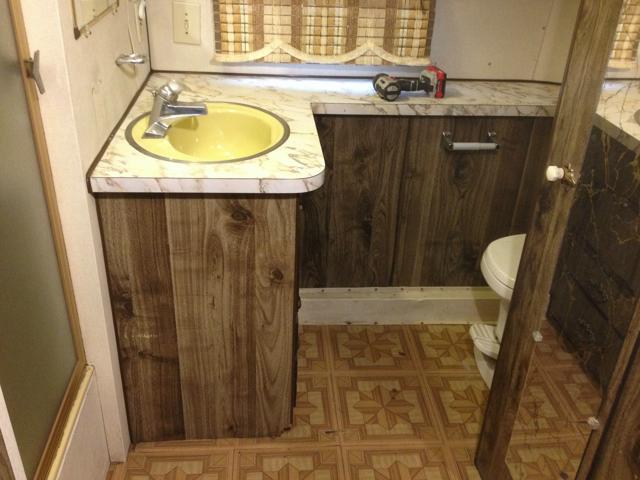 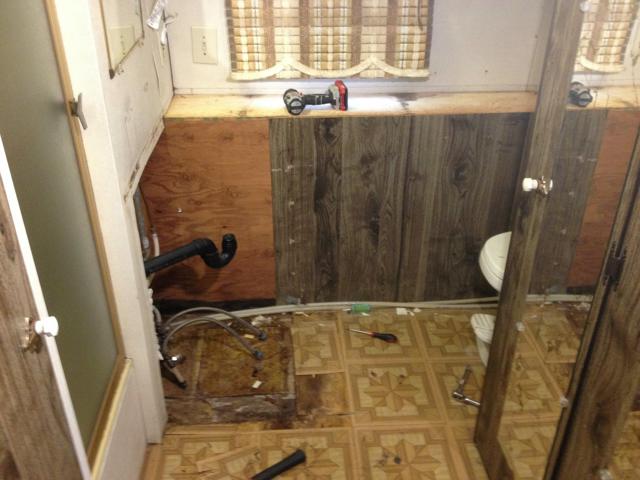 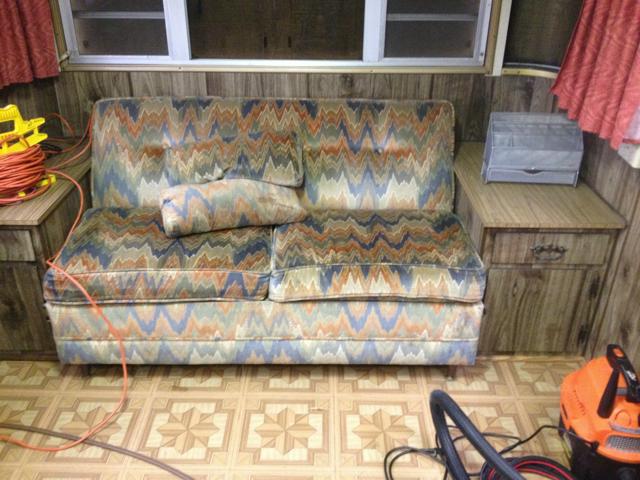 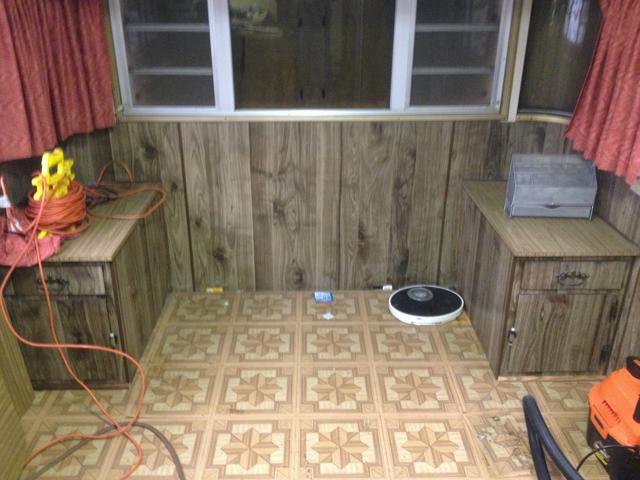 We ended up having to remove the side cabinets as well after we discovered water damage around the right window (more on that below). Then we discovered they had laid a second subfloor when someone put in the “newer” linoleum. So that all had to be ripped up to get down to the original: 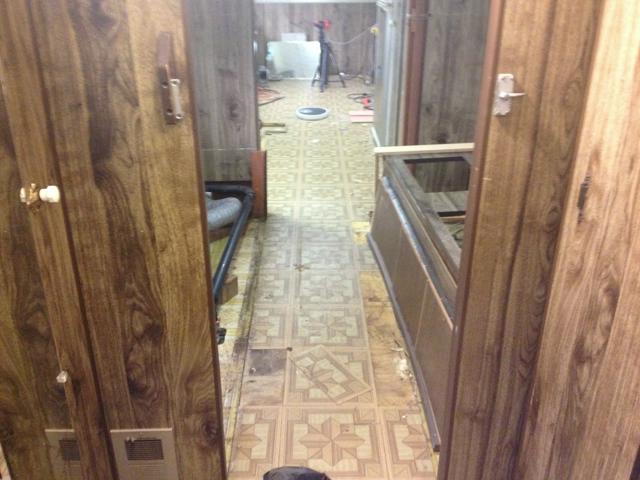 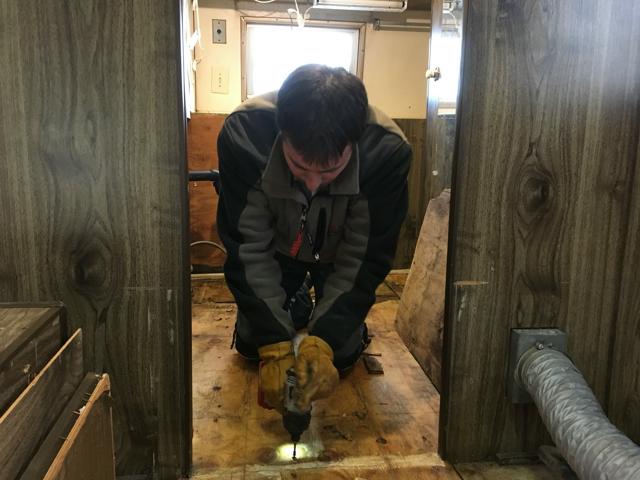 The area by the door is the main problem area that will need to be repaired. A water leak from faulty rubber around the door rotted out this section of the subfloor. The plan is to cut it all out and replace it with new subflooring. 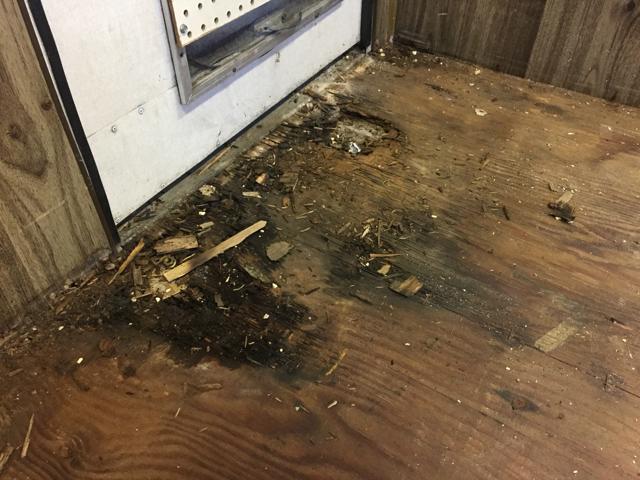 Then we discovered the water leak from the window. This is the face you make when you find an unpleasant surprise: 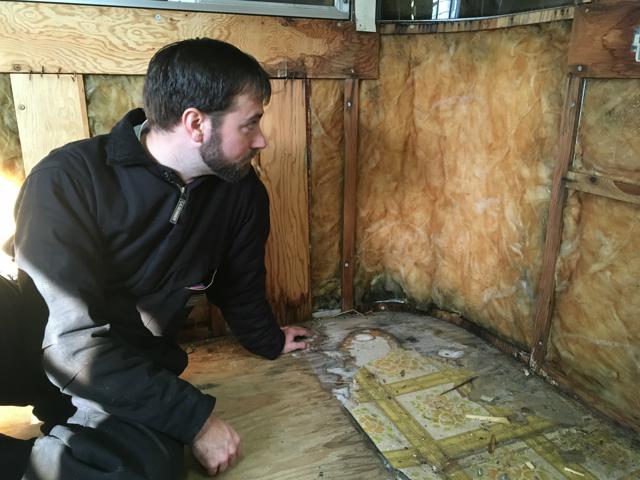 Thankfully the subfloor is still solid, but the insulation and the wood around the windows will have to be replaced after we get the window resealed. (The insulation seems to have been absorbing most of the water, as it stunk to high heaven.) 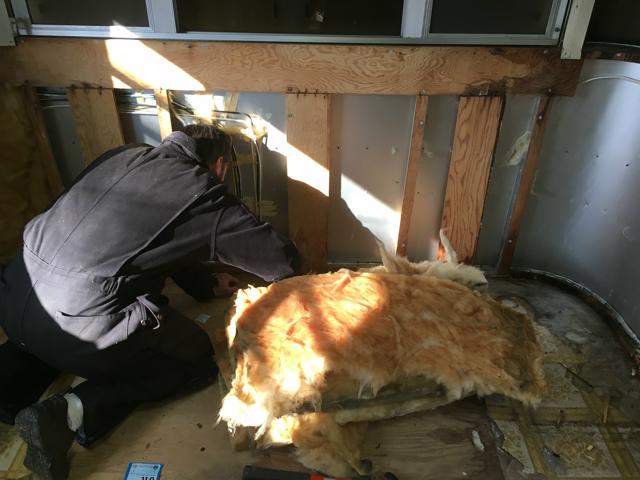 Of course, once the insulation was out we discovered two more (related) issues: 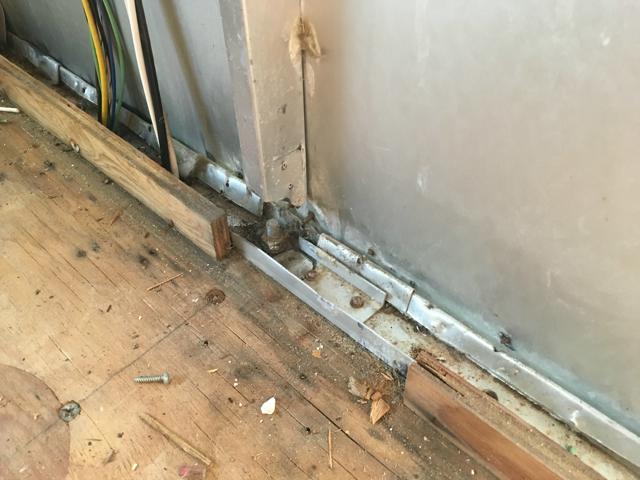 At some point a rib snapped, which led to the outer skin separating from the C-channel. So the screws along a portion of the front weren’t holding anything together–and you could see right outside:

After repairing the snapped rib, I was able to reattach the outer skin using stainless steel screws (so they won’t rust). I forgot to snap a picture of the repair (although you can see the repair in the video above)–when it quits snowing and I’m back in the camper I’ll have to add a picture in.

In the meantime, Kristin apparently thought it would be funny to document the pain and suffering I’m already encountering in this remodel. I had just smacked my head on the upper cabinets–so while I was seeing stars, unbeknownst to me Kristin snapped this. Can you feel the love? 🙂

Amid the window water leak discovery we also determined that water was leaking through the main window’s rock guard latches. Over time the weight had caused the latches to sag forward, which allowed water to slowly seep into the camper wall. We removed the latches and then reattached them with small wood blocks on the inside wall to anchor the latches more securely and prevent any future sagging. Then I added a little bit of LAP sealant around them to make doubly sure water wasn’t getting back in. 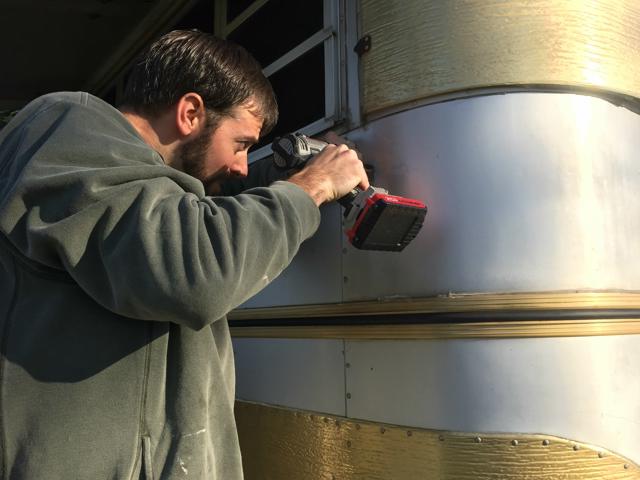 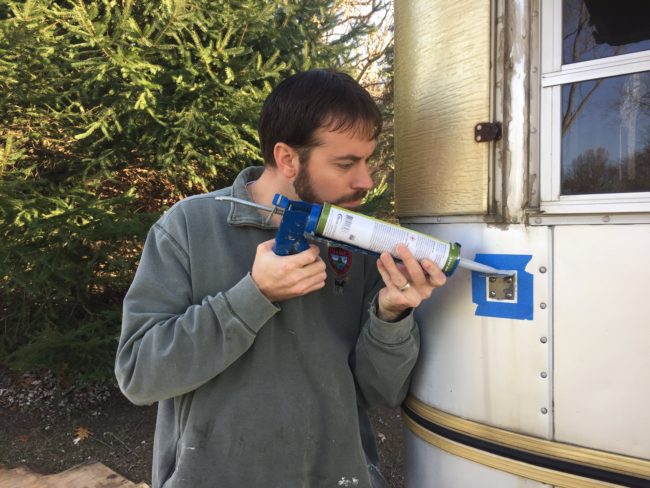 So that’s the latest on Tilley. Next up on my “to-do” list is running all new fresh water lines and adding electric lines for new lighting and new outlets. Just look at what I have to work with currently: 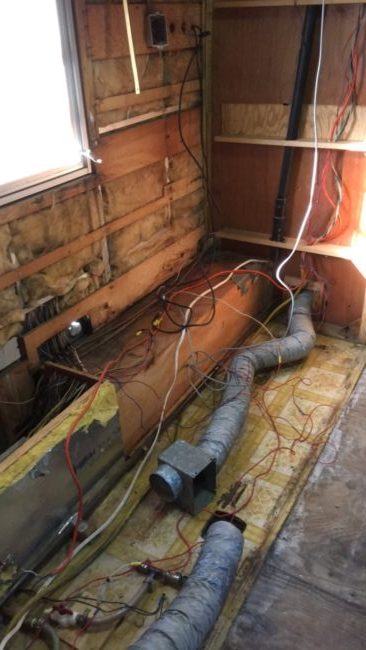 Definitely going to work on cleaning that up a bit–and hopefully figuring out what they all go to!

Exploring the Museum of the Marine Corps

Last summer during our tour of the Washington, D.C. region, a fellow camper gave us a great tip about going to the National Museum of the Marine Corps. We had never heard of it before, but since we had some extra time in our schedule, we decided to go check it out, and we are END_OF_DOCUMENT_TOKEN_TO_BE_REPLACED

Why now is the time to buy an RV

According to AAA, this year’s Covid outbreak led wary Americans to cancel at least 150 million summer vacations. Within the camping industry, many RVers had to scramble to make new plans as campgrounds around the country cancelled reservations. Although most of those locations have since reopened to RVs and tenting families, many campgrounds still cancelled END_OF_DOCUMENT_TOKEN_TO_BE_REPLACED