Over the next several months we will be working to restore and remodel Tilley, our 1976 Silver Streak. Before we can tackle what Kristin calls the “fun” projects–painting and decorating–we need to ensure that her primary systems are solid. So the first order of business was to repair the roof and any other areas where leaks might rain on our parade. 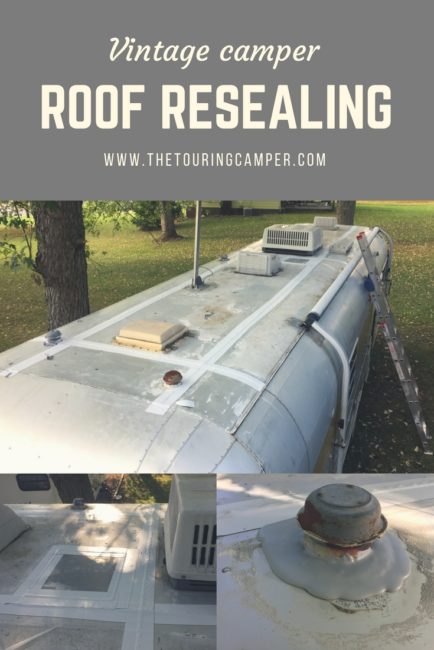 Before we bought Tilley, we inspected her for signs of water leaks, but aside from water damage related to the seal around the door, we didn’t find any evidence of a problem. At one point in her past, however, her roof was coated with some kind of water-proofing white “gunk” (that’s my very official term since I have no idea what it was 🙂 ). And this “gunk” was coated in a layer of algae and dirt. Yuck.

My plan was to scrub off as much of the algae/dirt as I could and then see how the seals looked. According to the Aluminum Anodizers Council–yes it’s a real thing–you have to use a mild soap with a pH between 6-8. That unfortunately ruled out my normal go-to camper cleaner, Charlie’s, as it has a pH of 10.7 and could potentially de-anodize the camper’s surface. So we settled on using original Dawn dish soap, and as you can see in these pictures it worked really well! 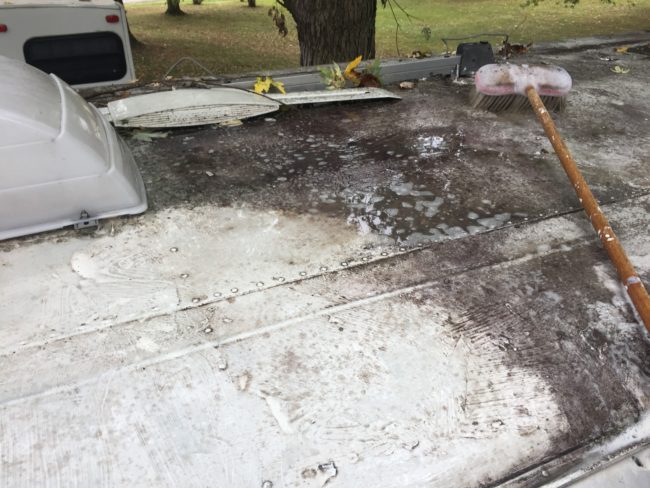 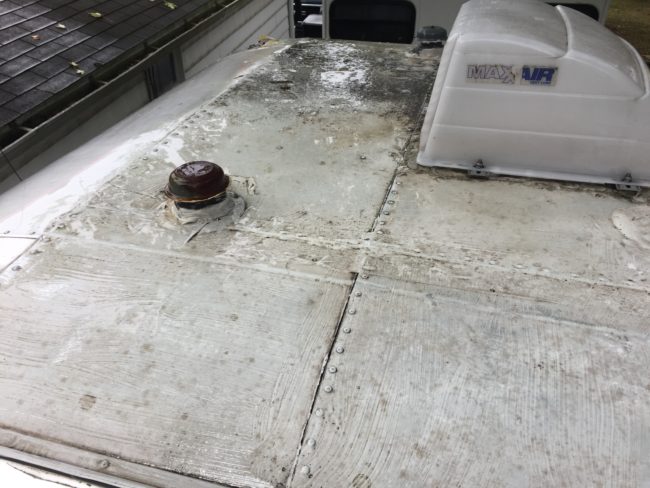 Even the kids got involved and we had a fun–albeit wet–afternoon. 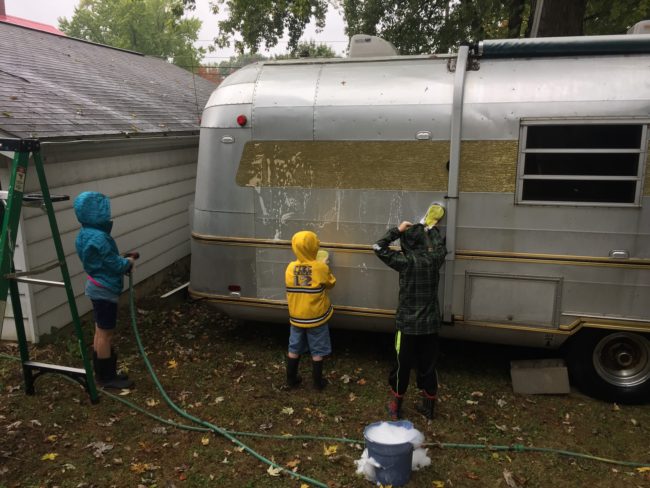 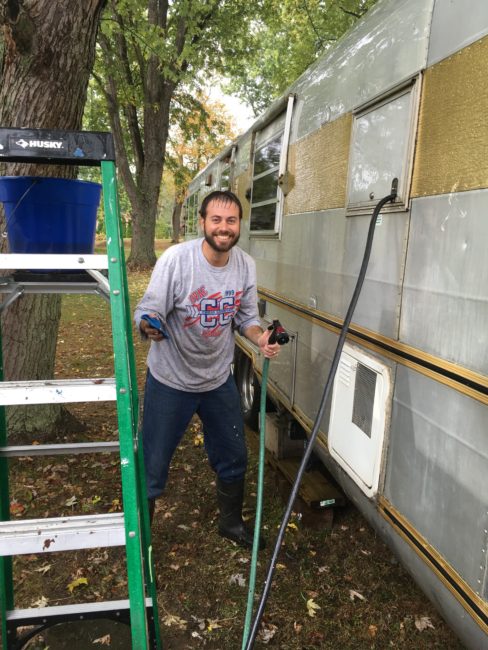 All seemed to be good … until it rained a few days later. That’s when we discovered a small puddle in the kitchen area. ARGH! While I was scrubbing the roof I must have disturbed the white “gunk” or other seals. 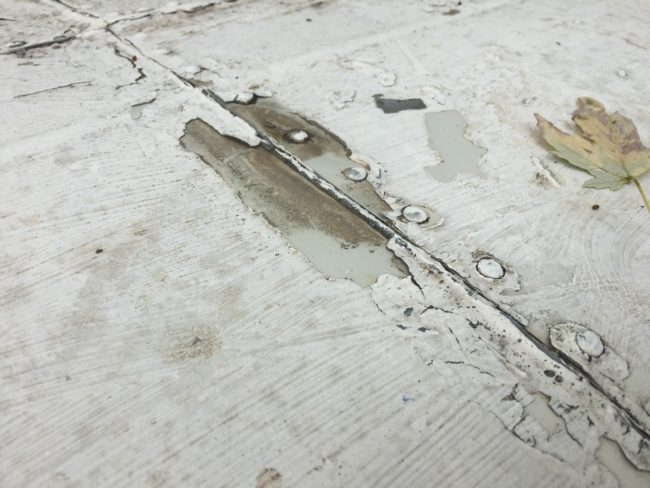 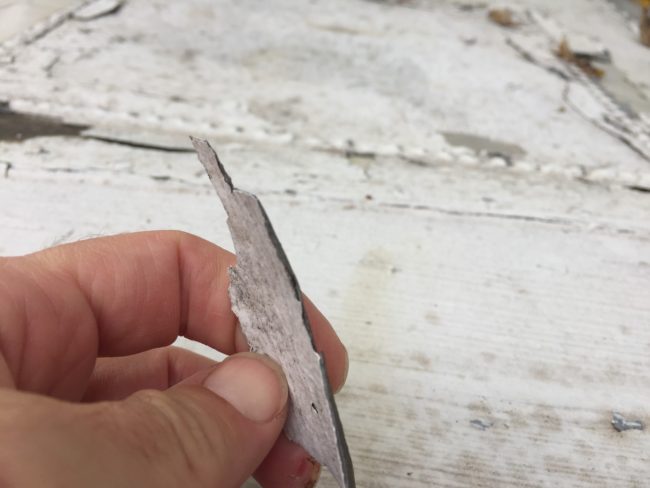 With more rain in the forecast, I needed to get a game-plan–and fast–for vintage camper roof repair. I learned quite a bit from reading lots of forums and asking questions on the Silver Streak Trailer Folk Facebook page (people are so helpful in this group!):

I began by evaluating how thick the gunk was in each spot of the camper roof. If it was thicker, I started with the heat gun and putty knife. With the heat gun in one hand and the putty knife in the other, I would work slowly to remove strips of the gunk. Then I would switch to the acetone and Scotch Brite pads. 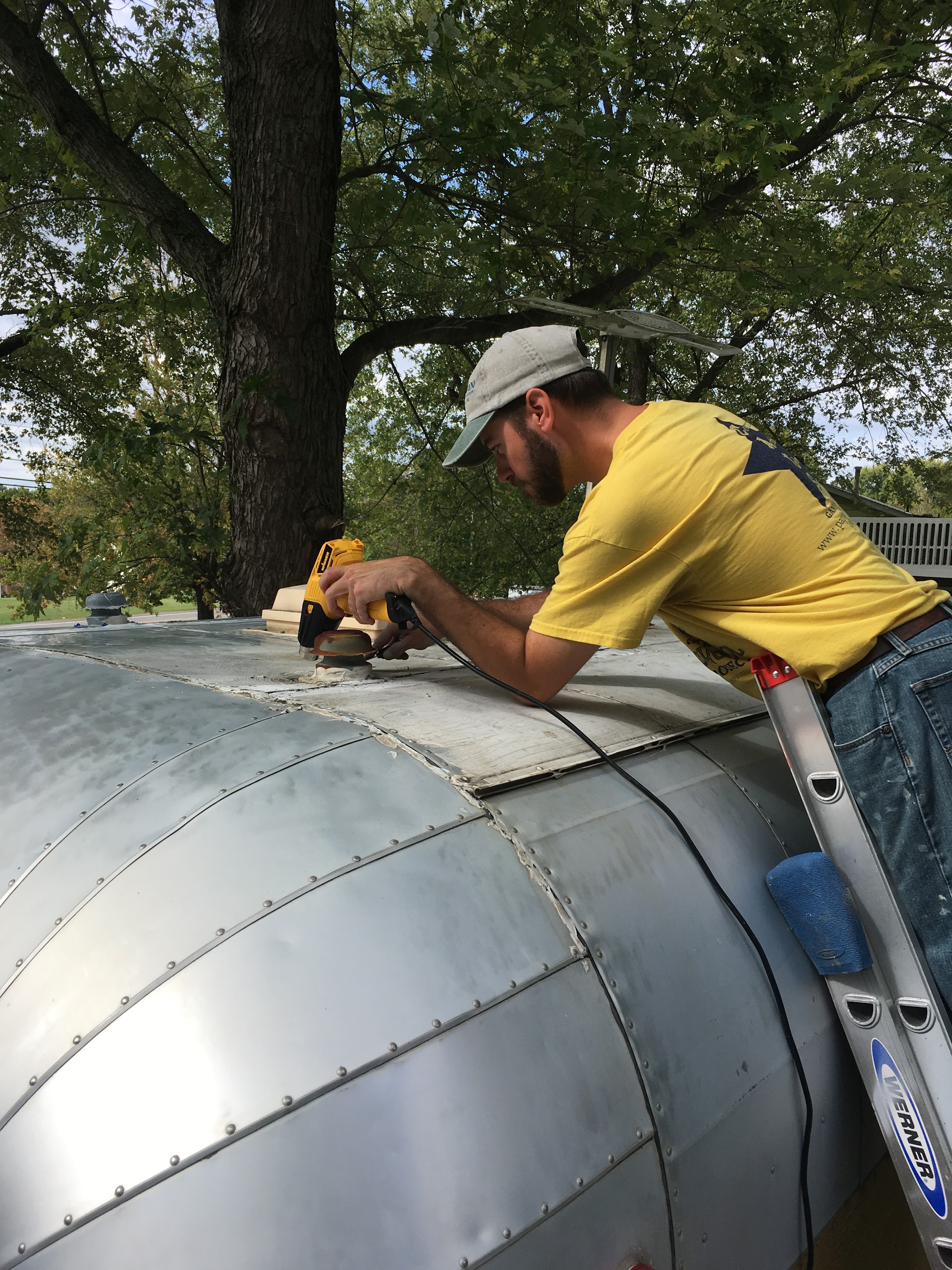 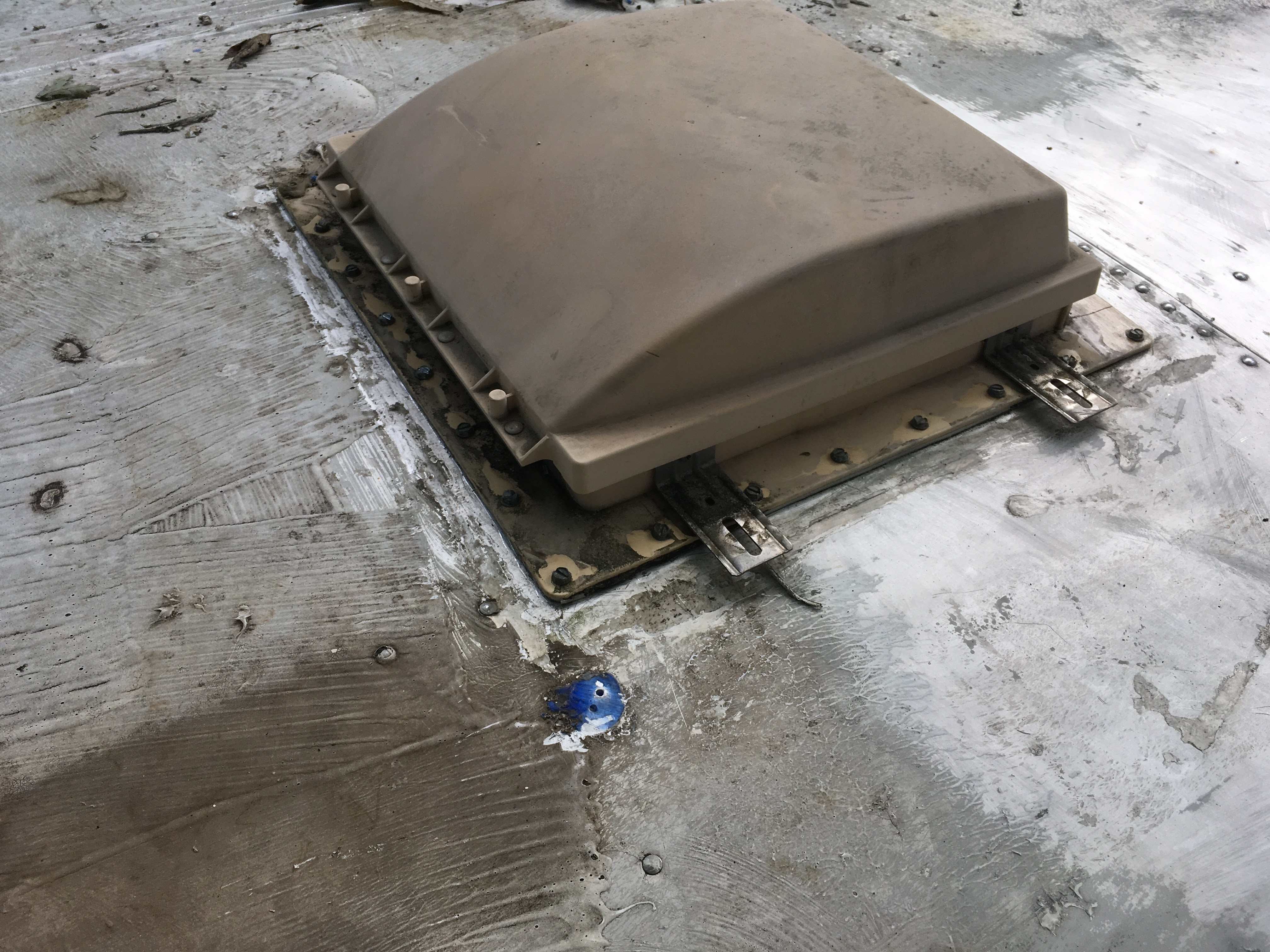 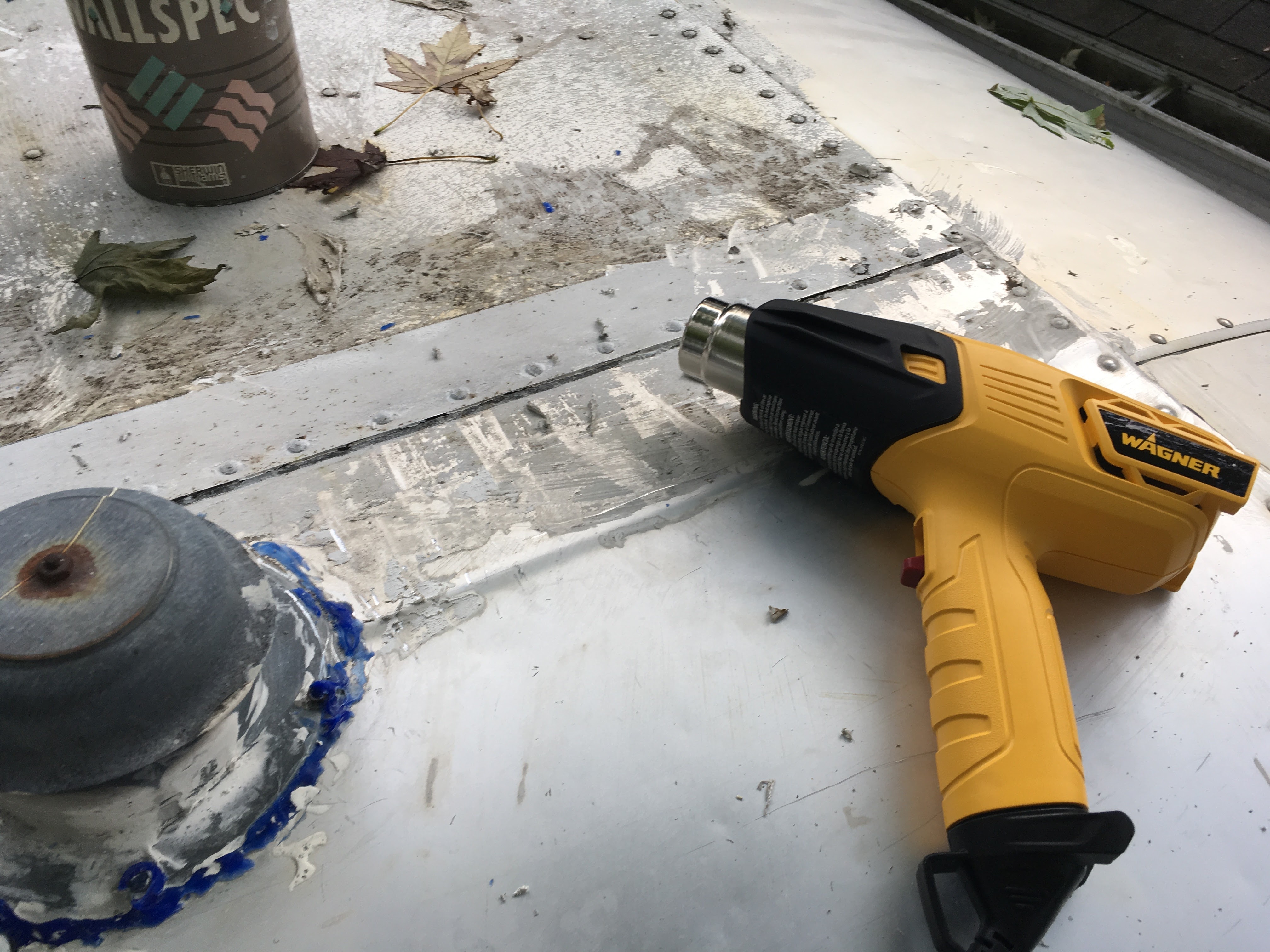 Notice the blue caulk–what were they thinking!

If the gunk wasn’t as thick, I skipped the heat gun step and went straight to the acetone. I dipped the Scotch Brite pad in the acetone and applied it to a spot on the camper roof. Then I did lots of circular scrubbing. Before the acetone dried I would use a rag to wipe up as much of the loosened gunk as I could. Then I repeated the process until I was down to the metal. 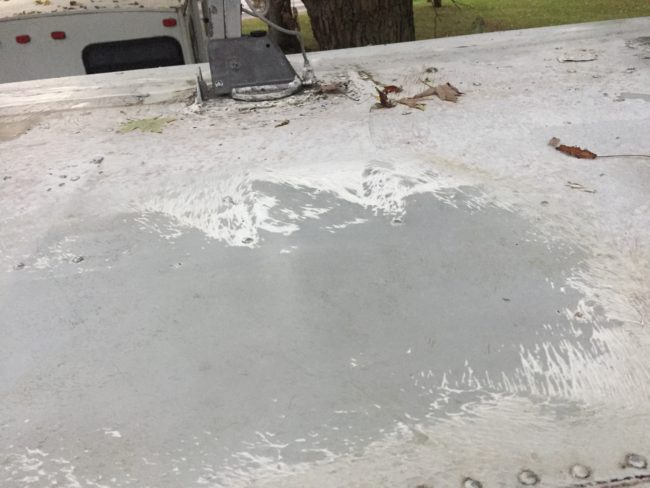 This was a slow process. I spent the better part of two days on a ladder working my way around the camper as I prepped the roof to be resealed. And I still haven’t finished all sections because I prioritized only the seam areas of the roof. When I have nice weather (and more time) I will finish up those final few spots and I plan to make a quick video showing the process.

Once the roof was free of “gunk” it was time to seal everything back up. After lots of reading and feedback from the forums, I decided to use the following:

To apply the EternaBond I had to peel away a little bit of the clear backing to expose the sticky side. After affixing this portion to the start of the seam, I then slowly extended the tape about a foot long, gradually removing the backing and smoothing the tape down over the seams. Once I had about two feet of tape applied to the roof, I used the roller to apply firm, even pressure, which ensured the tape was firmly affixed and there were no gaps. When I reached the end of the seam I was sealing, I used a utility knife to cut the strip from the tape roll. 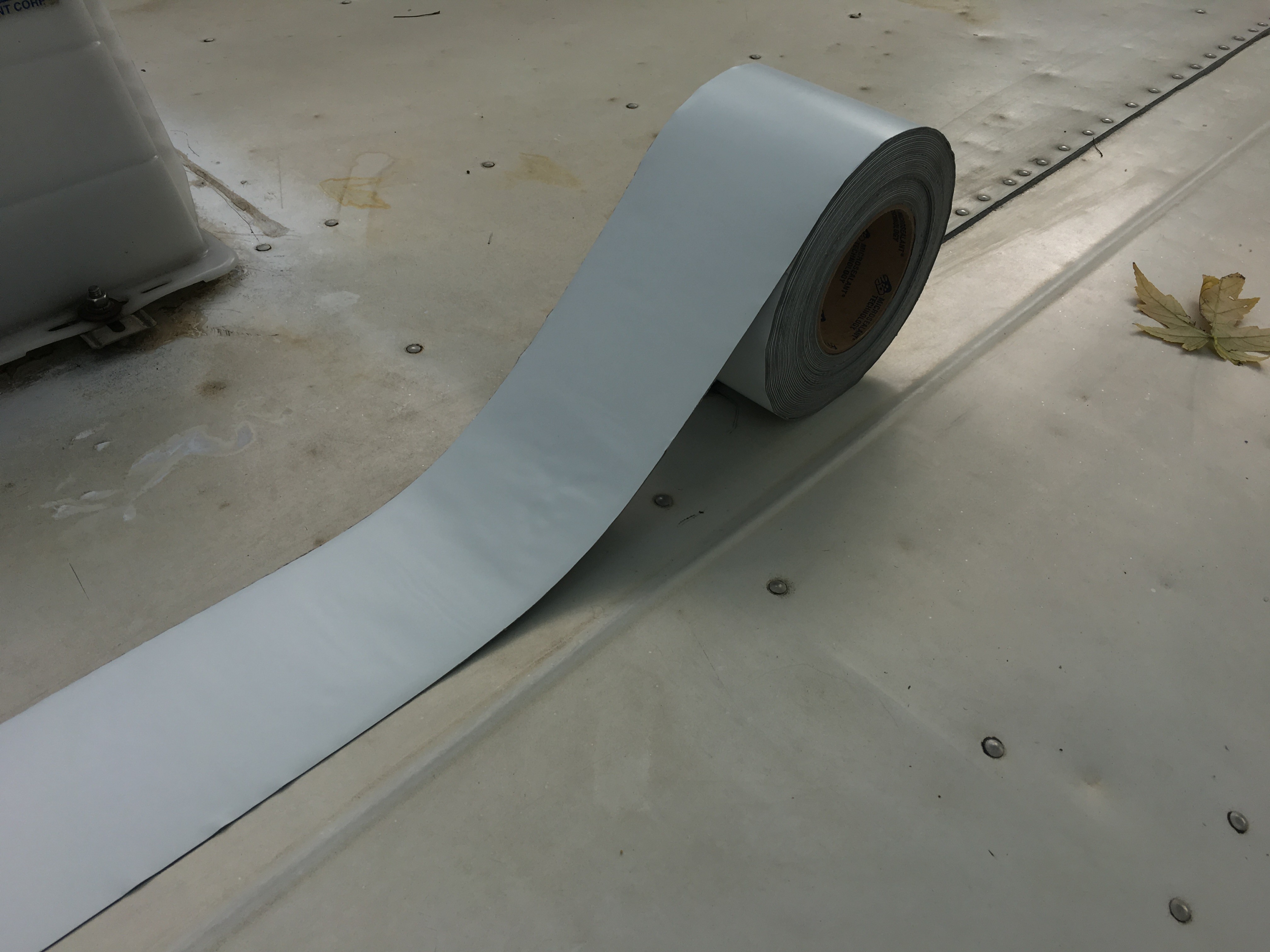 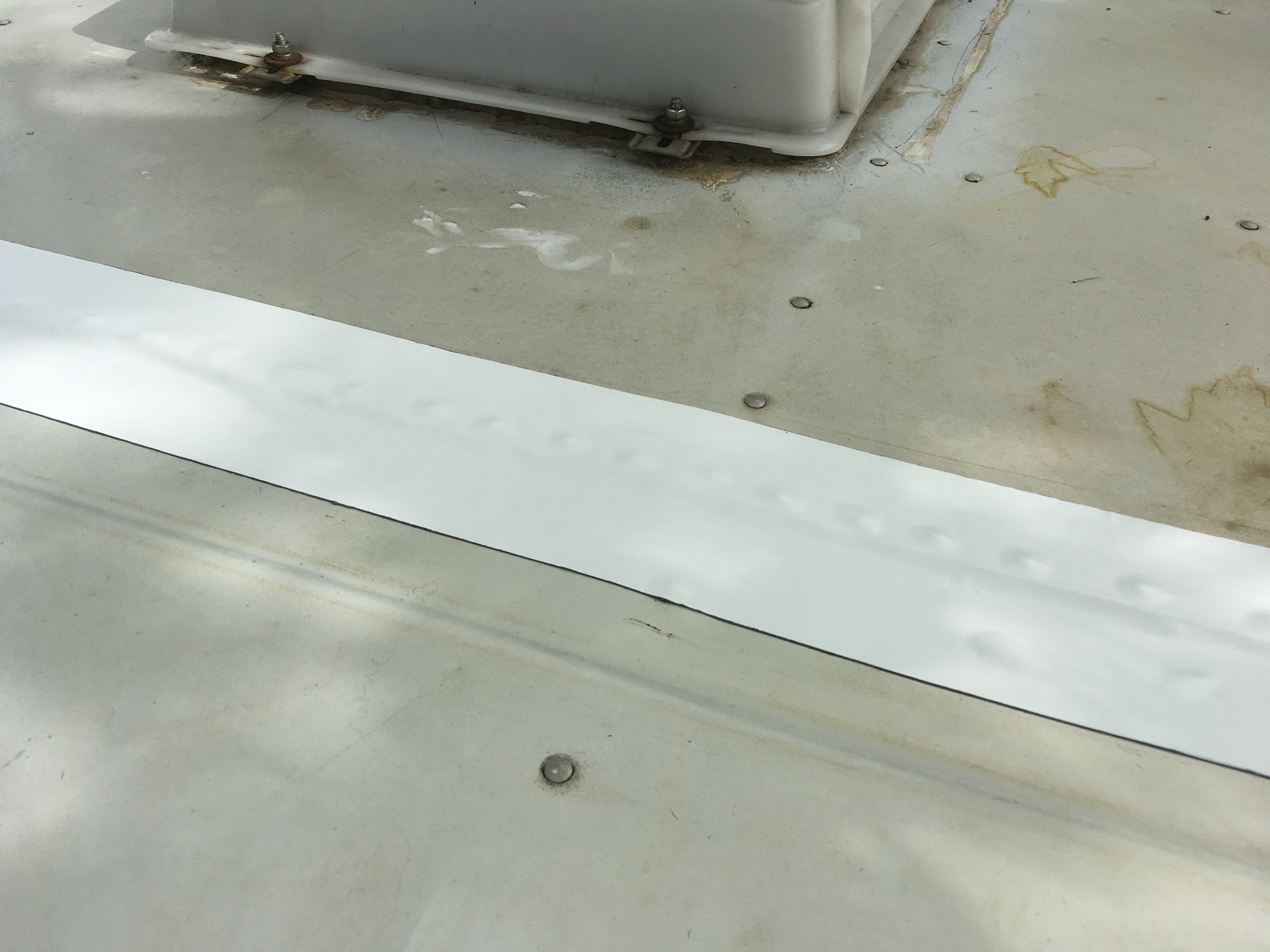 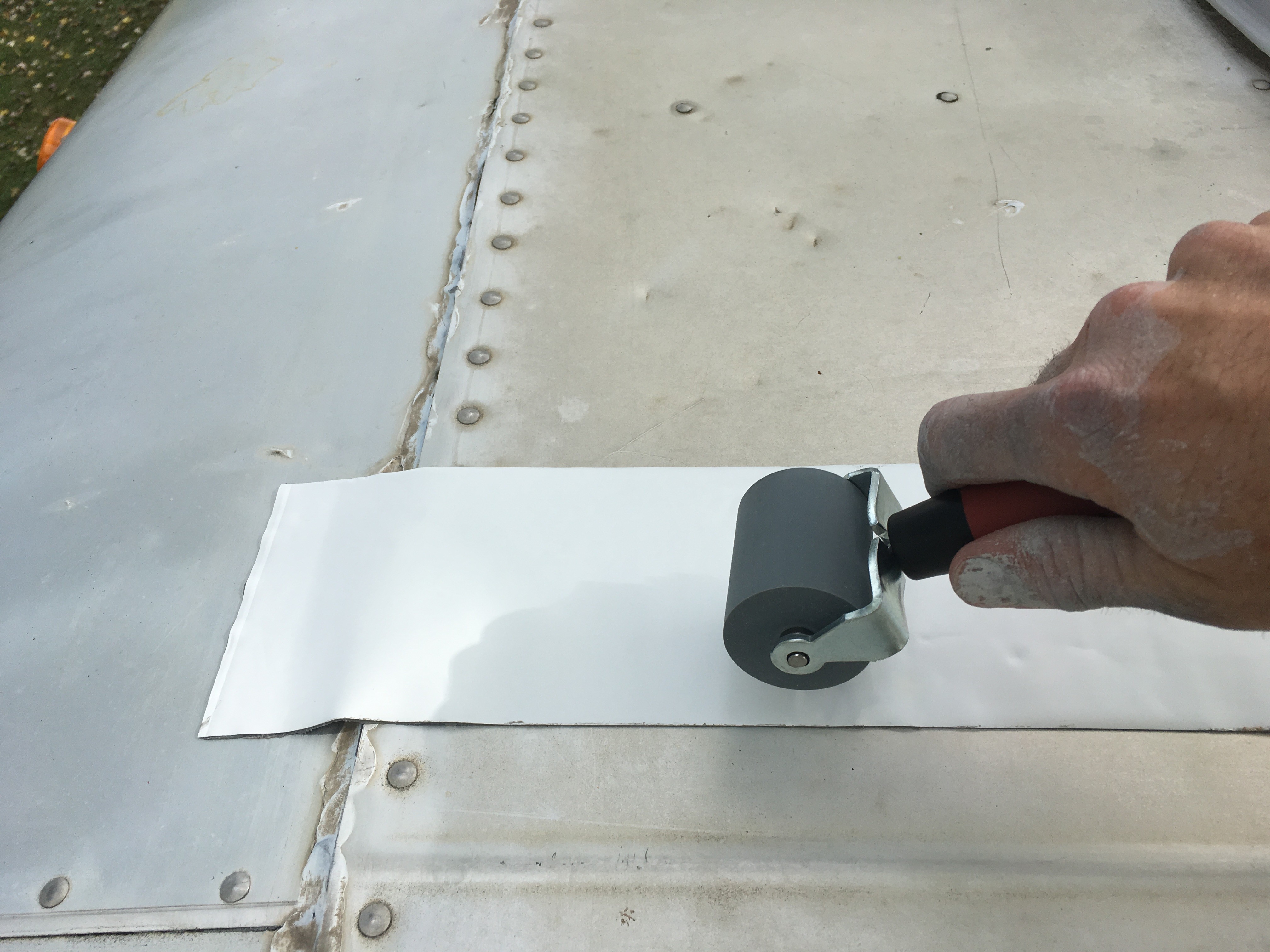 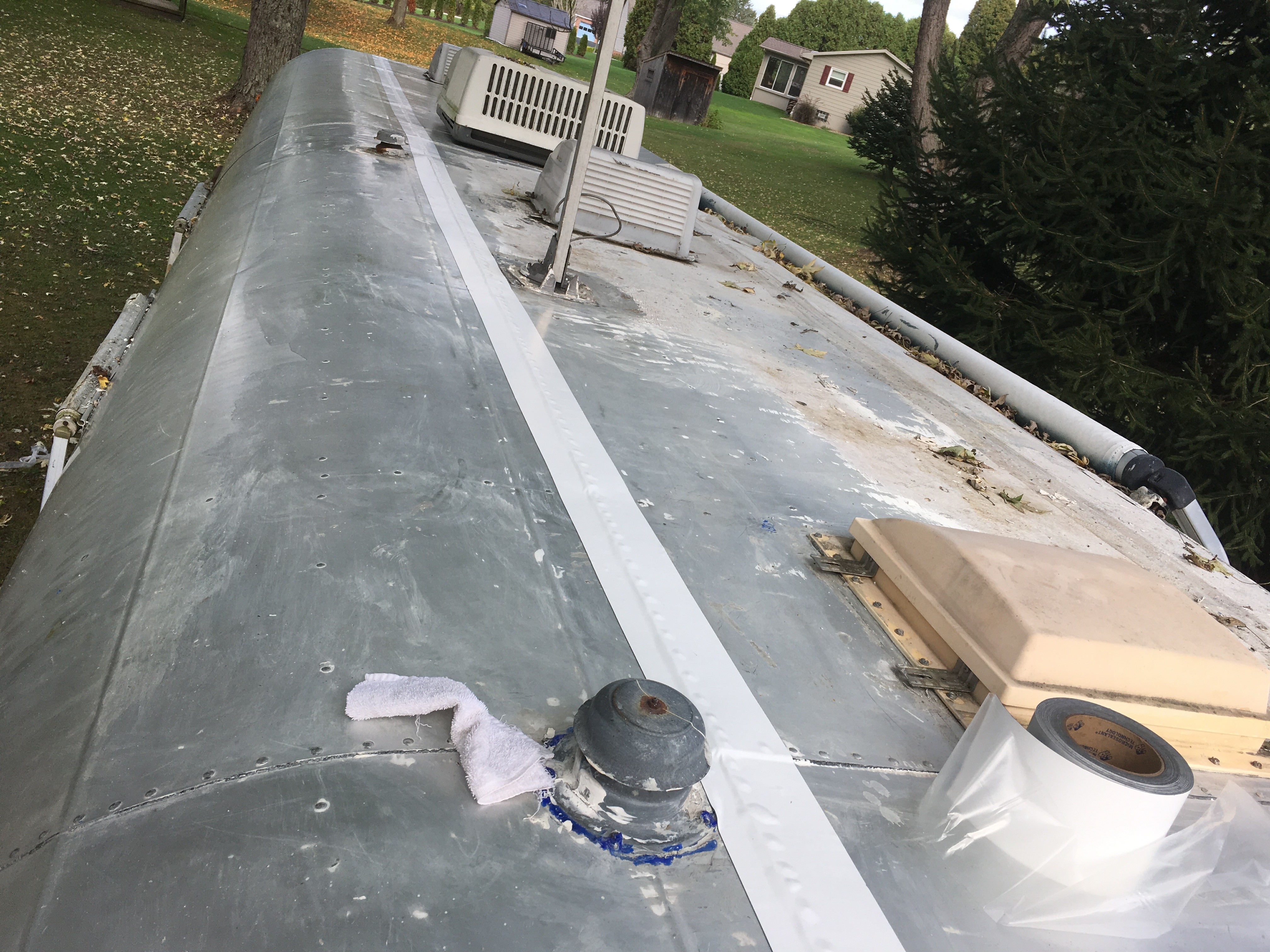 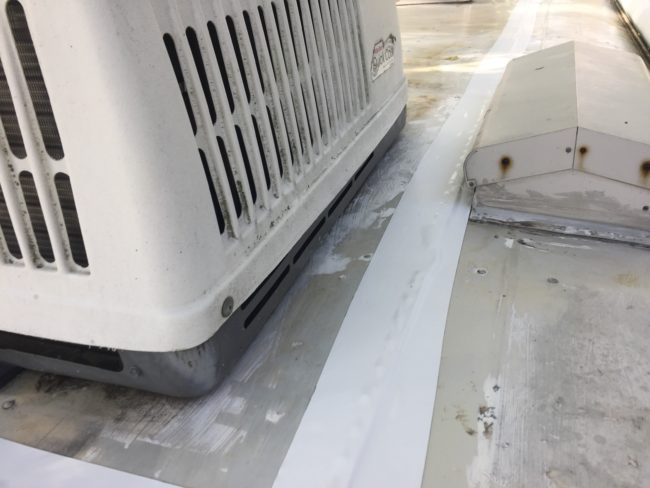 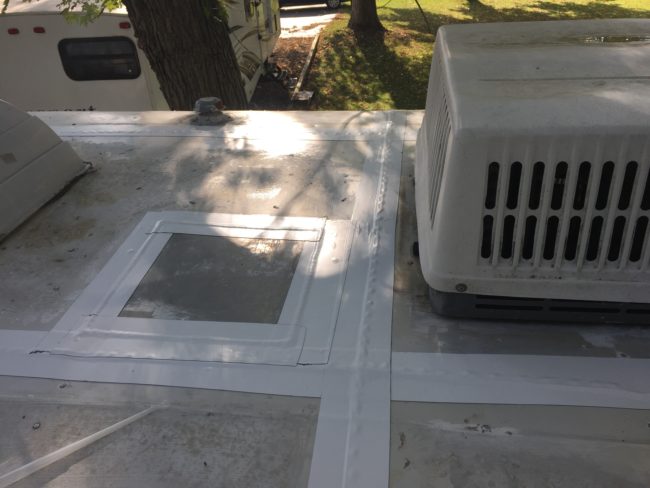 Applying the Dicor is much like applying self-leveling caulk. I used the caulk gun to apply even pressure as I sealed around vents and other problem areas. I had to make sure the caulk lines overlapped in those areas where I needed wider coverage. One helpful tip is to use painters tape to section off the area where you are caulking. After caulking is complete, it’s important you don’t wait too long to remove the tape or else it will get “sealed” in as well. But I did have to wait a few minutes until the caulk had set up just a bit (otherwise it was too runny) and then I could remove the tape to reveal nice crisp lines. 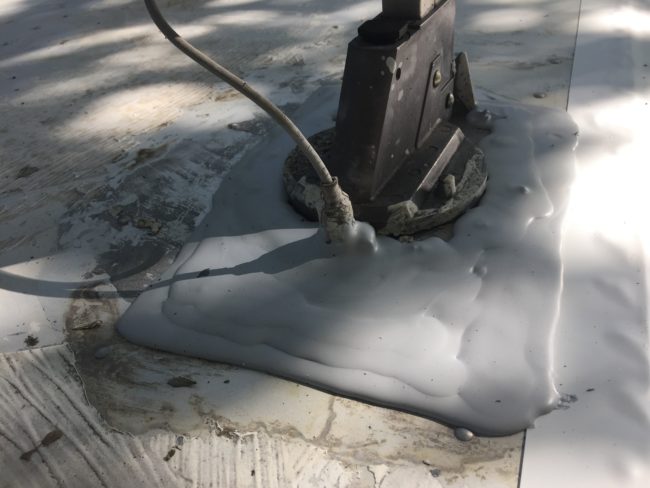 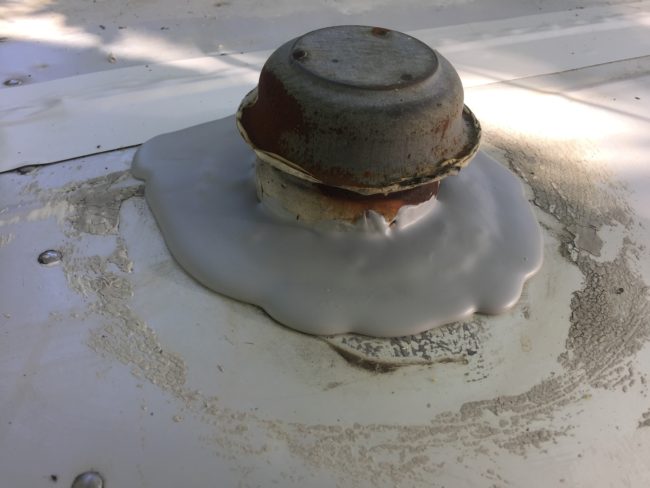 I plan to clean up and spray paint these vents at some point in the future. 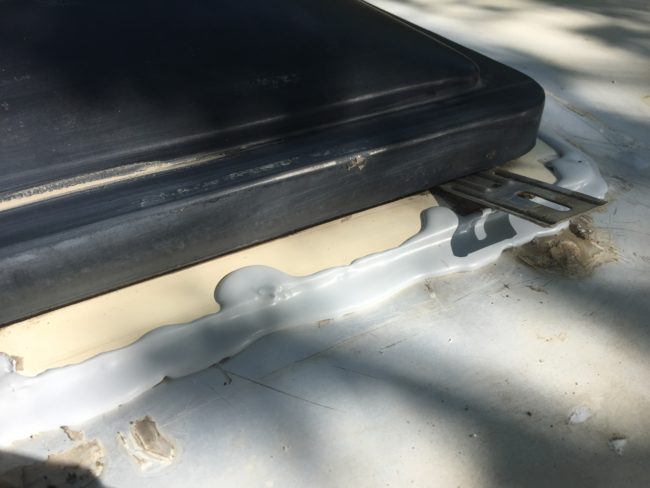 Here’s what the roof looked like after I had finished cleaning along the seam on the left; I still had the middle and entire right side left to do: 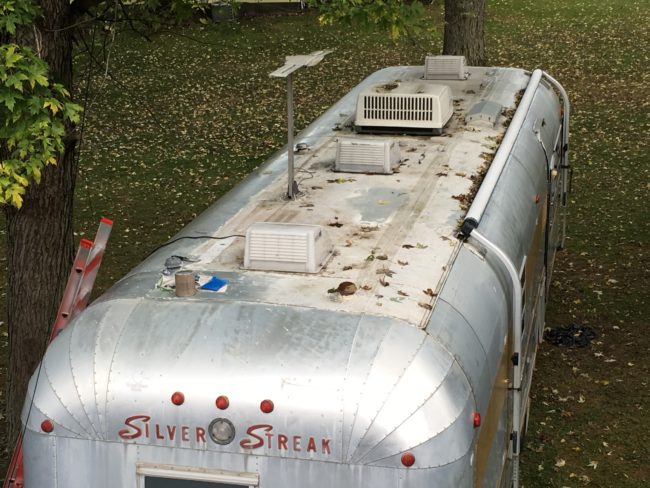 And here’s what it looked like before I did the Dicor sealing: 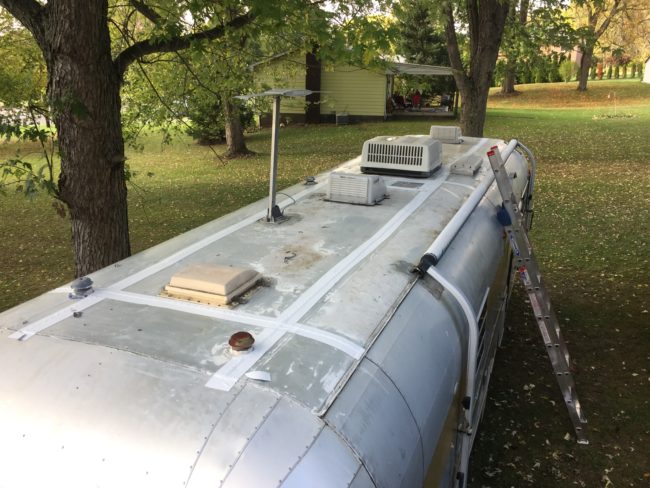 I still have a bit more work to do, but I feel like the worst of it is behind me. 🙂

Here is a time-lapse video of the removal and sealing process. Unfortunately in the second half of the video our tripod started bouncing in the wind–ugh. If we get another warm and sunny day, we plan to do a close-up video of the cleaning process and seam sealing, and we’ll add any additional videos at the end of this post.

It has now rained several times since I finished the camper roof repairs, and I’m thrilled that we have not had any more water leaks from the roof. Unfortunately the door seal continues to leak, so that is my next assignment. My supplies arrived this past week, thus as soon as I have a nice weekend to work on it, that will be my next project. Until next time!

For many families making their rounds of the Utah 5 National Parks, a visit to Bryce Canyon is a highly anticipated stop. With its sweeping vistas and spectacular hikes, Bryce offers something for everyone. But with most of the camping options concentrated immediately around Bryce, families that want to escape the crowds and explore Bryce END_OF_DOCUMENT_TOKEN_TO_BE_REPLACED

For many families planning a trip to the Utah region, their itineraries often center on hitting the high points of iconic stops like Grand Canyon, Zion, Bryce, and Arches. Several lesser-known parks are also worth the stop, though, and for families looking for ways to escape the crowds, Cedar Breaks National Monument should be on END_OF_DOCUMENT_TOKEN_TO_BE_REPLACED