Over the next several months we will be working to restore and remodel Tilley, our 1976 Silver Streak. Before we can tackle what Kristin calls the “fun” projects–painting and decorating–we need to ensure that her primary systems are solid. The first order of business was to repair the roof and any other areas where leaks might rain on our parade. The next assignment was to test the camper holding tanks to check for leaks or other surprises sometimes inherent in vintage travel trailers. 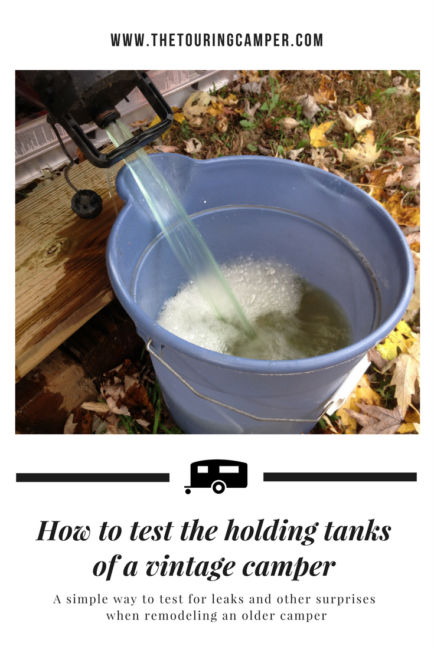 Note: This post contains affiliate links. If you make a purchase through one of the links, we will receive a small commission at no additional cost to you. Thank you for supporting The Touring Camper!

Because the Silver Streak has an enclosed underbelly, it is a bit challenging checking for tank leaks. Although we did not see any indicators of long-term problems, we felt it was best to make sure those systems were solid before moving forward with the rest of the remodel.

One of my strategies for testing the camper holding tanks was to add different food coloring to the kitchen sink, bathroom sink/shower, and toilet. I was hoping the food coloring would help me visually see any underneath leaks (should they be present), as well as confirm that the sinks and shower were all running to the grey tank.

I also kept track of how much water I poured down the toilet and sinks/shower drains. I wanted to fill them up as much as possible to check for any leaks. Thankfully the tank indicators still work, so I knew when to stop adding water. Then I let all that water sit for awhile. If the same amount of water that I put into the tanks later came out, it should be a safe bet that the tanks are not leaking. I explain more in the video below:

I later solved the mystery of the missing 1.5 gallons of water: I must have miscounted because after I repeated the test, I had the same amount of water coming out that I had put in. That was a relief–because having to replace one of the tanks would have been costly.

But now that we have confirmed that our holding tanks are not as large as we hoped, we are trying to make a final decision on whether to go with a composting toilet so that we can use the black tank as a secondary grey tank. Our current camper has 30 gallon holding tanks, and as a family of five we can only go about 3-4 days before we have maxed out the grey tank. And that’s with either no showering, or army showers. So going to a smaller tank means we’d probably only last 2-3 days. That’s definitely not ideal if we want to do any boondocking.

Although a composting toilet is expensive, having larger tanks added to the camper would probably be comparable in price (this isn’t something I feel capable of doing, so there would be the additional labor fee). And we’re not even sure we’d be able to add bigger holding tanks since there might not be adequate room underneath. The composting toilet would be an adjustment initially, but the long-term benefits probably make it the most logical solution, especially since we are hoping to be able to do some boondocking in the future. Decisions, decisions. We’ll keep you posted though!

For many families making their rounds of the Utah 5 National Parks, a visit to Bryce Canyon is a highly anticipated stop. With its sweeping vistas and spectacular hikes, Bryce offers something for everyone. But with most of the camping options concentrated immediately around Bryce, families that want to escape the crowds and explore Bryce END_OF_DOCUMENT_TOKEN_TO_BE_REPLACED

For many families planning a trip to the Utah region, their itineraries often center on hitting the high points of iconic stops like Grand Canyon, Zion, Bryce, and Arches. Several lesser-known parks are also worth the stop, though, and for families looking for ways to escape the crowds, Cedar Breaks National Monument should be on END_OF_DOCUMENT_TOKEN_TO_BE_REPLACED