At Straits State Park in St. Ignace, Michigan you will find a camping spot with a view: Located just across the Mackinac Bridge in the Upper Peninsula (UP), it provides the perfect base camp for touring Mackinac Island and other popular UP spots like Sault Saint Marie and Tahquamenon Falls. We really enjoyed our time camping right at the northern end of the Mackinac Bridge, even though we made one tactical error en route to Straits … read on to find out what! 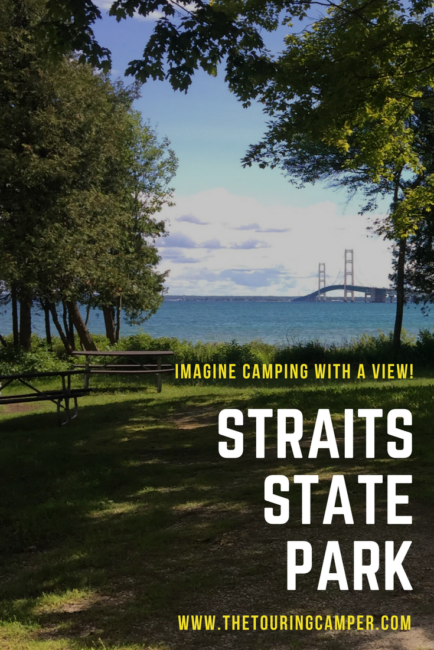 So what was our “tactical error”? We planned to have a “day-off” at Straits to re-supply our groceries and do any other necessary shopping before heading further into the UP. But as the locals will tell you, once you cross the bridge into St. Ignace you ARE IN the UP. This means to get to a big grocery store like Meijer, a Wal-Mart, clothing store, etc., you MUST either drive all the way to Sault St. Marie OR go back across the Mackinac Bridge (which charges a toll every time you cross).

Although there is a great little grocery store in St. Ignace, we found the prices to be significantly higher and the selection was limited. Meanwhile, Kristin had forgotten a belt for her jeans and since we had so many cool days in the forecast she planned on picking one up at a Walmart stop–except there were no close Walmarts on that side of the bridge. After searching the dollar stores in town and asking around she quickly discovered there were practically no options for buying clothing in St. Ignace. Thankfully she finally found a local thrift shop to purchase a belt, so if you ever find yourself in St. Ignace make sure to stop by the Hope Chest Resale Shop!

Campground: It is very evident that the park management team at Straits Campground takes pride in maintaining this park! We often saw park staff in the campground mowing, cleaning, patrolling, and even repainting lines on the road. This attention to detail lead to a well manicured park.

There are two main sections to the campground: sites 1-116 are at the bottom of a large hill right on the banks of Lake Huron and sites 118-270 are at the top of the hill and are larger, mostly graveled sites.

Lower campground (sites 1-116): During our stay this portion was far more popular mostly due to the the scenic views of the Mackinac Bridge that many of the sites enjoy. All of the sites directly on the lake have amazing views but unfortunately NONE of these sites have electric hook ups. Sites 78, 79, 80, 81, 82, and 83 are nice sites that are just across the road from the lake, so they offer some views of the bridge. The sites are grass and appeared to get somewhat soft (there were some tire ruts), so we were glad we were staying in the other loop with gravel sites since we only have two-wheel drive. In this lower campground 116b is a very nice site, but it does not have a direct view of the bridge.

Upper campground (sites 118-270): This portion of the campground has some great sites that are very big-rig friendly. Sites 177, 179, and 180 are full sun but nice, pull-through 50 amp spots. Sites 182 and 184 (our site) have awning sides facing each other but there is a small patch of woods that offers privacy between them. If we were to return I would stay in site 187, which is technically a pull through site but is situated more like a back in site.  It is a very large site with a decent amount of privacy and a direct view of the playground. Another site with a large private yard is 254, but it does have full sun.

Cell and TV reception was good, but there was no wi-fi in the park. Nearby restaurants and the St. Ignace public library offered wi-fi.

While all the bathrooms were very clean there was a vast difference between the lower and upper campgrounds:

Lower Campground: This section of the park had two completely new shower houses. They were immaculate and well designed. In addition to the regular bathroom area the other end of the building had four private showers, one of which was a handicap-accessible/family bathroom.

Upper Campground: While these two shower houses were much older they had been remodeled with fresh tile which was a great improvement over other Michigan State Parks that we stayed at on this trip. However, the older showers did have venting at the top and bottom that on chilly mornings definitively had an “open-air” feel. The water wasn’t always hot: two out of four showers were lukewarm.

Amenities: Straits is a bit sparse on amenities as most people use this campground as a base camp to explore the local area and Mackinac Island, but it does offer the following:

Touring: This is where this park shines! We used this park as a base camp to go to Mackinac Island. We found it a fairly easy for the whole family to bike from the campground to Star Line Ferry’s Railroad Dock 1. (To avoid the busy major roads we followed this path: From the campground entrance, go left on Church Street, right onto Bertrand Street, left onto Hombach Street, then at the bottom of the hill cross the street and ride through the American Legion park, which is right beside the Star Line parking lot).

We paid the extra fee ($10 per bike) to take our bikes over on the ferry to Mackinac Island and were very glad we did! To rent bikes on the island, prices started at $6/hour, so that was a huge savings! (Insider tip! We had originally planned to have our youngest ride his bike with training wheels, but we are so glad we nixed that plan because once we got to Mackinac Island there are signs posted saying training wheels are NOT allowed! So instead we hooked up the Tag-A-Long bike, and because it was connected to my bike the ferry did not charge us for an “additional” bike. We only had to pay for four bikes and saved $10!)

We really enjoyed our time on Mackinac Island and will definitly return some time and spend more time there (possibly sans kids and maybe even stay overnight). Here are a few pictures to give you a taste of Mackinac Island; Kristin will have a full touring post about our time in the UP going up on the website soon with more details about Mackinac Island.

After taking our full trip, we have decided that if we return to the UP, we will most likely stay at Straits and do day trips rather than camping further up in the UP. We’d also like to explore the Mackinaw City region, so a visit to Aloha State Park might be in our future.

*Michigan DNR sites require a passport for entry. It’s $11 annually for residents, $9 for a daily nonresident pass, or $32 for an annual nonresident pass. We went ahead and purchased the annual pass, since we were scheduled to camp at several Michigan state parks on this trip.

For many families making their rounds of the Utah 5 National Parks, a visit to Bryce Canyon is a highly anticipated stop. With its sweeping vistas and spectacular hikes, Bryce offers something for everyone. But with most of the camping options concentrated immediately around Bryce, families that want to escape the crowds and explore Bryce END_OF_DOCUMENT_TOKEN_TO_BE_REPLACED

For many families planning a trip to the Utah region, their itineraries often center on hitting the high points of iconic stops like Grand Canyon, Zion, Bryce, and Arches. Several lesser-known parks are also worth the stop, though, and for families looking for ways to escape the crowds, Cedar Breaks National Monument should be on END_OF_DOCUMENT_TOKEN_TO_BE_REPLACED