A couple years ago we visited the happiest place on earth. This summer we visited the buggiest place in the country. Ok. Maybe that’s an exaggeration. Apparently there are other places in the U.S. that have earned the right to be called the buggiest. But at certain times of the year, we have learned that Michigan’s Tahquamenon Falls State Park could give all of them a run for their money.

Before we even arrived in Paradise–yep, that’s the name of the town where Tahquamenon is located; I think the antonym might be better suited!–we had an inkling our visit would be interesting. While camping at Interlochen State Park, we chatted with a gentleman who had previously stayed at Tahquamenon. The first thing he asked upon learning we were headed there was, “Do you have bug spray?” We assured him that we always come prepared with bug spray, to which he replied that when he last visited the falls, the mosquitoes had been so bad he had cut his visit short.

This one chance conversation wouldn’t have concerned us too much, but then at Straits State Park we met another couple who had just come from Tahquamenon Falls State Park. They had only lasted two nights at the falls because the mosquitoes were so bad. It was at this point we started having second thoughts and wondering what we had gotten ourselves into–and of course we were scheduled to spend four nights at the Tahquamenon Falls campground. Our visit was not without incident, but the good news is, we lived to tell about it! 🙂 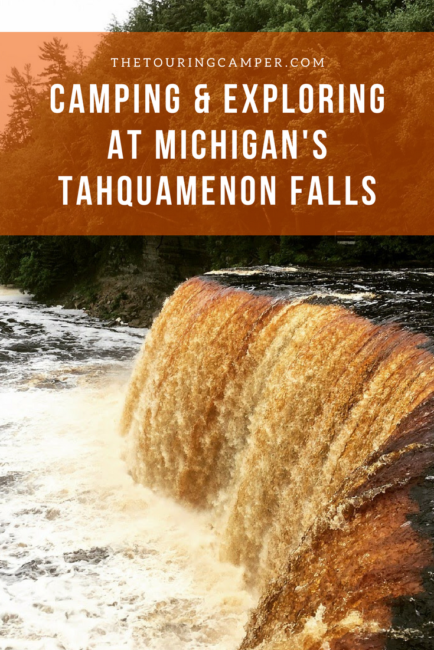 Note: This post contains affiliate links. If you make a purchase through one of the links we will receive a small commission at no additional cost to you. Thank you for supporting The Touring Camper!

Tahquamenon Falls did not disappoint as a great basecamp while we toured the eastern portion of the Upper Peninsula (UP). But yes the bugs were BAD! We met some campers who said staying at Tahquamenon Falls in August is amazing with little to no bugs. During our stay it had been a particular rainy season, which made the mosquitoes especially terrible. (We had to contend with black flies as well, but at least we escaped the stable flies until our next stop in Munising!) So our first piece of advice: Before heading to the falls make sure to do some research on the “BUGcast” and come prepared! (Check out this post from RoadTreking to learn more about the black fly dance that we witnessed many times while visiting the UP.) Second piece of advice: Buy a Thermacell. I don’t think we would have survived the Upper Peninsula without it. In hindsight, a screen house would have been extremely helpful as well.

Now that we’ve warned you about the bug situation, let’s move on to the fun part–the mighty Tahquanemon Falls:

It’s something, isn’t it?

Campground: Tahquamenon Falls State Park is a really large park with two distinct camping areas: Rivermouth and Lower Falls. Despite the bugs, both campgrounds were nearly full the entire time we were there. I will first share what they have in common then explain some differences and make site recommendations.

Both campgrounds (like other Michigan State Parks) allow you to set up your equipment any way you see fit as long as it is between the white marks on the road that indicate site lines. We saw some seriously creative site setups. This may have been due to the fact that the electric boxes were at times located in bizarre places. Our site, 21, was considered a pull-through, but the only way our electric cord could reach the electric box was by backing in at an angle.

The other thing you need to know is that the two campgrounds are NOT close to each other, nor are they close to much of anything. Once you enter the park expect to drive 10-40 minutes (depending upon which entrance and which campground you are going to) to arrive at the campground. In Paradise you’ll find a few small restaurants and convenience stores, but that’s about it. (So come prepared!)

Rivermouth Campground: This campground is in the southeast portion of the park where the Tahquamenon River flows into Lake Superior. It has two modern loops that are all fairly level sites with a decent amount of space between each. Additionally there is a primitive camping area that has some great private sites with great views of the river. It was reported that this campground has less bugs due the winds off Lake Superior, but since they still swarmed the van when we drove through I am not so sure there was a great deal of relief.

Lower Falls Campground: This campground has two distinct areas–the Hemlock and Portage Loops. They were fairly similar in site quality and spacing but did have two differences. The Hemlock section is at the top of the hill, which is one of the few places in the park where you can get limited (1-2 bars on Verizon WITH booster) cell reception. Once you go down the hill to the Portage section all chances of reception were gone. The Portage loops are located very close to the Lower Falls.

Bathrooms: The bathrooms were pretty much the same in the entire park and were fairly clean given the volume of individuals using the bathrooms. Mosquitoes were an ever present problem in the bathrooms and shower stalls, many of which met their demise squished on the walls.

Amenities: The lower and upper falls are the main attraction at the park, but each loop has a playground area and there are some planned activities for the kids each weekend. If you are looking for hiking, mountain biking, snowmobiling, or back road driving (to try to spot a moose on the loose of course! 🙂 ) then Tahquamenon is a great place to be. Since there are very few stores or restaurants in the area, the park offers a couple dining options in the park. The Lower Falls area has a gift shop and small snack station. The Upper Falls has a full service restaurant and a micro brewery.

Touring: In addition to visiting the falls, Tahquamenon was our basecamp to visit the following attractions:

SOO Locks in Sault St. Marie: We really enjoyed our trip to the SOO Locks where we watched several large lake freighters navigate the amazing locks. The ship schedule changes by day, but you can call the visitors’ center to find out that day’s schedule (906-253-9290). We also learned from some more avid ship-watchers that once the boats go through the locks, you can drive downstream to Mission Point and watch them round “the bend.” This was fun and if you are a fan of this sort of thing you will probably enjoy our video of the locks below.

In addition to visiting the SOO Locks we also did some grocery shopping (the only place we found on our trip through the UP that had major stores like Walmart) and visited the West Pier Drive In. The burgers at West Pier were some of the best we have sampled on any of our travels!

One fun fact: Our day in Sault St. Marie was completely bug-free! 🙂

Whitefish Point:  During the early part of our trip, various people told us we needed to go see Whitefish Point where we could visit the maritime museum, climb the lighthouse, and walk along the round rock beach. With so many glowing recommendations we decided to add it to our to-do list. As we pulled into a parking spot, though, we started to notice a few things:

So after eating our lunch–in the car–we decided to cinch the hoods down, drown ourselves in bug spray, and make a mad dash for the rock beach to take some pictures and shoot this video! This is indeed a beautiful and unique place to visit but the day we were there it was impossible to truly enjoy due to the mosquitoes.

Newberry: To escape the bugs and the rain one day, we decided to explore the little town of Newberry, where you can find groceries, laundromats, gas, and more. We first toured the Luce County Historical Museum, which served as the county jail and sheriff’s residence for over 70 years. We then stopped by the local library and used the free wi-fi to check email and do some work before buying used books from their book sale room–which was perfect because Jarrett forgot to bring a book to read! Thanks to a tip from one of the ladies at the historical society, Kristin then explored the local thrift shop and bought a few pairs of pants to combat the cooler-than-expected temperatures.

The Fish House: This small restaurant in Paradise, Mich., boasts some of the best and freshest whitefish anywhere! Everything you order was swimming earlier that day! But you better get there early enough, because once the food sells out, the restaurant closes for the day. Also, bring cash, because they do not accept credit cards.

Point Iroquois Lighthouse: This was a great free lighthouse (donations appreciated) along the Whitefish Bay National Forest Scenic Byway, which was my preferred route from the state park to Sault St. Marie. The site offers a small museum area and guests are welcome to climb the lighthouse.

*Michigan DNR sites require a passport for entry. It’s $11 annually for residents, $9 for a daily nonresident pass, or $32 for an annual nonresident pass. We went ahead and purchased the annual pass, since we were scheduled to camp at several Michigan state parks on this trip.

For many families making their rounds of the Utah 5 National Parks, a visit to Bryce Canyon is a highly anticipated stop. With its sweeping vistas and spectacular hikes, Bryce offers something for everyone. But with most of the camping options concentrated immediately around Bryce, families that want to escape the crowds and explore Bryce END_OF_DOCUMENT_TOKEN_TO_BE_REPLACED

For many families planning a trip to the Utah region, their itineraries often center on hitting the high points of iconic stops like Grand Canyon, Zion, Bryce, and Arches. Several lesser-known parks are also worth the stop, though, and for families looking for ways to escape the crowds, Cedar Breaks National Monument should be on END_OF_DOCUMENT_TOKEN_TO_BE_REPLACED