Prince Gallitzin State Park in Patton, Pa., is a large camping haven in the Laurel Highlands of south central Pennsylvania. Popular among boaters and anglers, this state park is packed with family-friendly amenities like a swimming area, geocaching loop, and frisbee golf course. Outside of the park, the region has a lot to offer no matter what your camping style happens to be. From miles of forest and countryside to explore, to historical stops and national park visits, you’ll find something for everyone when you visit Prince Gallitzin State Park. 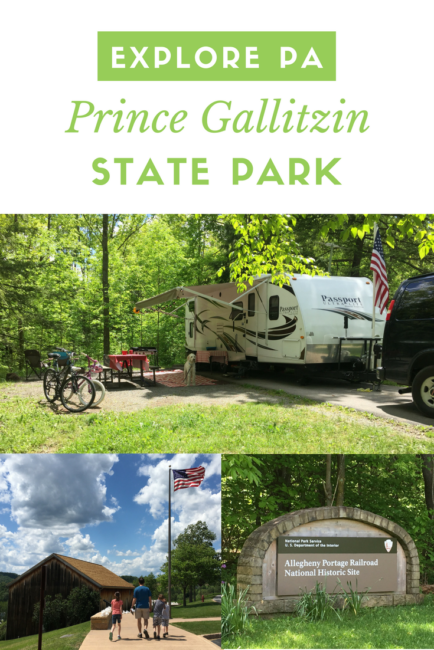 When we arrived at Prince Gallitzin on the afternoon of Memorial Day our site was not yet vacant. To kill time we drove around the state park until we found a place to park the camper so Jarrett and the kids could squeeze in some fishing time. After the kids had hooked several “twig” fish and crossed one too many lines, we headed back to the campground to see if we could check in. We discovered quite a back-up at the dump stations, which is also where we needed to fill up our fresh water tank. (One of the park rangers said at one point there had been about 30 rigs waiting in line to dump at the three dump stations.) After a relatively short wait, we had soon filled up and we were set up in our site.

Before diving into the details of the campground, you can watch the video below for a quick overview of our camping adventures at Prince Gallitzin State Park and the surrounding area:

Prince Gallitzin features more than 400 campsites and cabins with seven loops that offer a mix of electric and non-electric sites. We learned from regular campers that there are parts of the campground that tend to be quieter (Beech Loop) and other parts that get a bit more rowdy on the weekends. All of the sites are paved asphalt and most are fairly level left to right, but some do have some slope from front to back (I had to put the tongue of the camper pretty low to get us level).

The campground at Prince Gallitzin offered something that we had not seen before: some sites come with a second site for additional parking. If you have a big rig or if you need additional parking (perhaps for bringing a boat?) one of these “extra parking” sites would be perfect. We saw several people who brought their tow vehicle and camper plus a tow vehicle and boat. The extra parking sites are: 7, 11, 23, 25, 145, 147, 149, 151, 163 (all of these had the extra site across street) and 182, 189, 214 and 371 (these had the extra site next to the primary site on the same side of the street).

Brief Description of loops (watch the video below to ride along through many of these loops):

Bathrooms: The park had updated the bathrooms at some point and they were fully functional during our stay. Park staff stopped daily at the bathrooms but it seemed they did little more than broom them out and wipe the sinks and toilets down–this was likely due to the small number of people using the bathrooms during the week.

The showers were hot, but were all push-button. It looked like new shower curtains had recently been added. Kristin was not a particular fan, however, of the number of large creepy crawlies (i.e. spiders) hanging out in the shower area.

Amenities: Although this park is pretty much in the middle of nowhere, you will not get bored here. Those that enjoy outside recreation will find this campground a haven to explore the great outdoors. The campground offers a:

The campground also offers a well-stocked camp store and laundry facilities. And one more thing to note: If you looking for a place to truly unplug, Prince Gallitzin had very little cell reception in the campground, at least for Verizon plans (although better cell coverage could be found by taking a short drive). We were able to connect to free park Wi-Fi outside the camp store. According to signs posted at the bathrooms, the campground was setting up more reliable internet that guests could purchase for a small fee.

Other things to do in the larger state park:

Touring: In addition to the many things to do in the park we used this campground as our base camp to explore some of the other attractions in the Laurel Highlands region of Pennsylvania.

On this trip we visited:

This historic landmark highlights the ingenuity and determination that led to one of the world’s most incredible engineering feats. For a fee you can ride up the incline and watch the daily trains coming around the curve. Depending on the length of the train, the engine car may disappear from view before you’ve even seen the end of the train appear on the other side. Pack a picnic lunch and plan to stay for at least an hour or two.

A forgotten piece of Pennsylvania history, the Allegheny Portage Railroad completed the Pennsylvania Mainline Canal and created the first, direct route between Philadelphia and Pittsburgh. If you can, try to attend the park’s special “Living History” days where you can step back in time and learn about rope making, stone cutting, spinning, and more.

Our visit coincided with the 128th anniversary of the historic Johnstown flood that killed 2,209 people and devastated an entire region. As part of the anniversary events, the park staff offered special children’s craft activities and later in the day volunteers helped light luminarias for each victim. Although the visitor’s center exhibit area is small, you can walk out to what remains of the dam, as well as drive past historic spots that survived in the community.

Other things in the area we previously visited (some of these locations are about an hour away from the campground):

Look for more details about the Johnstown spots in an upcoming post.

Monthly Morsel: Campfire Beef BBQ Goulash
How to get a great night sleep … in an RV

For many families making their rounds of the Utah 5 National Parks, a visit to Bryce Canyon is a highly anticipated stop. With its sweeping vistas and spectacular hikes, Bryce offers something for everyone. But with most of the camping options concentrated immediately around Bryce, families that want to escape the crowds and explore Bryce END_OF_DOCUMENT_TOKEN_TO_BE_REPLACED

For many families planning a trip to the Utah region, their itineraries often center on hitting the high points of iconic stops like Grand Canyon, Zion, Bryce, and Arches. Several lesser-known parks are also worth the stop, though, and for families looking for ways to escape the crowds, Cedar Breaks National Monument should be on END_OF_DOCUMENT_TOKEN_TO_BE_REPLACED