Tucked just off Interstate 75 in the rolling hills of Kentucky is a place that is legendary in the horse community. Lexington’s Kentucky Horse Park is a mecca of sorts for horse lovers: Here visitors come to participate in horse shows, watch polo matches, and stroll through a network of horse museums. Given the scope of the horse park complex, general admission includes a complimentary second day ticket so guests can enjoy their visit without rushing to fit it all in one day. And that makes the adjacent Kentucky Horse Park Campground the convenient place to stay while visiting the area. 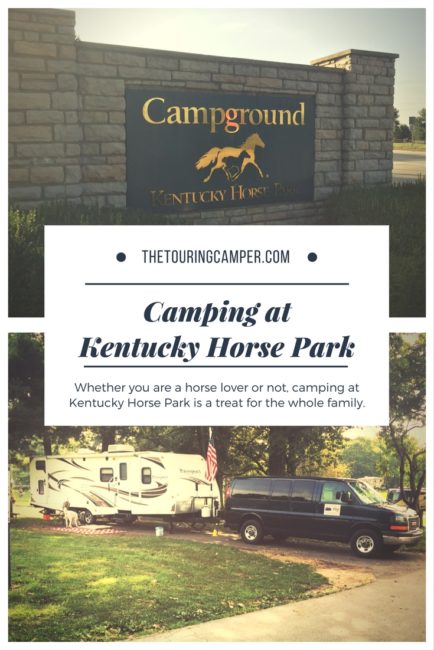 Located just a few yards from Kentucky Horse Park’s main entrance, the Kentucky Horse Park Campground welcomes you with the sprawling green hills that have come to define Kentucky’s horse country. Open year round, the campground complex is arranged in two large circular loops. The sites located on either the innermost or outermost rows of the loops offered the most space since they weren’t backing up to other sites. Most sites were positioned at 90 angles to the road, rather than a slant, which can make it a little more challenging for larger rigs to back in.

A few notes about particular sites:

Here’s a video Jarrett made of the campground to give you a better feel for the place:

Note: We had a concerned viewer leave a comment on another video about us “speeding” in the campground. Rest-assured, we aren’t speeding. 🙂 Jarrett usually bikes the campground with his film equipment but if we don’t have our bikes he will drive the speed limit (which is usually 10-15 MPH in the campground), and then later he speeds up the video so that you all can get a feel for the campground without having to sit through a painfully long tour. 🙂

The bathrooms were large and clean, although not deep cleaned (cobwebs and bugs were plentiful). But they were sufficient and the showers were hot. A few toilets weren’t working one day, but were fixed by the next.

According to our kids, Kentucky Horse Park Campground ranked as one of their favorite campgrounds because of the nice-sized pool–which I will agree felt awesome during our hot and humid August visit. The pool is lifeguarded, offers a separate kiddie pool, and is attached to a bath house. The campground also offered basketball, volleyball, and tennis courts, as well as two large playgrounds (one in each loop). The campground office included a camp store and gift shop, where you could buy things like ice and firewood. We also learned that campers can get free parking and a small discount on admission to the horse park when they purchase their tickets at the campground store. A shuttle service between the campground store and park visitors center is also available during the summer.

The shower houses had attached laundry facilities, but it appears that many of the campers used the equipment to wash their horse blankets and other gear. So it might not be the best place to do your normal laundry–unless you don’t mind some complimentary horse hair. 🙂

Although there are no full hook-up sites, there is a honey-wagon service for anyone needing a pump out.

Wi-Fi was available, and strongest when you were located near the bathrooms, which is where the Wi-Fi repeaters are located.

The huge benefit to camping at Kentucky Horse Park campground is the close proximity to the Kentucky Horse Park complex of museums, shows, and other activities. You could easily spend two days exploring the grounds and museums plus attending the various shows, so take advantage of the special ticket pricing that grants you a second day’s admission for free.

We started our day by walking the grounds and then taking a short horse-drawn trolley tour around the complex. From there we bounced from one horse show to the next. The Hall of Champions presentation featured a sampling of the site’s recognized race horses. The second show, the Parade of Breeds, introduced the audience to a sampling of horse breeds from around the world. As a narrator described the history of each horse, a mounted and costumed rider circled the rink. The final presentation of the morning demonstrated how draft horses are harnessed for work.

The next day we returned to explore the International Museum of the Horse, which is a Smithsonian affiliate. We discovered the front desk offers a little scavenger hunt for the kids, and upon completion they reward them with a button pin. The museum traces the history of the horse from ancient times to modern life. It also features a special exhibit devoted to Arabian horses, including a fun kids corner about Walter Farley’s esteemed Black Stallion series.

During our visit, the museum had a special display devoted to the 100th anniversary of legendary race horse Man o’ War. Although this display only goes through Nov. 1, 2017, visitors can always see the outdoor Man o’ War memorial where the race horse is buried.

Note: Admission to Kentucky Horse Park also includes access to the Showplace for Saddlebreds museum–but we ran out of time to explore that site.

For many families making their rounds of the Utah 5 National Parks, a visit to Bryce Canyon is a highly anticipated stop. With its sweeping vistas and spectacular hikes, Bryce offers something for everyone. But with most of the camping options concentrated immediately around Bryce, families that want to escape the crowds and explore Bryce END_OF_DOCUMENT_TOKEN_TO_BE_REPLACED

For many families planning a trip to the Utah region, their itineraries often center on hitting the high points of iconic stops like Grand Canyon, Zion, Bryce, and Arches. Several lesser-known parks are also worth the stop, though, and for families looking for ways to escape the crowds, Cedar Breaks National Monument should be on END_OF_DOCUMENT_TOKEN_TO_BE_REPLACED