Our March spring break trip could probably be summed up in three words: family, fun, and food. We relished our time with family, found lots of ways to have a ton of fun, and ate way too much good food. Jarrett and I even had time to slip away sans kiddos to explore the old city of St. Augustine–and we had so much fun that we returned a few days later with the kids. Much like our adventures in Charleston and Savannah, our visit to St. Augustine was filled with history, culture, and beauty that left us eager to return again one day. Here’s a roundup of five can’t-miss stops in beautiful St. Augustine. 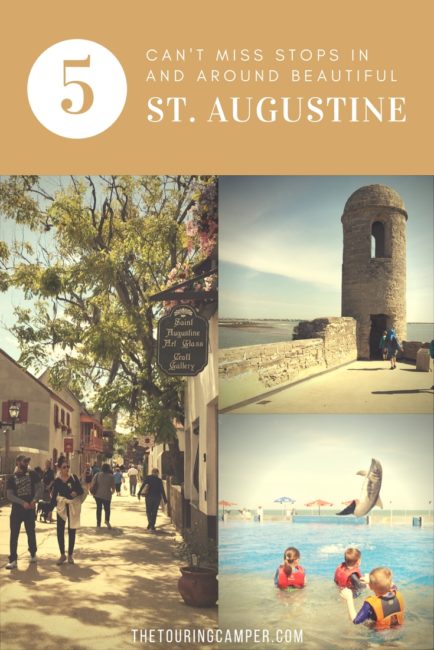 Castillo de San Marcos National Monument is North America’s oldest masonry and only surviving 17th century fort. This impressive structure was constructed from coquina, a type of limestone composed of crushed shells that was remarkably resilient to cannon attacks.

Entrance to the NPS site requires a fee of $10 for anyone 16 years or older, but since we had our fourth grader with us, it meant our whole family got in free. The kids were excited to dive into their Junior Ranger booklets, which offered an additional special patch for anyone who completed extra activities during their visit. The highlight of the stop was attending the special weapons ranger program that involved handling weapon reproductions and participating in a pseudo cannon firing. The park also features real cannon firings from the gun deck; check the NPS website for details on when these demonstrations take place. 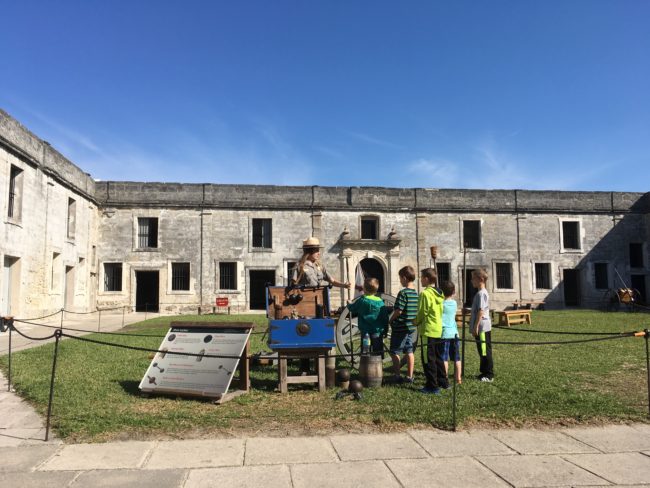 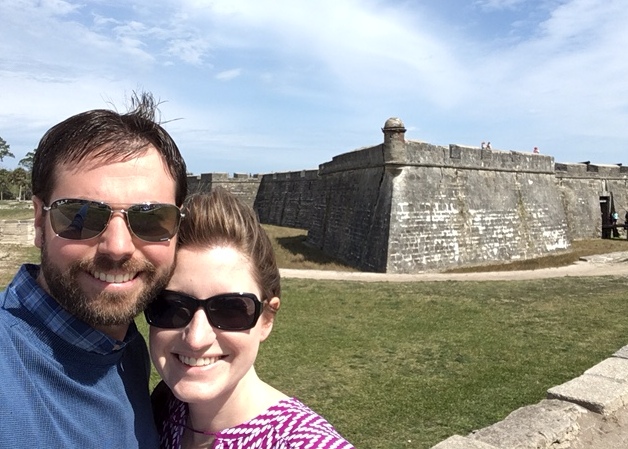 Our kids checked off a bucket-list experience with our visit to Marineland Dolphin Adventure in St. Augustine. They attended the Discover Dolphins program, which included a ~25 minute educational introduction to the center and dolphins. After changing into swimsuits and putting on a life vest (a requirement) the kids got to wade in for about 20 minutes of dolphin interaction. A trainer guided the encounter, even teaching participants some signals to get the dolphin to perform. The chance to pet, feed, and interact with a dolphin was an epic experience for them–they had the biggest grins on their faces the whole time!

A couple things to note about visiting Marineland: 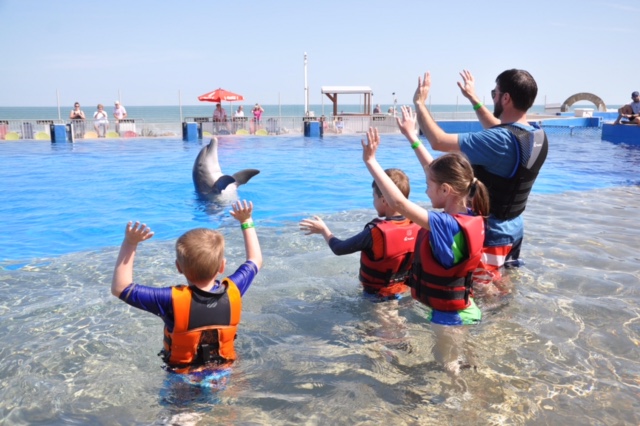 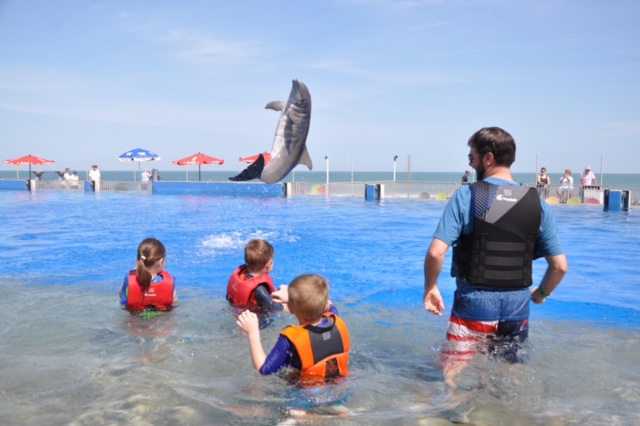 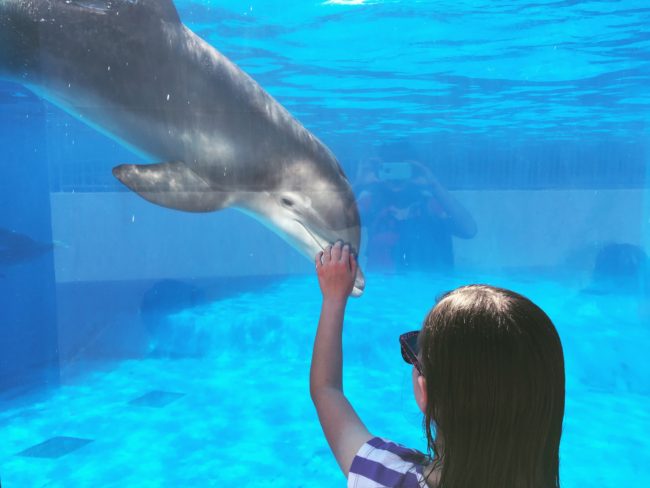 Compared to the grandeur of Castillo de San Marcos, Fort Matanzas is a more subdued experience. The day of our visit we discovered the free ferry that takes you out to the island fort was not in operation due to damages to the dock from Hurricane Matthew. So that was a bit of a letdown since the main attraction for the site is getting to go out on Rattlesnake Island–sounds appealing, right? 🙂 So in lieu of that expedition, we watched the brief video and walked down to the beach where we could see the fort. And of course the kids enjoyed completing another Junior Ranger badge. 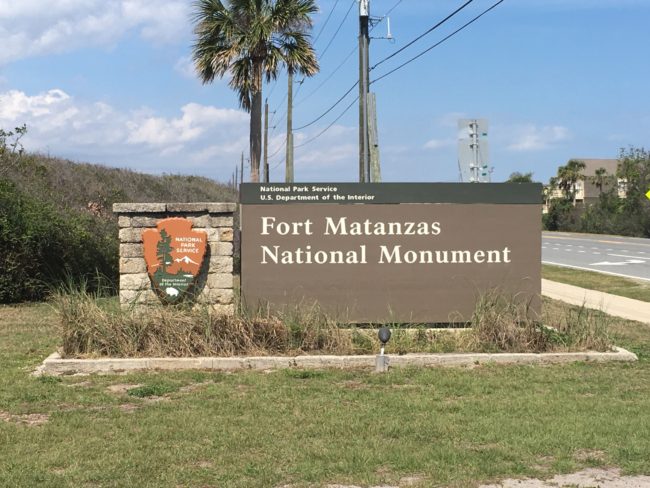 We had two absolutely gorgeous days for exploring St. Augustine on foot. And that was a good thing because the closest parking we could find the one day was at the Historic Downtown Parking Facility near the Visitor Information Center. We ended up doing quite a bit of walking because we didn’t want to move the van due to the $12 parking fee per entry. (Tip: The parking lot located in front of Castillo de San Marcos fills up fast during peak season, so if you want a spot there, you must arrive early in the morning. Otherwise it is just the luck of timing to find a spot in that lot.) 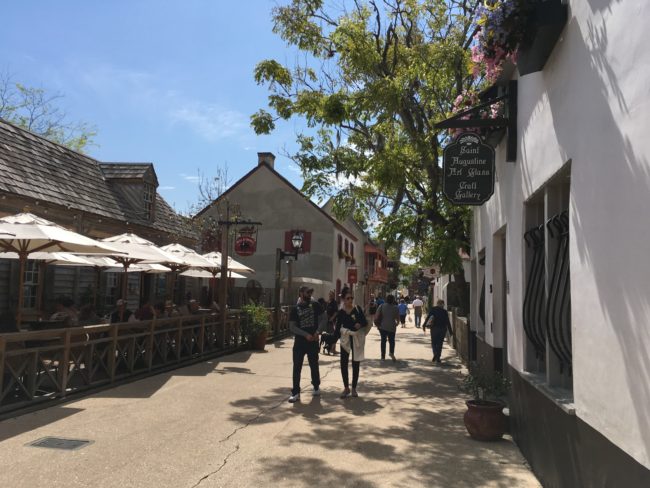 While you are on St. George Street it’s a perfect time to sample some of the local fare. Many of the restaurants post their menus outside their doors, so you can easily decide what meets your fancy. We opted for Mi Casa Cafe Beer and Wine Garden because they had special fish tacos that day. Yum! The food was good and the live outdoor music added a fun touch. After your meal you can also find a variety of ice cream parlors and fudge shops to satisfy your sweet tooth. 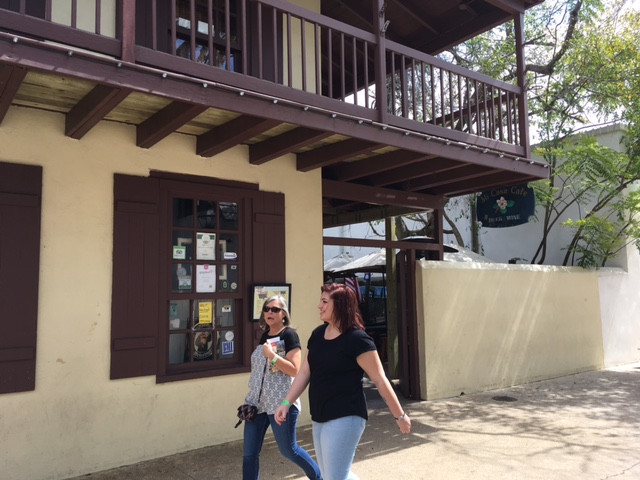 In 1750 the King of Spain commissioned the Pena-Peck House for his royal treasurer, Juan Esteban de Pena. After Spain lost Florida to Britain, though, it housed two British governors until the Peck family moved in during the 1800s. Today the Woman’s Exchange of St. Augustine runs the historic site and offers tours for a donation. You’ll get to see the Spanish influence in the first floor of the property before touring the upstairs, which features a more ante-bellum flair.

The history behind the Woman’s Exchange is also fascinating: Established in St. Augustine in 1892, the exchange was part of a nationwide movement to help women who had fallen on hard times regain economic stability. Through the exchange, women could discretely sell their hand-crafted wares and meet their financial needs. Today the exchange still operates and sells the handcrafts of more than 100 consignors. 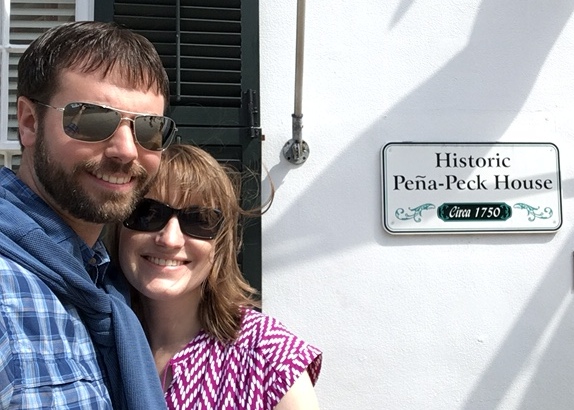 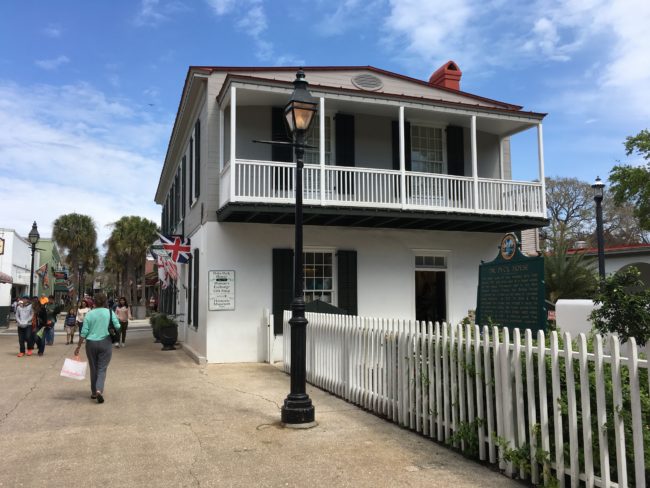 Of course there are many more places to explore in St. Augustine! We ran out of time to do any more touring, but we’ve already added visits to the Lightner Museum and Flagler College to our return trip bucket list. Are there any other places you would add?

Introducing the Campsite Spotlight!
Join the Kids to Parks movement–plus a giveaway!

For many families making their rounds of the Utah 5 National Parks, a visit to Bryce Canyon is a highly anticipated stop. With its sweeping vistas and spectacular hikes, Bryce offers something for everyone. But with most of the camping options concentrated immediately around Bryce, families that want to escape the crowds and explore Bryce END_OF_DOCUMENT_TOKEN_TO_BE_REPLACED

For many families planning a trip to the Utah region, their itineraries often center on hitting the high points of iconic stops like Grand Canyon, Zion, Bryce, and Arches. Several lesser-known parks are also worth the stop, though, and for families looking for ways to escape the crowds, Cedar Breaks National Monument should be on END_OF_DOCUMENT_TOKEN_TO_BE_REPLACED