On our way home from our winter Texas adventure, my typically Type-A planner wife caught me off-guard when she suggested we change things up a bit and make one last stop on our way home to Pennsylvania. She had seen the signs for Mammoth Cave National Park on our way through Kentucky a few weeks earlier and she thought the kids would jump at the chance to visit one more national park before we headed home.

So we googled campgrounds near Mammoth Cave, and found Singing Hills RV Park in Cave City, Ky., which offered full hook-ups with close proximity to the national park. The benefit to traveling through certain parts of the country in the winter is that even on short notice, the campground owners were able to accommodate us! It seemed fitting that after pulling this Texas trip together on the fly, we would end it on the fly as well. 🙂 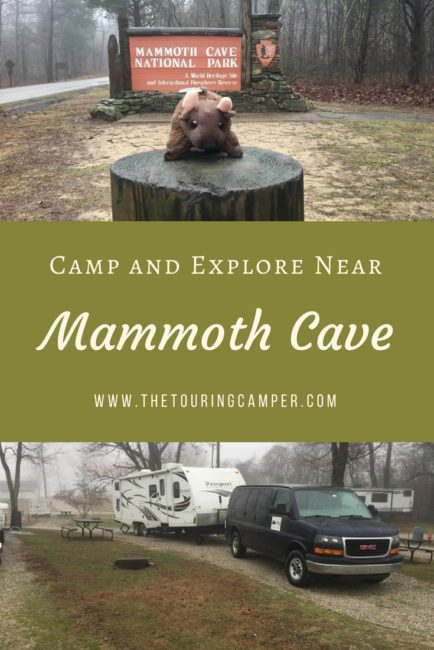 Campground: Singing Hills RV park is a fairly small campground. Like many other places we have stayed, it has features where it shines and a few areas to evaluate based on your camping preferences.

The positives are as follows:

Some things to note:

Bathrooms: Thankfully the sites offered full hook-up since the bathrooms were not quite up to Kristin’s standards.

Touring: We visited in the off-season so most roadside attractions were still closed, but there would be a lot to see and do during the in-season. The main purpose for our stop was to visit Mammoth Cave National Park, which is the world’s longest known cave system, with more than 400 miles explored and more caves discovered all the time. Did you know that Mammoth Cave is also one of the World Heritage Sites in the U.S.? Such sites are deemed to have “universal value” and have met certain criteria.

This NPS site offers numerous cave tours that vary in length and difficulty. It’s very important to understand the scope and extent of each tour before determining which one will be a good fit for your family. The park rangers are really good at describing what the tours will be like: Before we even boarded the bus, our tour ranger spent about 10 minutes explaining what the tour would involve and emphasizing who should probably not go on this tour (such as people who had recent knee replacements or heart attacks, or struggle with heights and claustrophobia.).

We went with the Domes and Dripstones tour, which included 280 steps and some tight spaces! At first Kristin was a bit concerned about whether the kids could handle it, but they did great. The tour included views of the Frozen Niagara formation, underground canyons, dripstones, and more. Since you are essentially walking single-file through the cave passages, it’s impossible to hear the park ranger through much of the cave. But at two different points the tour group stops to sit on benches while the ranger talks about the cave system. Toward the end of the tour, the kids were thrilled to spot the cave crickets.

In addition to the cave tour, we also spent time exploring the visitor center’s awesome exhibits. The renovated facility opened in 2012 and features lots of engaging and informative displays that will appeal to adults and children alike. While we were there the kids also had the opportunity to complete another Junior Ranger Badge.

So our last-minute plans to visit Mammoth were a win! Here’s to more spur-of-the-moment detours in the future. 🙂

5+ Can’t Miss Stops in Waco, Texas
One thing to get your kids outside more

For many families making their rounds of the Utah 5 National Parks, a visit to Bryce Canyon is a highly anticipated stop. With its sweeping vistas and spectacular hikes, Bryce offers something for everyone. But with most of the camping options concentrated immediately around Bryce, families that want to escape the crowds and explore Bryce END_OF_DOCUMENT_TOKEN_TO_BE_REPLACED

For many families planning a trip to the Utah region, their itineraries often center on hitting the high points of iconic stops like Grand Canyon, Zion, Bryce, and Arches. Several lesser-known parks are also worth the stop, though, and for families looking for ways to escape the crowds, Cedar Breaks National Monument should be on END_OF_DOCUMENT_TOKEN_TO_BE_REPLACED