Last year when Jarrett and I plotted out our (very) early summer RV adventure, we knew our family would be growing by four paws at the beginning of the new year. However, Resa (which means to travel in Swedish) and her littermates arrived much later than even the breeder had expected, which meant we brought a new puppy home just five weeks before we left on a three-week trip in May. Ack! So much for planning!

As we packed for our trip and made last-minute preparations, we were a bit nervous about how our squirming ball of fur was going to handle life on the road. There were a number of moments when I wondered whether taking a 13-week-old puppy on the road might just be the. worst. idea. ever. Those concerns were not quickly assuaged, either, since the start of the trip was plagued by Resa’s extreme carsickness.

But by the end of the trip, I came to the conclusion that bringing Resa along may have been the. best. idea. ever. In three weeks she learned how to do car rides like a champ. She followed Olive’s lead on how to wait quietly in the car even when we weren’t in it. She was a model of perfection chilling out under a Chick-Fil-A outdoor dining table while the rest of us ate more chicken. She conquered the camper steps although they terrified her at first. And she even got to the point that she no longer threw up every time she rode in the car. So after three weeks on the road I think it’s safe to say Resa is ready for more adventures in the future. Which is a good thing, because we’re already plotting them! 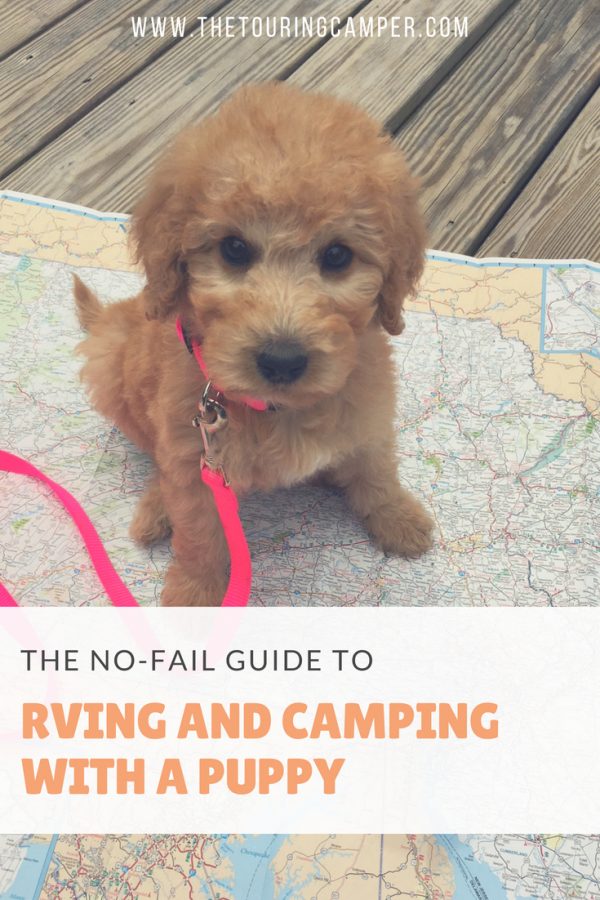 Note: This post contains affiliate links. If you make a purchase through one of these links, we will receive a small commission at no additional cost to you. Thank you for supporting The Touring Camper!

An RV adventure during the early months of a puppy’s life can be a wonderful way to introduce the new family dog to your camping lifestyle. Dog trainers recommend exposing puppies to lots of people and places to create a well-socialized dog–and campgrounds are ripe with opportunities! Taking a puppy on the road for several weeks, though, is not without its challenges. So here are 10 tips to help you survive your puppy’s first RVing adventure!

Before taking a puppy on the road, consider discussing with your vet what precautions you should take for the health and well-being of your young dog. Many vets recommend that you avoid exposing puppies younger than 12 weeks to any public places (like dog parks) where they might come in contact with unvaccinated or sick dogs. For this reason it might be wise to delay your trip until your puppy has reached at least the 12th week and received all of his/her initial vaccines including the rabies shot. Many campgrounds now want campers to show proof that their dog has received the rabies vaccination, so make sure you bring your pup’s vaccine record with you on your trip.

Have a roll of paper towel, baby wipes, small trash bags (like plastic shopping bags), and a nontoxic cleaner in the car to clean up any accidents or car sickness. This is especially important if you have a puppy prone to car sickness like our Resa was on her first big trip. At the beginning of our three-week trip, we had to pull over about once every 45 minutes to clean up a mess. We tried using puppy piddle pads to contain the mess, and sometimes that worked great, but usually she got sick off of the mat. The baby wipes were helpful for cleaning her up if needed.

After that rough first drive-day, we decided to postpone feeding Resa her morning breakfast on any days we were going to be traveling in the morning. Once we arrived at our destination we would then feed her and this seemed to reduce how often she got carsick, although it didn’t completely prevent it. (We also tried the vet’s recommendation of giving her dramamine, but that didn’t help either.) Some of our wonderful followers over on Facebook and Instagram suggested using a battery-operated fan to blow on her crate while driving: We were going to pick one up, but she started doing better in the car and we didn’t end up needing it, although it was a great idea! 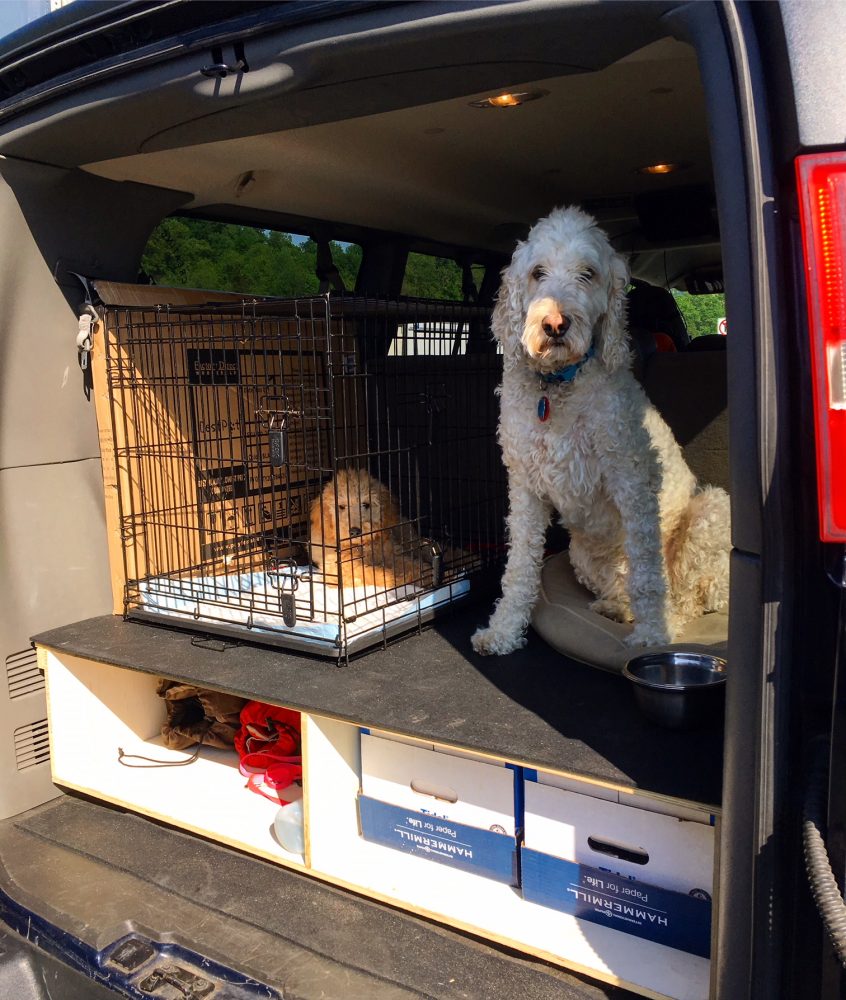 Bring extra dog bedding in case you can’t do laundry after a puppy accident. Old towels or small blankets work great. I cut a large blanket into six pieces so that I would have plenty of bedding backups. And since I had that extra bedding, I didn’t feel bad about having to pitch one piece when it got toasted during part of the trip that we didn’t have easy access to laundry facilities.

Bring everything you need to bathe the puppy because it’s likely he/she will get into something at some point on the trip. (Not that we have any experience with that–ahem.) Thankfully we were still able to fit Resa in the camper bathtub and give her a quick scrub down a few times on the trip. Since she doesn’t shed we didn’t need to worry about her dog hair clogging our RV drain pipes. I’m not sure whether I would bathe a shedding dog in the camper (anyone have thoughts on this?) but at some campgrounds you might be able to bathe the dog at your site using your RV’s outside shower hose (during the warm summer months at least). We’ve also found many locations on our trips offer indoor dog washing stations where you pay a few dollars to get your pup all cleaned up. 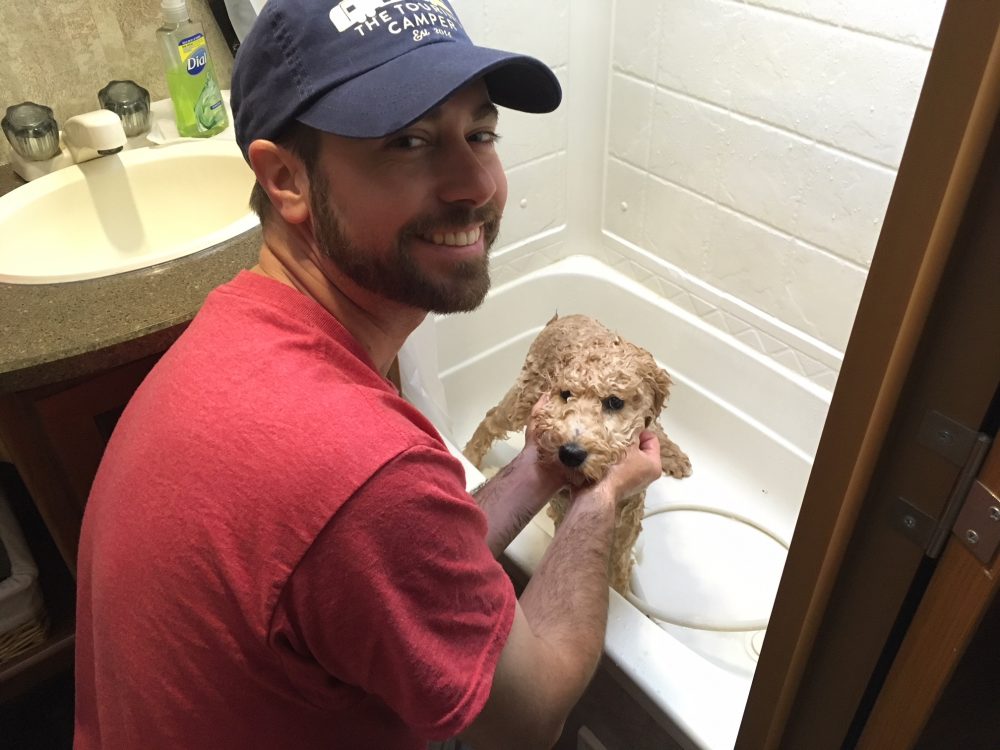 If you are crate training, it works really well to have one crate in the tow vehicle and another one in the camper. It saved us a lot of hassle from dragging the crate back and forth between the camper and van. We had to do some careful measuring, though, to find a crate that would fit in our camper and still be big enough for Resa. It’s a good thing we took the trip when we did, because by the end of the summer she would no longer have fit in this crate! 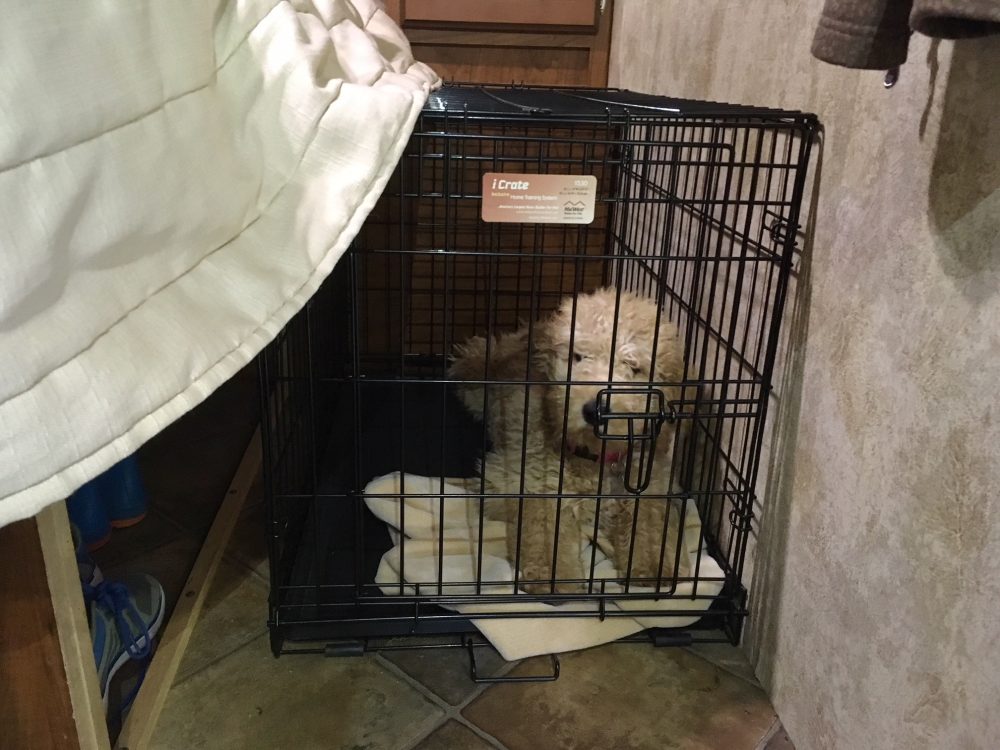 Bring an xpen with you. This little pen was key to keeping Resa safe while giving her plenty of room to play in close proximity to us. The kids could even get in the pen with her to play or pet her. Added bonus: If she had a puppy accident, it happened outside. 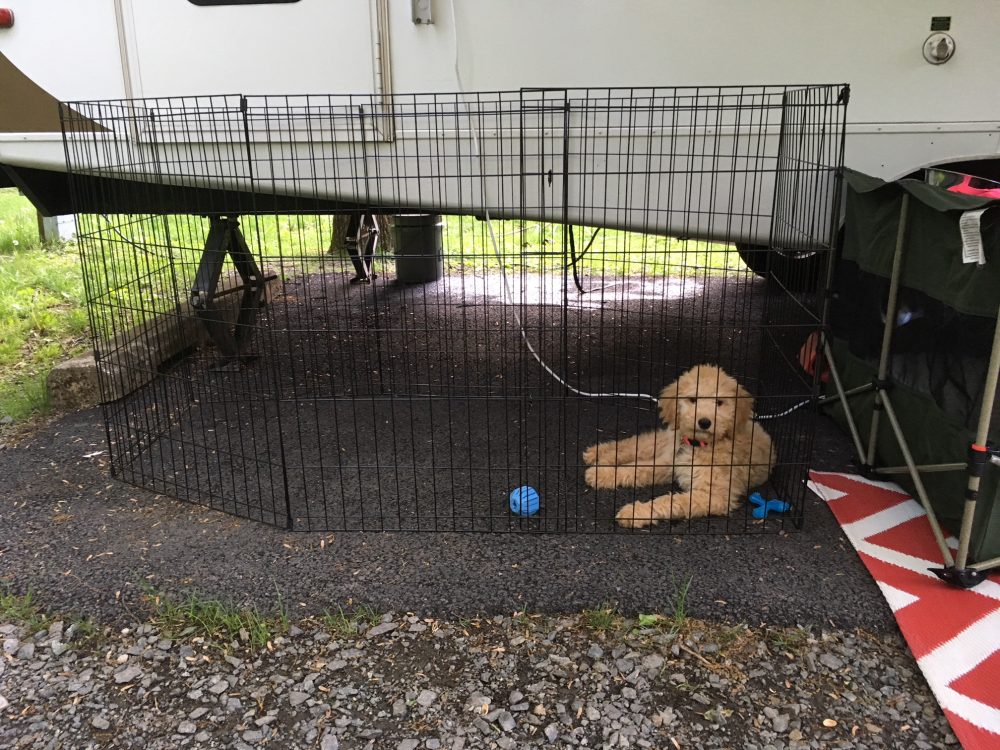 Be consistent with housebreaking strategies. You don’t want your RV trip to interrupt all the progress you’ve made so far with housebreaking your puppy. So just keep doing what you’ve been doing at home, even while you’re living out of the RV.

Even if you microchip your puppy, you should still have an ID tag made for him/her with your cell phone number, not your home phone number, on it. In the event your puppy gets separated from you while you are traveling, the home phone number won’t make it easy for someone to get in contact with you if they find your missing pet. I like to list both of our cell numbers on the dog ID tag just in case someone couldn’t get through to us on one of the cells.

Also consider getting some of those disposable key tags. At each campground you stay at, write your campsite number on a new tag and attach it to the puppy’s collar. If your dog breaks lose, another camper will know where to return him/her.

Bring enough of your puppy’s food to last the whole trip (plus a little extra in case of accidental spills–ask me how I know). Puppies digestive systems tend to be more sensitive to sudden changes in their diet, and it might be problematic if you ran out of food and then couldn’t find the same product. 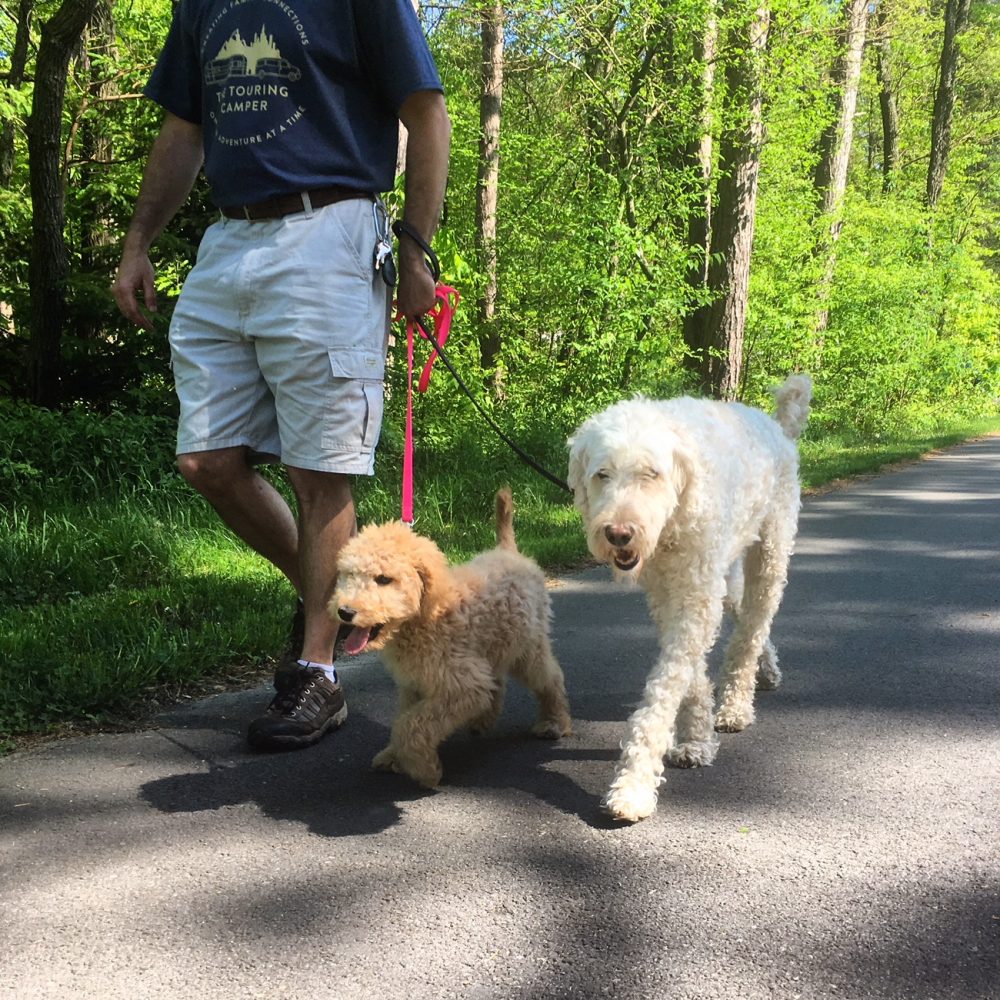 The content of TheTouringCamper.com is intended for entertainment and information use only and is not to be construed as providing professional advice. Our full disclosure policy can be found here.

For many families making their rounds of the Utah 5 National Parks, a visit to Bryce Canyon is a highly anticipated stop. With its sweeping vistas and spectacular hikes, Bryce offers something for everyone. But with most of the camping options concentrated immediately around Bryce, families that want to escape the crowds and explore Bryce END_OF_DOCUMENT_TOKEN_TO_BE_REPLACED

For many families planning a trip to the Utah region, their itineraries often center on hitting the high points of iconic stops like Grand Canyon, Zion, Bryce, and Arches. Several lesser-known parks are also worth the stop, though, and for families looking for ways to escape the crowds, Cedar Breaks National Monument should be on END_OF_DOCUMENT_TOKEN_TO_BE_REPLACED