Tires and brakes are a vital part of any camper. They are what make constant contact with the road as you are rolling down the highway. If these are not working properly the chances that you are going to encounter an unsafe situation exponentially increases. That is why I always check tire pressures and condition as we are hauling the camper. I check the tire pressure each day when cold and then inspect tires for bulges or wear spots each time I fill up with gas. My dad (a professional UPS Driver) always impressed upon me the importance of monitoring the condition of tires, and thus I have always been a bit crazy about having a good set of tires and keeping them well-maintained. So before our big West trip in 2015, we put new tires on the camper. But by the beginning of the 2016 camping season, after only 8,000 miles in 2015, the rear camper tires were completely bald on the inner edges. And I’m talking frighteningly bald: 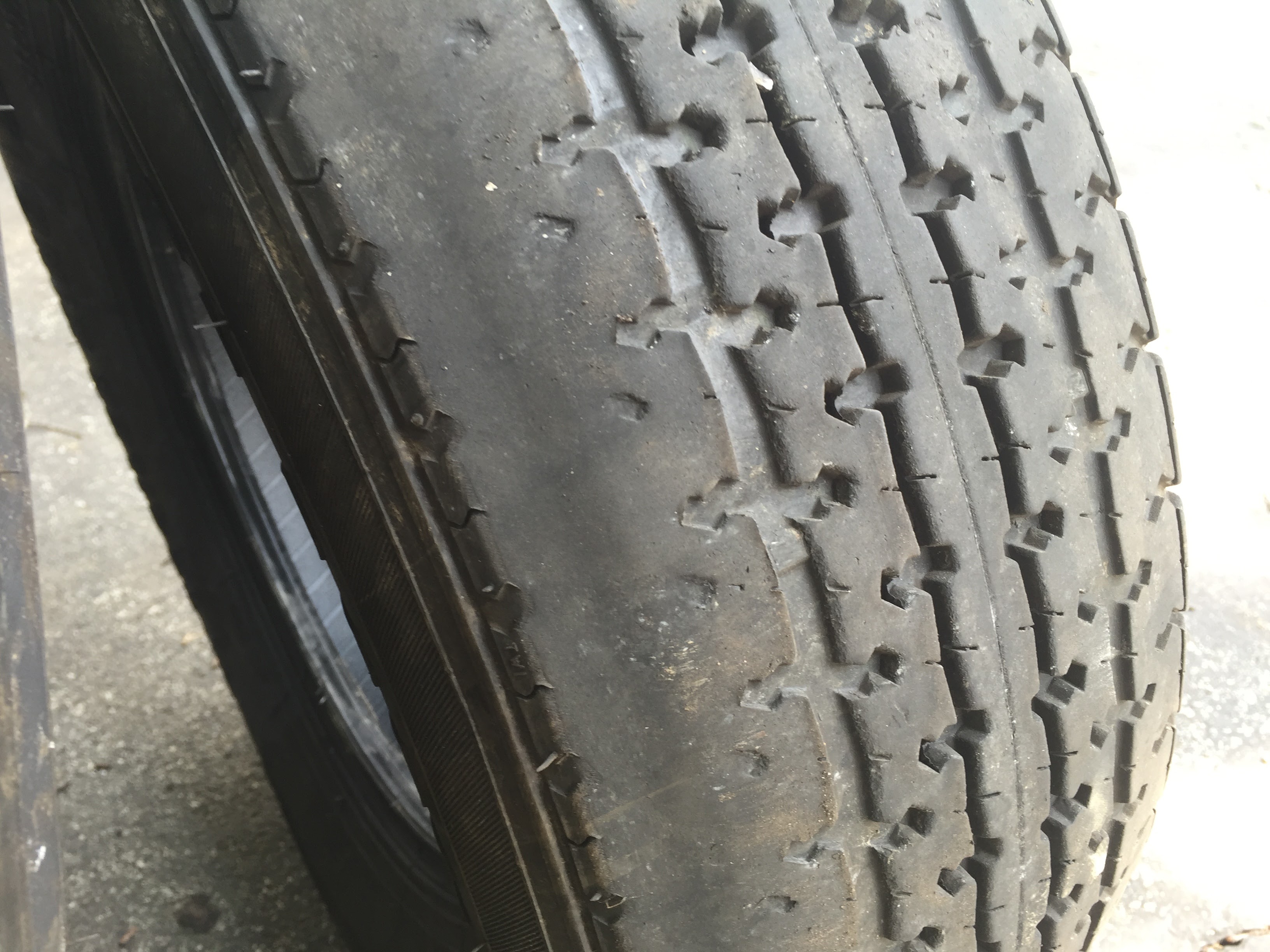 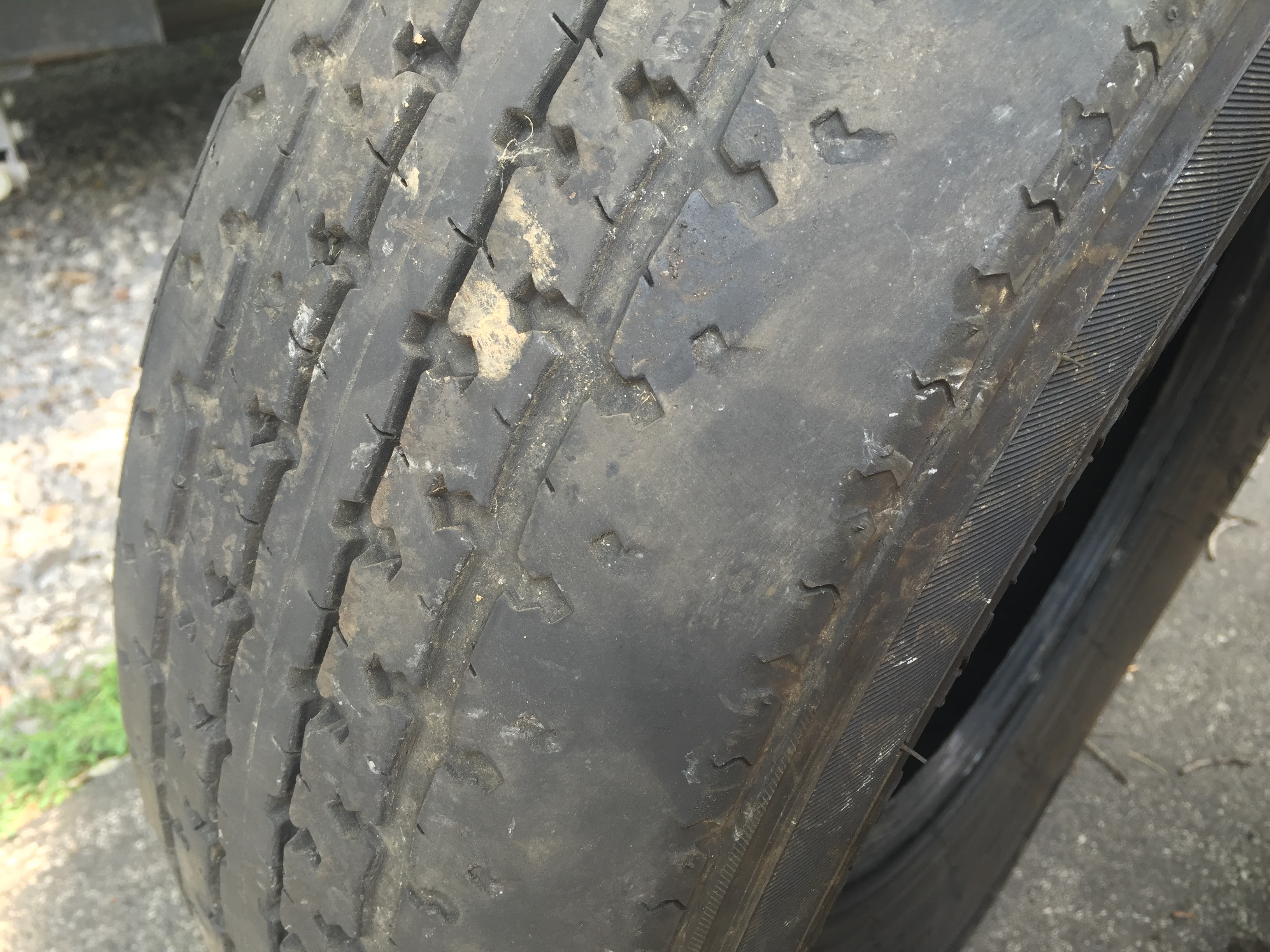 Thus there was no doubt we needed two new tires installed for the 2016 season. While we did not do as many miles in 2016 (around 5,000) I noticed this fall that there was still significant tire wear so I began to do some research. Since we have a Keystone Passport that has the “wide axles” (or sometimes called spread axles) I was growing suspicious that they were not in alignment. From what I was reading in RV forums, people with the spread axles were chewing through rear tires, especially if a camper axle was not aligned.

So when we learned that we were headed to Texas, which is more than 3,000 miles round-trip, I knew that I had to have a qualified dealer look at the camper and get her road-worthy. So I reached out to Boyer RV in Erie, Pa., and Service Manager Dan Boyer made arrangements for me to bring the camper in for work under lead technician, Brian. Both Dan and Brian were great to work with and they spent the better part of a morning not only diagnosing the problem but answering my plethora of questions so that I could pass along what I learned. So I will give you the short version and then the longer version with all the details, pictures, diagrams, and videos. 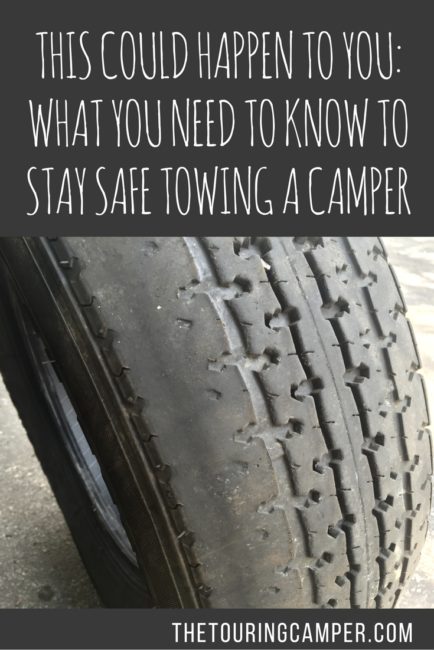 Both axles were out of alignment because they were bent and needed to be replaced!

Here are all the nitty-gritty details! Starting off with a video:

8:00 a.m.: Boyer RV opened for the day and I met with Sarah, one of the service managers, to get checked-in.

8:10 a.m.: I met up with Brian and as soon as he saw the old tires and looked at the axles he knew something was significantly wrong and suspected that the axles were bent. Here is where I started to ask some questions about what might cause this type of problem. Brian walked me to the max weight sticker on the camper and showed me that each axle is a 3,500 poud capacity (thus 7,000 pound total) but the camper is allowed to have 7,200 pound total capacity. Brian said the extra 200 pounds is transferred to the tow vehicle. This is a major benefit of the spread axle design that allows the weight of the camper to be more evenly distributed. However, this is also where the problems begin. Brian shared that there are two major issues with spread axles at this weight rating:

8:30 a.m.: Brian pulled the camper into his shop and got it up on jacks. We soon discovered that the suspension components were experiencing excess wear. We learned this by pushing in and out on the tires and watching the amount of excess play in the spring components. This was another sign that something was not right.

As Brian began to take the wheels and tires off he used a small battery to “lock up” the brakes. This is where we ran into the next issue. Even though the brakes were locked, one of the wheels would keep spinning and two others would spin way more than they should. Brian said each tire should only spin about 2-3 inches and no more.

I asked what causes this and what you should do, and Brian shared two things:

9:30 a.m.: Next it was time to take measurements to determine what was wrong with the axles. This a pretty complex process that involves measuring in many different directions to determine if the axles are square with themselves, each other, and the entire trailer. Below is a picture of Brian starting the process and the diagram of all the measurements. Then I will follow it with a video explaining the different issues that could be present. After the video will be some more definitions. 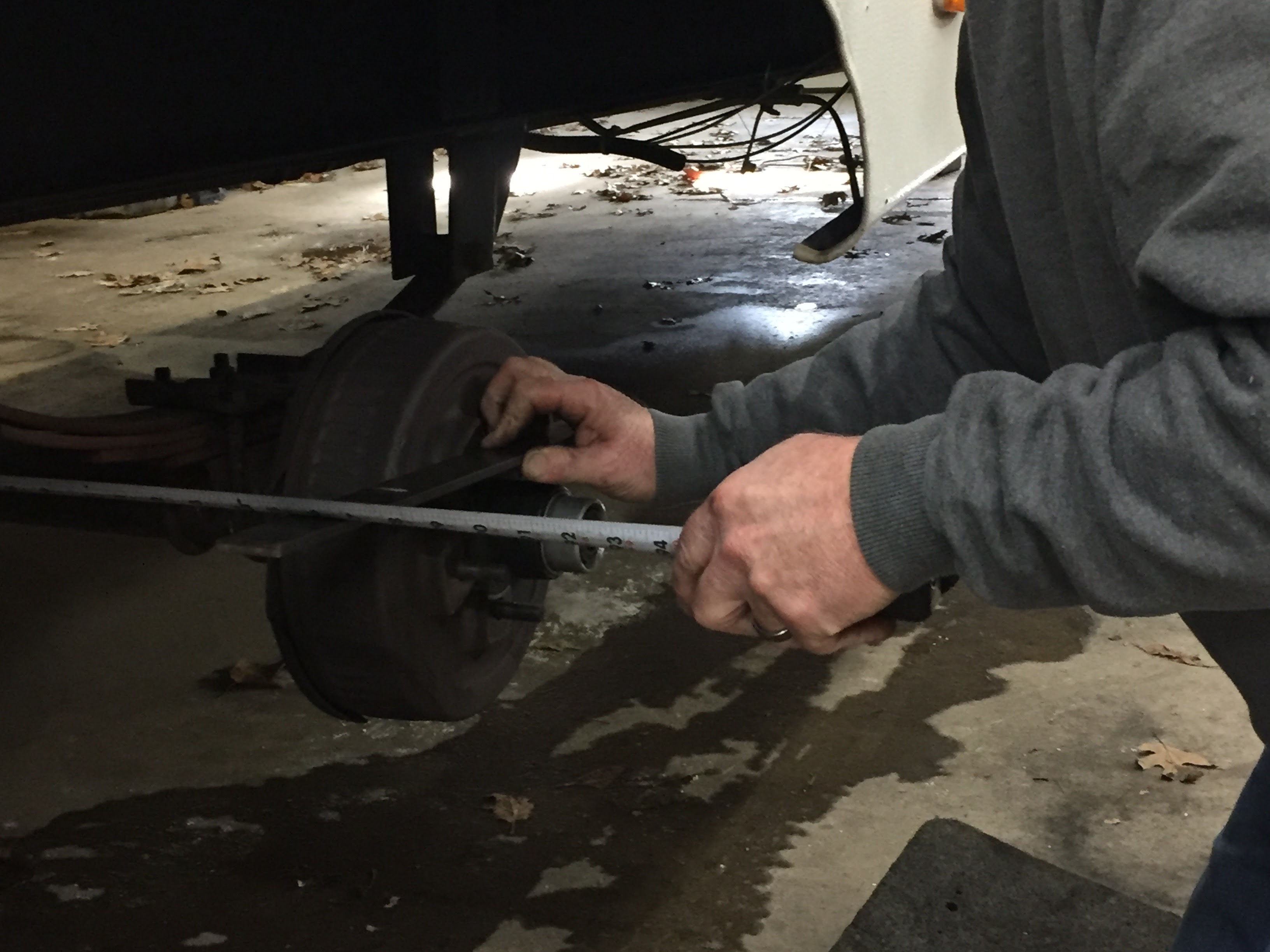 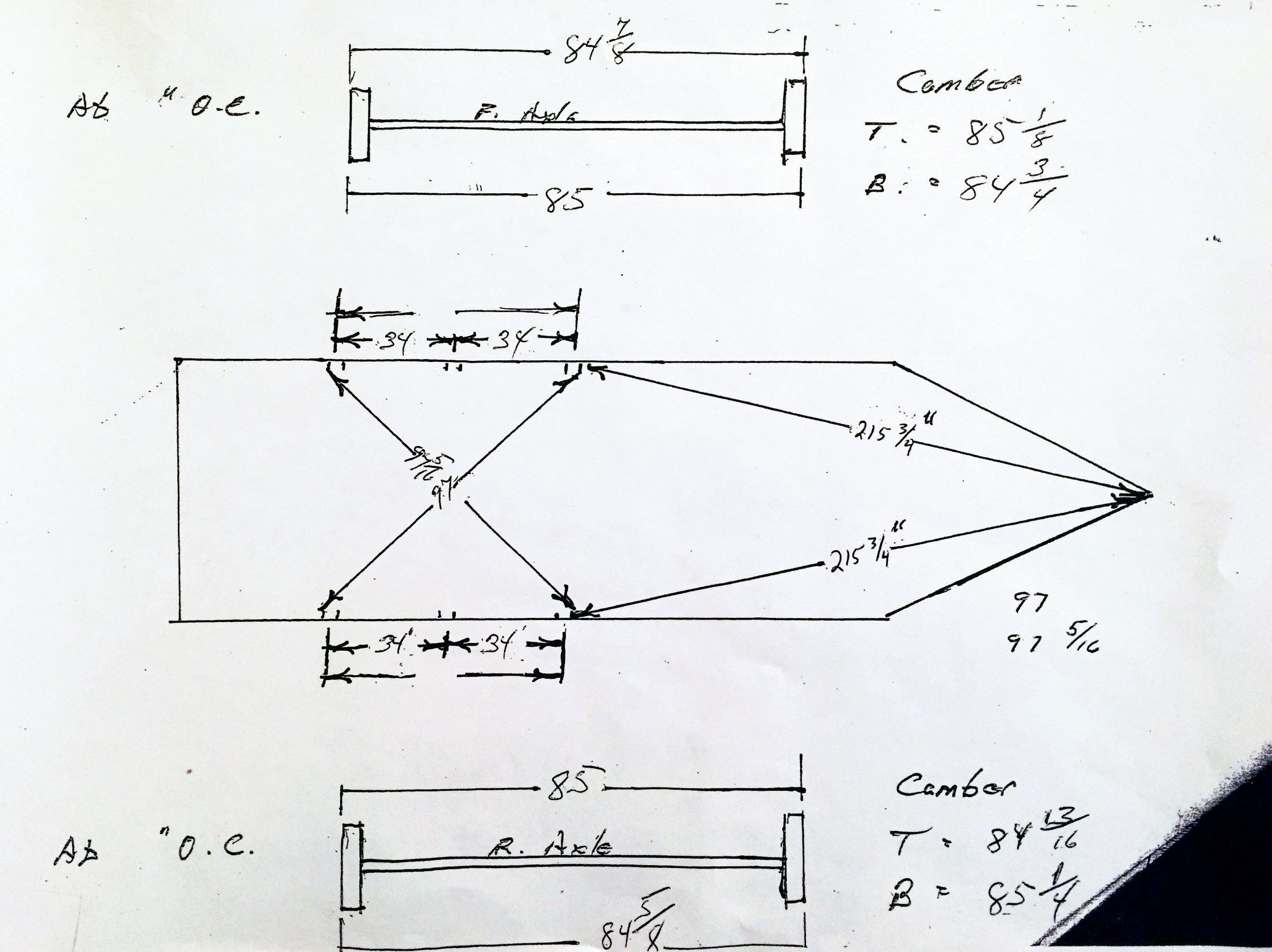 10:15 a.m: After determining the axles were damaged, Brian worked on options to get the camper rolling again. While he did that, I spent some time with Scott in the sales department dreaming about making other changes. 🙂

Scott showed me a Grand Designs Imagine 3150BH. I am very impressed with the build quality of Grand Designs, but with better construction comes added weight. Although the 3150BH is within our tow limits, it’s just barely. Scott worked up some prices that were very appealing but unfortunately for now, that beautiful 3150BH will have to stay in Erie for another family to enjoy.

11:00 a.m.: Brian and I sat down to talk through the options for getting our camper back on the road.

Option 3: Replace the current 3,500 pound axles with new MOR/ryde independent suspension axles, new wheels, and new tires. But since this option is significantly more, we didn’t even talk price. (A definite no.)

We decided–due to the number of other issues that we have had with this camper and our hope to upgrade to another one in the next few years–to go with Option 1 since we would not get a return on our dollar with Option 2 or 3 at the time of trade-in.

11:30 a.m.: Brian took a few more measurements and ordered the parts. He hopes that they will be in in the next two weeks so we can have enough time to pack for our big trip to Texas. Keeping our fingers crossed!

If you have more questions, please leave a comment and I will do my best to answer them. Also if you have had similar experiences with problematic axles, we would love to hear about it in the comments section as well.

Sleep smart and simple on the go
Favorite Things: November 2016

For many families making their rounds of the Utah 5 National Parks, a visit to Bryce Canyon is a highly anticipated stop. With its sweeping vistas and spectacular hikes, Bryce offers something for everyone. But with most of the camping options concentrated immediately around Bryce, families that want to escape the crowds and explore Bryce END_OF_DOCUMENT_TOKEN_TO_BE_REPLACED

For many families planning a trip to the Utah region, their itineraries often center on hitting the high points of iconic stops like Grand Canyon, Zion, Bryce, and Arches. Several lesser-known parks are also worth the stop, though, and for families looking for ways to escape the crowds, Cedar Breaks National Monument should be on END_OF_DOCUMENT_TOKEN_TO_BE_REPLACED