One of the things I hear frequently is, “My _________ doesn’t want to go camping. How did Jarrett convince you to try it out?” They know I did not come from a camping family. As a kid we stayed in hotels or rented beach houses for our vacations. My dad and brother went on scouting camping trips, but their stories of sly skunks and creaky cots were enough to turn the rest of the family off to the idea. 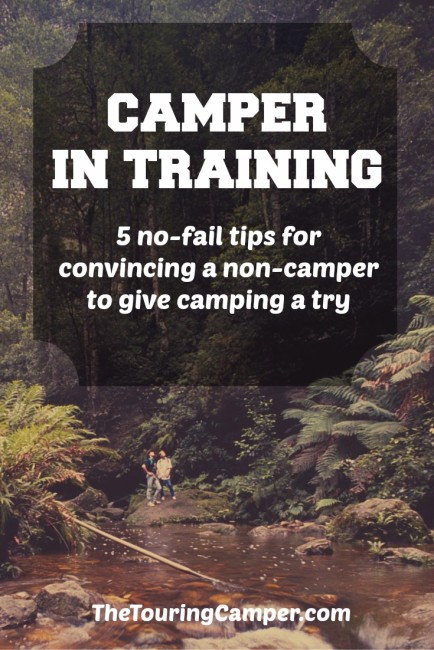 So when I learned as a smitten co-ed that Jarrett loved backpacking and camping, I was pretty sure this was one hobby we would not embrace together. But Jarrett was hopeful–maybe idealistic–and made it his mission to equip me with the type of outdoor equipment that would be necessary for a positive experience in the great outdoors. So there were hiking boots for Christmas one year. (Yeah, I know: So romantic. :)) A head lamp. SmartWool hiking socks. Even his mom got in on the theme with gifts like hiking shorts, Nalgene water bottles, Under Armour long underwear, etc.

But all the fun gear couldn’t overcome that tent camping was not my thing. Except for that one summer when my dad and I flew–yes, we flew on an airplane with tents, sleeping bags, etc., all packed in suitcases–to Williamsburg, Va., to visit Jarrett at the Boy Scout camp where he was working that summer. And it was at this point my father was convinced I had fallen head over heels in love, because his daughter was actually sleeping in a tent. On the hard ground. Covered in mosquito bites.

So like many of the things I never envisioned myself doing, marriage had a way of changing things. And a little pop-up camper certainly helped. Ah, yes, our first camper: the smallest Rockwood on the market at the time. It was so light Jarrett could actually pull it behind his Honda Accord. It was tiny–and very basic–but it became the bridge between Jarrett’s love of backpacking/tent camping and my aversion to the whole idea. And marriage is all about compromise after all. 🙂 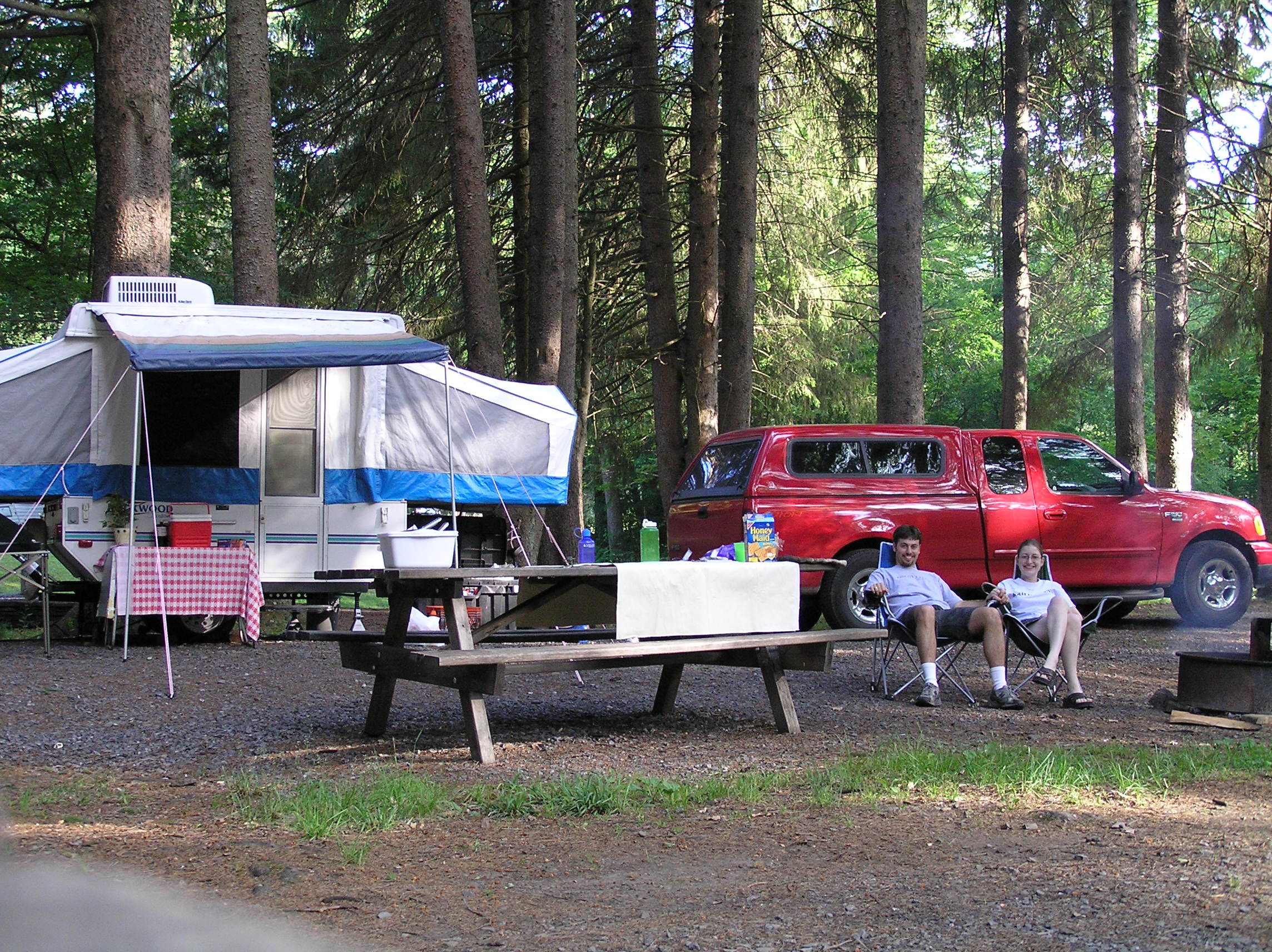 So as newlyweds with our little pop up in tow we started out on the great adventure of camping. At first I was not enamored with the bathrooms at some of the campgrounds we visited. Call me high maintenance, but it just didn’t feel like vacation to me when I had to rough it. That all changed, though, when we spent a week at Pennsylvania’s Ole Bull State Park. After arriving at the campground I scooted off to investigate the bathrooms and was delighted to discover they had just been remodeled. After Jarrett saw how nice and new they were, he declared that I was going to be forever spoiled because he had never (in all his years of camping) seen such nice state park campground bathrooms. He was right of course, because I still tend to compare bathrooms to Ole Bull and other Pennsylvania state parks with equally fantastic accommodations. 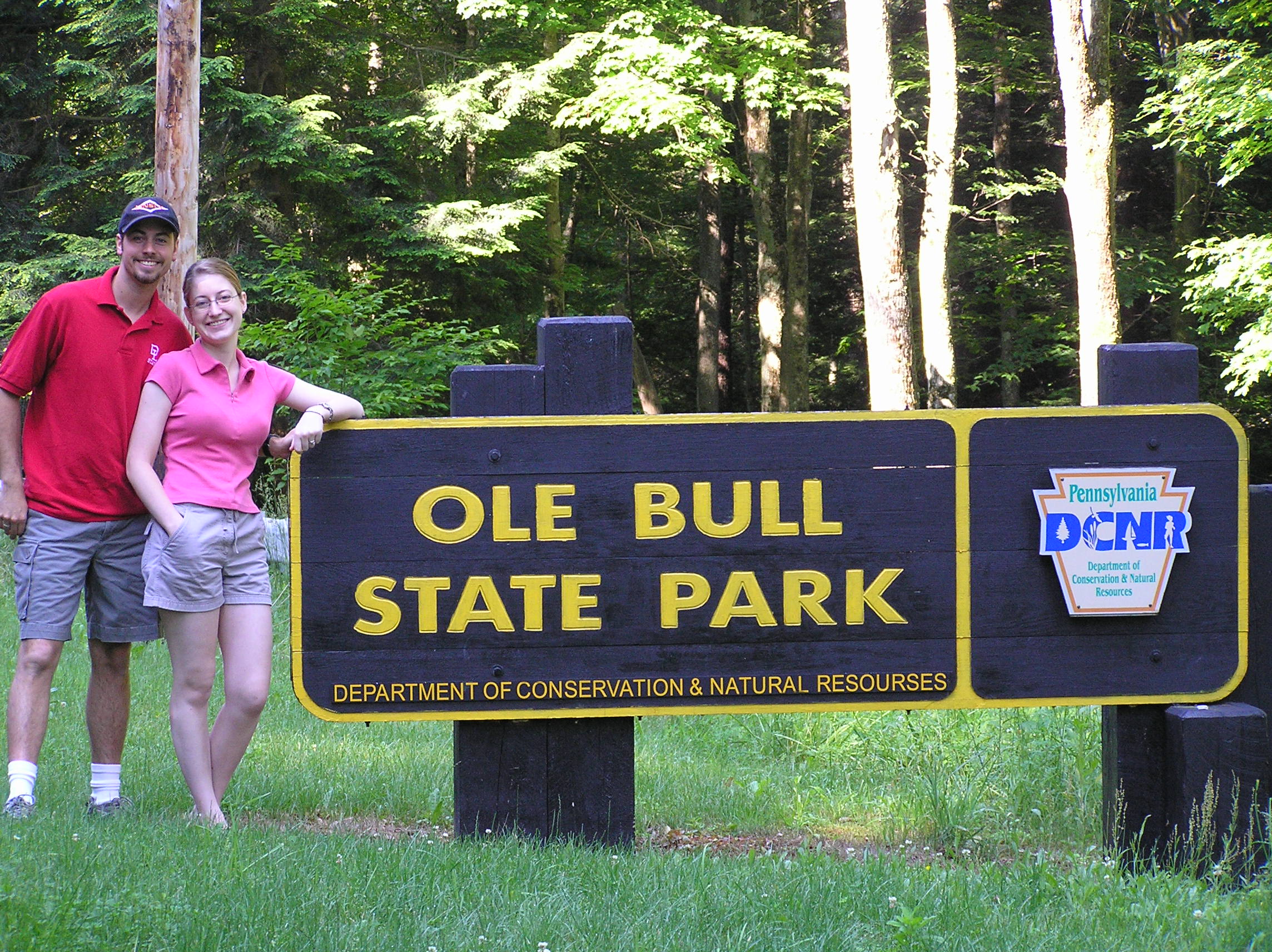 Aside from the bathrooms, though, we had a lot of fun touring the local area and exploring the deep forests that week. The trip to Ole Bull did a lot to endear me to camping. Even though not all of our future camping trips were stellar, each trip got easier for this camping gal and eventually camping became something I did because I enjoyed it too, not just because it was something Jarrett wanted to do.

But by now you’re probably thinking, “Ok, Kristin, that was a great little history lesson on how you grew to love camping, but how do I get my _______ to even try camping?” Good question. And here are my 5 tips for getting a non-camper to give camping a try:

Bonus tip: If you are pondering whether to buy a camper, but don’t want to make the investment until you know your camper-in-training will be on board, consider borrowing or renting a camper for a few short trips.

If you are used to roughing it while camping, some of my suggestions may seem too much like glamping. But when it comes to campers-in-training, you are going to have to embrace compromise–especially in the beginning. Once a camping newbie has experienced an enjoyable trip or two, you can start peeling back on the glamping side of things and see how things go. Or like Jarrett and I found, you may just have to meet in the middle.

The camping season has winded down across many parts of the U.S. and elsewhere as colder temperatures make way for winter. But if you are trying to get a non-camper on board for a trip next summer, now’s the time to start planning! For more tips to plan a great camping trip, see our planning section, including this post on how we pick a great spot to camp.

For many families making their rounds of the Utah 5 National Parks, a visit to Bryce Canyon is a highly anticipated stop. With its sweeping vistas and spectacular hikes, Bryce offers something for everyone. But with most of the camping options concentrated immediately around Bryce, families that want to escape the crowds and explore Bryce END_OF_DOCUMENT_TOKEN_TO_BE_REPLACED

For many families planning a trip to the Utah region, their itineraries often center on hitting the high points of iconic stops like Grand Canyon, Zion, Bryce, and Arches. Several lesser-known parks are also worth the stop, though, and for families looking for ways to escape the crowds, Cedar Breaks National Monument should be on END_OF_DOCUMENT_TOKEN_TO_BE_REPLACED