Spring has sprung, and I know many of you in the North are counting down the weekends until you can pull those sleepy campers from their long winter’s rest and hit the road again. As you get ready for the camping season by organizing the camper and loading things back in, here’s some important information to keep in mind so you don’t inadvertently overload your camper.

In our earlier Camper in Training post on selecting a camper I talked about the importance of knowing how much your vehicle can tow in order to select the right sized camper. In that post I talked about the fact that many people carry far more in their campers than they think. Kristin and I have long wondered just how much gear weight we are loading into our camper, so at the start of our last camping trip we stopped at a CAT Scales to find out whether we have been overloading our camper! 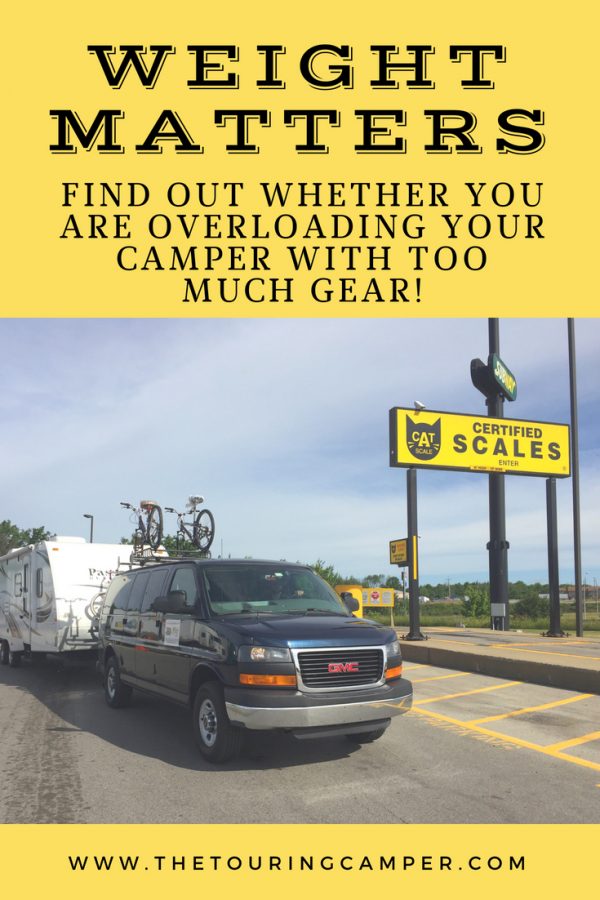 It is important to know how much weight you are towing so that you can be confident you are safely rolling down the highway. I was pretty confident that we were hauling more weight than what several dealers at RV shows have tried to convince me of, but I did not know the exact amount. We thought this would be a good time to do a weigh-in since we were loaded for a two-week trip with food, clothes, bikes, and other gear. We realized after the fact that there was still a bit of water left in the freshwater tank (probably around eight to 10 gallons) from our last campout; additionally both propane tanks were only about 1/2 full. We first located a CAT Scales that was along our intended route so we didn’t have to do any extra driving. Before I started the weigh-in process, I stopped in the office area to talk to the scale operator and explained that I needed to do a “double weigh”: First weighing the whole rig (van and camper), then weighing just the van. This double weigh cost us a total of $12.50 ($10.50 for the first weigh and $2.00 for the second).

After explaining what I needed to do, we drove the van and camper up on the scale. The first weigh was the Gross Combined Weight.

Note: Some scales will allow you to have your tow vehicle on one scale and trailer on another thus doing a single weigh. However, since many people tow with an equalizer hitch you will not get the most accurate picture. Thus, I highly suggest unhooking and then just weighing your tow vehicle.

After completing the first weigh, we located a safe place to unhitch the camper. Then we drove our van back onto the scales and let the scale operator know it was our second weigh. This weight was the Gross Tow Vehicle Weight.

Note: Make sure that you have the same people, etc., in the vehicle both times or it will throw your numbers off.

After that we were ready to hook back up with the camper. While I was doing that I located the yellow VIN number placard on our camper to get our unit’s Unloaded Trailer Weight. I went back into the office to pay for the weighs and pick up our weight slips. Then it was time to do some math. 🙂 If you find that you are towing more than you thought you were, then check out my post about our Camper Weight Loss Plan. To see the weigh-in step-by-step, check out these videos:

Anyone else ever had their camper weighed? What did you find out?

For many families making their rounds of the Utah 5 National Parks, a visit to Bryce Canyon is a highly anticipated stop. With its sweeping vistas and spectacular hikes, Bryce offers something for everyone. But with most of the camping options concentrated immediately around Bryce, families that want to escape the crowds and explore Bryce END_OF_DOCUMENT_TOKEN_TO_BE_REPLACED

For many families planning a trip to the Utah region, their itineraries often center on hitting the high points of iconic stops like Grand Canyon, Zion, Bryce, and Arches. Several lesser-known parks are also worth the stop, though, and for families looking for ways to escape the crowds, Cedar Breaks National Monument should be on END_OF_DOCUMENT_TOKEN_TO_BE_REPLACED