If you’re new to camping, you may have discovered that campers and RVers throw around a lot of terms like boondocking, dump station, etc., that may leave your head reeling in confusion. So I thought for this installment of “Camper in Training” it might be good to share a little bit about the different types of campgrounds, campsites, and lingo that you might hear used in the camping world. So consider this your campground glossary. 🙂 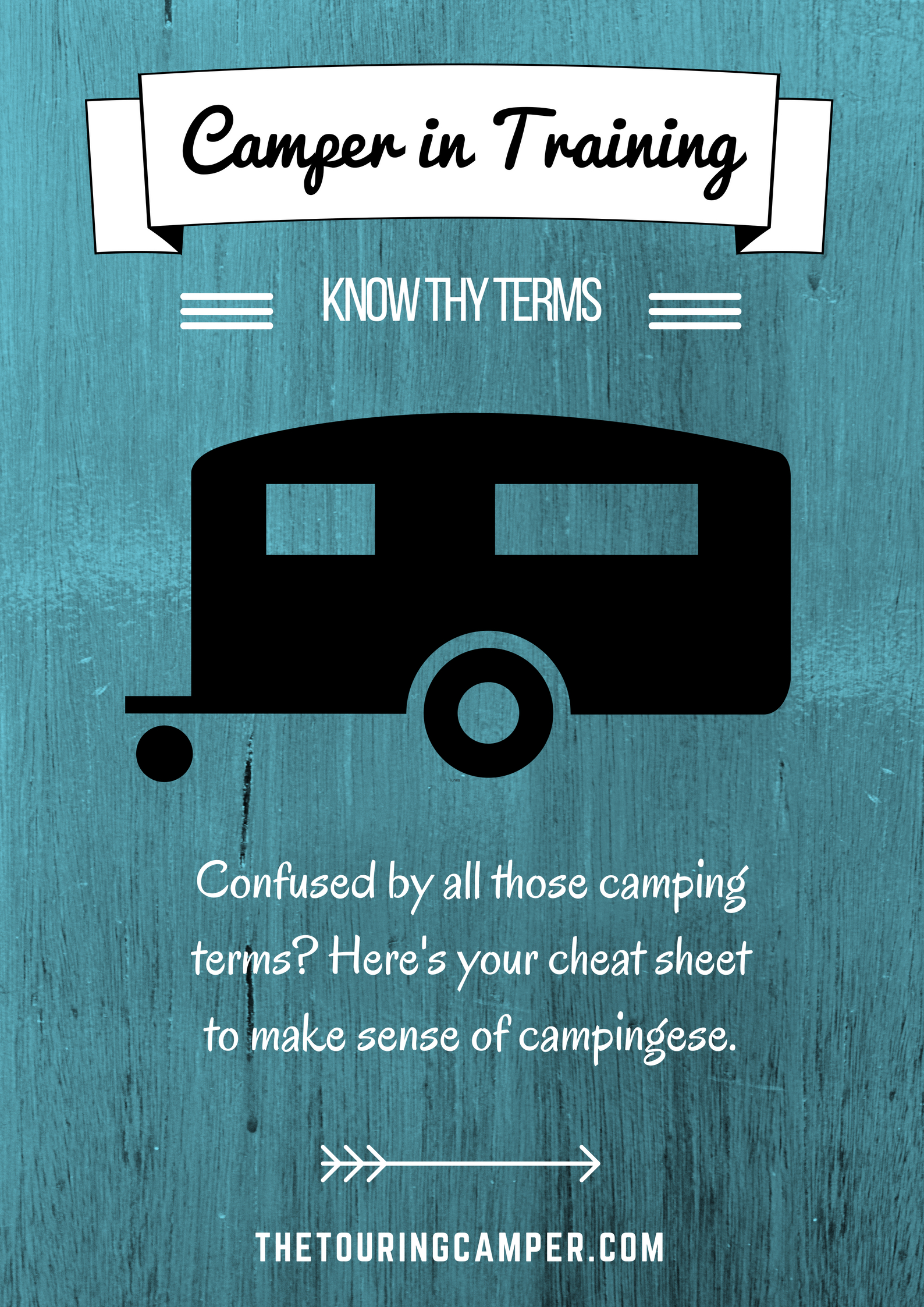 The key element to most (but not all) public campgrounds is that there is a limit to how long you are allowed to camp at the location, and prices of the campsites are generally cheaper.

State Park: Typically managed by a state agency, the type and quality of camping facilities offered will vary by state and region. They can range from primitive camping to some that even offer full hook-up sites. We have typically found state park campgrounds to offer more spacious sites. Most state parks have a 14-day stay limit during the summer and some states will have 21 days during the off-season.

State Forest: Most state forests do not have developed campgrounds but are more boondocking or primitive walk-ins. Many states (PA included) do not have a charge or fee associated with this type of camping, but be sure to check whether a permit is required.

U.S. Army Corps of Engineers: Many reservoirs, lakes, and rivers will have camping areas that are managed by the U.S. Army Corps of Engineers. Since most of these reservoirs, lakes, and rivers will allow larger, higher horsepower boats, these campgrounds will often draw the boating crowd who will have multiple vehicles and lots of “water toys” with them.

National Park: Just because there is a campground at a national park does not mean that you will be able to camp there with a recreational vehicle! Many National Parks have different types of campgrounds for different types of campers. For example in Yellowstone there is only one campground that has full hook-up sites–Fishing Bridge–but you can not have a “soft-sided” camper (i.e. hybrid or pop-up) at this location due to bear concerns. You can not take a camper to Dry Tortugas National Park since it has to be accessed via water-taxi–and all tent camping is considered dry camping (see definitions below). We have also found that many national parks will have strict trailer length limits due to access roads and campground sizes.

U.S. Forest Service: During our 2015 West Trip we saw lots of these campgrounds and we were rather envious of those RVers who had the right equipment to stay in them. They were often very private and scenic sites in prime locations. However, most were either primitive or dry camping (see definitions below for differences) with little to no amenities. Currently we are just not equipped (sadly lacking the tank space and the batteries/generator) to do this to Kristin’s glamping standards. 🙂

County/Local Parks: Some of the nicest campgrounds that we have stayed at (Pohick Bay Regional Park and James Island County Park) have been administered by local park agencies. These will not pop up as frequently in searches and often have more amenities than state parks but will still have the feel of a state park. 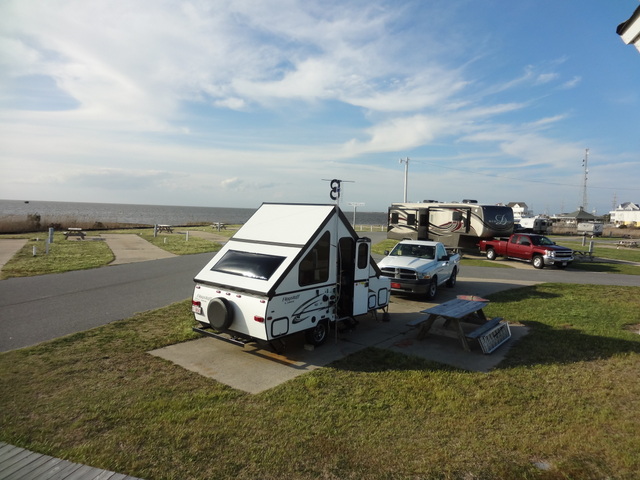 Good Sam and Woodall’s: These are not campgrounds but rather a certification or stamp of approval that private campgrounds will seek. Both groups have a rating system that campers use to rate the campground. These ratings are easily found on each group’s respective website. Additionally you can purchase memberships to these groups and then obtain discounts at their affiliated campgrounds. We have been Good Sam members for several years mainly for the Trip Planning and Roadside Assistance programs.

KOA Kampgrounds: These are a franchised set of campgrounds that are characterized by their distinctive yellow KOA signs. Many are located near major highways or attractions and generally once you have stayed at one KOA you will pretty much know what to expect when you go to the next one since they tend to have a similar feel and offer similar amenities. Many KOAs have planned activities and lots of amenities … but you will be paying higher per-night fees for these things.

Thousand Trails: This is a membership-based camping system where you purchase a membership and then camp for “free” on a first-come, first-serve basis. We have not given this a try yet but may in the future. 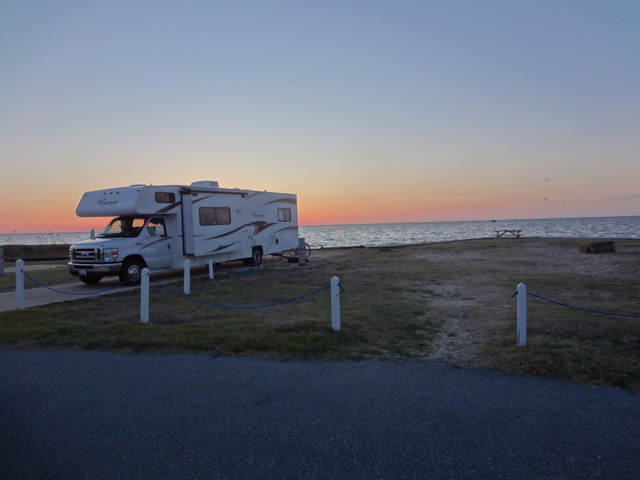 Full-Hookup: A site that has electric lines, water lines, and sewer connections at the site for your use only. You use your own hoses to tap into these connections.

Modern bathrooms: When a campground provides bathhouses that have running water with sinks, flushing toilets, and showers (some will specify hot or cold showers).

Primitive: Typically this means there is not electric provided for campsites and often there will only be pit toilets or latrines available. (If it says primitive with modern bathrooms then individual sites do not have electric, water, or sewer but the bathrooms have running water.)

Dry camping: This is camping in an established campsite where you must bring your own water and haul the waste out (i.e. there is no dump station). There is also no electricity available nor bathroom facilities of any kind.

Boondocking: This is basically dry camping but in places where there are not established campsites. Some places in the West will allow you to camp anywhere you can park your rig, without getting stuck (i.e. beach, desert, forest, etc.).

Walk-up site: These are sites that can not be reserved in advance and are available on a first-come, first-serve basis.

Walk-in site: This refers to tent sites where you have to park and then carry your gear in to the site. 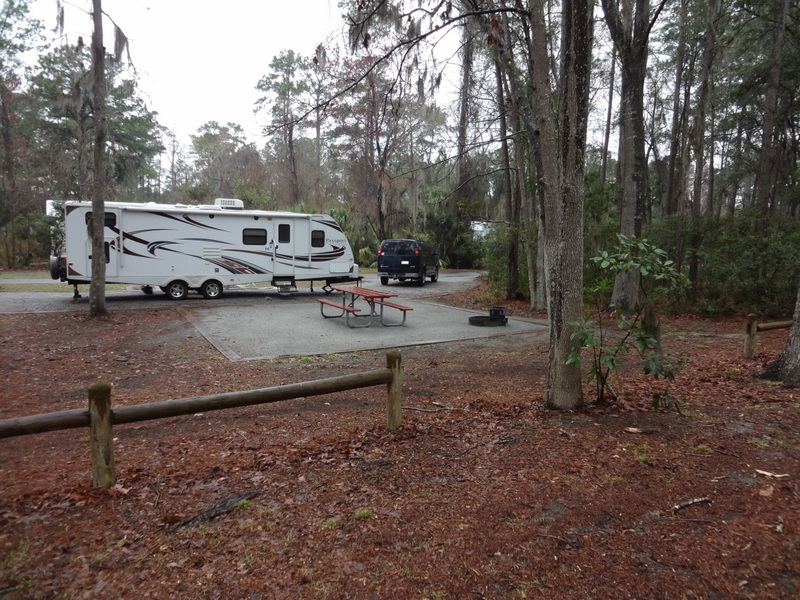 Dump-station: This is a facility at a campground, rest stop, or truck stop where you can get rid of the gray and black water in your holding tanks.

15 amp vs. 30 amp vs. 50 amp: This is the type of electrical connection that is provided at the campsite. The 15-amp (or some places 20-amp) service is a normal outlet like you have in your wall at home. The 30-amp service will have a larger plug that looks like your electric dryer; this is the minimum needed to run most air conditioners and microwaves. The 50-amp service is required on many larger campers and motorhomes since they often have two air conditioners, as well as a microwave, washer/dryer, etc.

Pad material: This refers to the material that is on the ground where you park your camper. These options often include cement, asphalt, gravel, dirt, sand, or grass. Each have their advantages and disadvantages when it comes to leveling, drainage, and the potential for getting your rig stuck.

Length to wheel stop: I have never figured out how different campgrounds figure this out. It is suppose to be the length from where the campsite starts on the access road to the point where the camper tires hit a barrier at the back. However, I have seen some listed at 30 feet that were well over 100 and others that were much shorter than advertised.

So that’s a run-down of camping terms. For more on how to select the perfect campsite, be sure to check out this post: Campground Cruising.

For many families making their rounds of the Utah 5 National Parks, a visit to Bryce Canyon is a highly anticipated stop. With its sweeping vistas and spectacular hikes, Bryce offers something for everyone. But with most of the camping options concentrated immediately around Bryce, families that want to escape the crowds and explore Bryce END_OF_DOCUMENT_TOKEN_TO_BE_REPLACED

For many families planning a trip to the Utah region, their itineraries often center on hitting the high points of iconic stops like Grand Canyon, Zion, Bryce, and Arches. Several lesser-known parks are also worth the stop, though, and for families looking for ways to escape the crowds, Cedar Breaks National Monument should be on END_OF_DOCUMENT_TOKEN_TO_BE_REPLACED